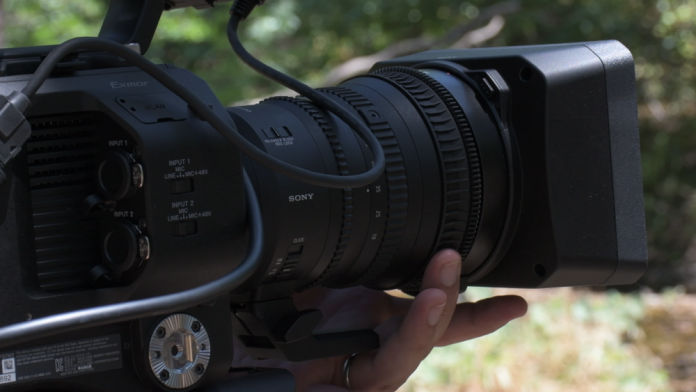 The Sony E PZ 18-110mm f/4 G OSS is a strong lens with a great, highly usable focal length. It offers servo controlled zoom along with a few other party tricks. Announced in September of 2016, the 18-110mm is the second lens in this line. The first attempt, the Sony FE PZ 28-135mm f/4 G OSS is for a full frame sensor. A great fit for an a7S II, but if you consider the crop multiplier when shooting on a smaller sensor, the 28-135mm focal length becomes far less usable. Sony must have learned from the 28-135mm, because the 18-110 hits just about every need in one lens.

We got to test drive the lens while reviewing the Sony FS7 II. If desired, you can buy it as the kit lens for the camera. As you’d expect, because the camera is $10,000 dollars, the kit lens isn’t going to be cheap. In fact, it costs $3,500 dollars. However, it’s affordable considering the overall specs and what it does.

Diving in with Details

Built for APS-C or Super35 sensors, this lens uses the Sony E-Mount. Unlike the other lenses we tested with the FS7 II, Sony measures the lens’ aperture in f-stops. Its aperture range is f/4 to f/22, not super fast, but fast enough. It’s able to get good shallow depth of field in adequate lighting situations. Its biggest party trick is its servo zoom. Switch between manual and servo controlled zooming. The lens focuses internally, making it compatible with matte boxes, though it comes with a lens hood that, minus barn doors, is all you might need.

A stand-out feature for the lens is the integration of optical SteadyShot image stabilization. Zoom all the way to 110mm and you’ll have an effective focal length of 165mm. When using a long telephoto lens, keeping steady will be key. Plus, it has a removable tripod foot for mounting off the lens. Lastly, it has separate control rings for focus, zoom, and iris.

While shooting on the FS7 II, it's apparent that Sony meant this lens to go with the FS7 II. The two are a great match for each other. With the grip of the camera, you gain a pressure sensitive zoom rocker. When combined with the FS7 II, you have the most versatile cine camera on the market.

When combined with the FS7 II, you have the most versatile cine camera on the market.

The first feature that became apparent was how nice the focal length is. It’s wide enough for interview style ENG shooting or shooting in tight spaces. Plus, it’s long enough to get details from afar. The next feature that caught our attention was the focus ring. It has a push-pull mechanism that engages and disengages auto focus. The icing on the cake is its ability to turn on and off clicking on the aperture ring. Get either smooth rotation through the full aperture or have clicks in ? stop increments.

There is one part of this lens we would have liked to have improved. The minimum aperture of f/4. First, with the features of a cinema lens, this lens should have T-stop readings, not f-stops. Second, if it only was one stop faster at f/2.8 we would be much happier. It does, however,  have a constant aperture through the full range of the zoom, and that’s important.

We tested the E PZ 18-110mm f/4 G OSS in our controlled studio to see if the lens has focus breathing and weather in its parfocal or varifocal. We also tested how well the image stabilization and servo zoom worked.

Starting off, this lens has no focus breathing. We found no breathing at 110mm, 85mm, 50mm, 35mm, 24mm or 18mm. Sony says they tried to minimize breathing with this lens, but during our tests, they eliminated it. Continuing to verify that this is a video shooter’s lens, it is parfocal and holds its focus through the full zoom of the lens. That means you can zoom in, focus, then zoom out with the servo and you will keep sharp focus.

Because the form factor of the FS7 II suits run and gun situations, we needed to see how well the image stabilization works. Although it only has two settings, off and on, it works well for most shooting situations. We’d recommend keeping IS on all the time because it will take shaky handheld and smooth it out.

Sony has made an island for themselves that only they inhabit. There aren’t any other E-mount zoom lenses with a servo zoom. The closest you can find is the Canon COMPACT-SERVO lenses, but they are EF mount. With that said, I’m not a huge fan of shooting while zooming. However, in situations you can't control, like those documentarians often find themselves in, a zoom will allow for mood changes and smoother composition changes.

Let’s take a look at what the rest of the industry has to offer in the same space as the Sony E PZ 18-110mm f/4 G OSS. We want to find the most apples to apples comparisons in the market, so we’re going to look to Fujinon, Sigma and Zeiss.

First up, is a pair of lenses: the Fujinon MK50-135mm T2.9 and MK18-55mm T2.9 cine zooms. They cost $4,000 dollars each. They’ll cover a Super 35 sensor and use the Sony E-mount. They have a consistent T2.9 aperture over the full throw of the zoom. They offer three standard 0.8 MOD gears and a clickless nine-blade iris. They are color matched to other Fujinon HK/ZK/XK series lenses and give 200 degrees of focus rotation, along with a macro shooting mode. The front outside diameter is 85mm and both weigh 2.16 pounds.

The next lenses we’re going to look at are the Sigma 18-35 T2 and 50-100mm T2 Cine High-Speed Zooms. They cost $5,000 dollars each and cover full frame sensors. They come in the lens mount of your choice. Choose from E, EF and PL mounts. They have a constant aperture of T2.2 through the full throw of the lens. They have geared focus, iris and zoom control rings. They weigh 3.3 pounds and 4.16 pounds, respectively. Offering a 95mm front diameter and a nine-blade iris, these lenses are more money and have a gap in their focal range.

The last lens on this list, the Zeiss 21-100mm T2.9-3.9 Lightweight Zoom LWZ.3, shows the value in the aforementioned lenses. It’s a whopping $9,900 dollars and it doesn't even have a constant aperture across the full throw of the lens. It’s designed for a Super 35mm sensor has close to 5x zoom range. It has an impressive 294-degree focus rotation and an interchangeable lens mount.

The Sony E PZ 18-110mm f/4 G OSS is the perfect lens for the Sony FS7 II. It excels with its servo controlled zoom and image stabilization. We would have liked it to have a wider aperture than f/4. The image looks nice and it’s rich with usable features.