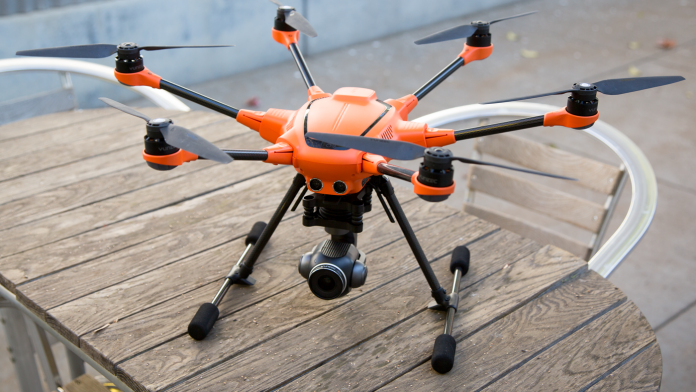 Drones are all but a necessity now in the production world. There is no easier way to up the production value of your next video than to include a few drone shots. Yuneec released their first drone in 2014 with the Q500. Then in 2015, Intel invested in the drone company. Fast forward to CES 2017, and the H520 is announced.

The H520 is a different kind of drone. Its applications are not limited to aerial cinematography. Yuneec calls the H520 a commercial aerial solution. Their list of users reaches far beyond digital content creators to inspectors, law enforcement, contractors and surveyors. For the scope of this review, we are going to judge it as a tool for cinematography.

The H520 is a six-rotor Hexacopter with retractable landing gear. It has an interchangeable gimbal system that will allow you to use one of three hot swappable options. The gimbal has 360-degree continuous rotation and a 7-inch display in the controler. The controller, the ST16S Ground Station, can output a 720p signal via HDMI and includes a DataPilot Mission Control software system for flight plans and automated flight control.

Yuneec shipped the H520 in an optional custom fit hard case with wheels and a rolling handle. The case allows for storage of the controller, more batteries and some accessories. We would recommend considering this case as it’s easy to move around and will protect your investment.

The controller is significant. The screen is large, but the controller itself is bigger than most. Yuneec includes a hood and lanyard. The lanyard is necessary at all times and the hood is a nice added value for viewing in the bright sun. The size of the controller is both good and bad. It’s good because the size allows for a screen to be included and makes the controller relatively simple to use. There are a number of switches, buttons and controllers for analog control of the gimbal, landing gear, and more. You don’t need a cell phone to operate the drone, and you’re ready to fly right out of the box. However, the size also makes the controller more cumbersome. With a hand on each side of the controller to reach the joysticks, the stance needed to fly is something you’ll have to get used to.

Before you take flight, make sure you know what all of the controls do. How bad would it be to get in the air and have to continually try to read what each control did? The good thing is the controller is clearly labeled. Whenever we fly anything for the first time, we first make sure all the flight controls work and are adjusted as we require. Next, we go through all of the shooting modes, resolutions, and use all of the exposure controls. It took us a bit to get used to how the tilt worked — it’s a bit touchy and will require a little time to get used to.

Starting with powering the controller up, then the aircraft– we noticed that the placement of the power button on the hexacopter made it hard to see whether it was on or off from our viewing angle. However, there is a tone that plays to let you know if the drone is powering up or down.

Yuneec does a good job of making the feel of flight the same, regardless of the flying mode or setup.

Our first flight was just after dawn on a windless morning. On our first flight, we wanted to see how it felt in the air. Like the Typhoon H we flew previously, the H520 is light in the sky. It’s quite nimble and very responsive. Before we got too high or far away, we wanted to see what the difference is between flying characteristics with the landing gear up and down. When flying with the landing gear down, the aircraft pitches more, though the video does not reflect this, nor does the way it feels on the controller. Yuneec does a good job of making the feel of flight the same, regardless of the flying mode or setup.

The E90, with its higher bit rate, top frame rate and larger sensor, is the obvious choice for video productions and film applications. We’d love if both the E90 and E50 had the same video specs. Being able to shoot from a distance because of the longer lens of the E50 is handy, especially if you are shooting people. As a drone pilot, you should always be thinking about mitigating your risk for injury to people and damage of property. Because you can be further from your subject, a longer lens would decrease your liability. The thing to keep in mind, though, when flying manually is that you will need to slow down your moves. Having a longer lens is helpful, but it gives you a much narrower field of view, requiring more controlled movements. Get around that by programming your flight and letting it shoot on its own. Be careful about programming a flight path. Again back to mitigating any risks, make sure to say attentive to the drone and the controls as if you were actively controlling it. Keep in mind, if you are shooting something where you can't control the pacing of the subjects movement, autonomous flight could add difficulty to executing the scene.

Moving on to how the video looked, the footage from the E90 has a nice image quality. We didn't see any micro vibrations in the footage. There was good detail and the color looked nice. Because of the 100 Mbps bitrate, we didn't see any tearing even when flying fast.

While on one of our flights, while flying over a vernal pool, we were getting a fair distance from the controller. We still had line of sight on the aircraft and we lost video transmission. At that time we were at most 2,000 feet away. Yuneec claims more than 5,000 feet. This is a pretty large discrepancy.

Just a few years ago, there were a plethora of drones to choose from. The drone boom is over, because the H520 has only one drone that is currently in production to compare it to.

The DJI Phantom 4 Pro+ costs $1,800 dollars. It has a 1-inch 20 megapixel CMOS sensor and will fly autonomously. It has a much futher maximum control range of 4.3 miles and a top speed of 45 miles per hour. The Phantom 4 Pro+ does not have retractable landing gear and doesn’t have the ability to mount any other camera on it. The Pro+ does come with a screen mounted on the controller.

Yuneec put a lot of options in the H520, many of which are not tools for digital content creators. With that said, it’s a good drone with a longer battery life and shoots good looking video. If you want to be able to swap out cameras, there aren’t any competitors anywhere close to the cost of the H520. If you are looking for a feature-rich option outside of DJI, the H520 should be on your list.

The Yuneec H520 has three swappable cameras to choose from. It’s got some great features for video production and more.

Chris Monlux thinks drone footage is being overused these days. He is also Videomaker’s Multimedia Editor.