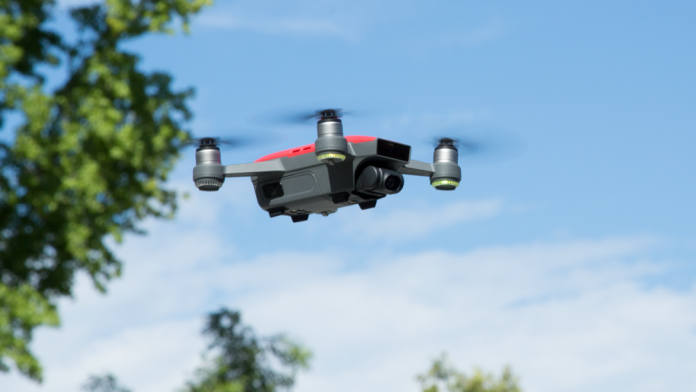 DJI is in a fury to own all of the airspace in the drone market. With the introduction of the Spark, DJI now has a drone for every budget. They offer drones as affordable as $500 dollars for the Spark, all the way up to $6,700 dollars for the Inspire 2. Even with that wide price range, they continue to offer the same user experience no matter the cost. This is one reason DJI is the leader in drones.

DJI announced the Spark in late May of 2017. It features a two-axis stabilized gimbal camera and shoots up to 12 megapixel pictures and 1080p/30 video. It has gesture and TapFly control, including flight autonomy with obstacle detection. Don’t think because it’s small that it’s slow; it has a top speed of 31 miles per hour. DJI says it has a control range of 1.2 miles and up to 16 minutes of flight time. Lastly, while using the DJI GO 4 app, you can control the drone, edit its video and share footage straight from your phone. It has a compact controller that is almost identical to that of the Mavic Pro. It’s just missing a digital display. It’s an easy set-up to grab and throw into your backpack to take on the go.

For $500 bucks you get the drone, a storage box, a battery, two extra propellers, a charger and a micro USB cable. Notice anything missing there? Yup, the controller is not included at five hundred dollars. App control and gesture control will not cut it. We wouldn’t consider recommending the Spark without the controller. Outside of that, the case is a nice addition and will help you keep your drone safe when not in flight. However, it doesn't fit the controller. The case is a molded piece of styrofoam; it works well, but is cheap to produce. We would have liked to see it have a molded niche, where at minimum you could strap the controller onto the case.

In the Air and on the Job

Before we get into our use, we want to state that you should always practice safe flying, following all laws in your area and stay out of restricted flying areas. If your country requires you to obtain a licence before flying, do so.

We started the evaluation by first getting the drone ready for flight. Every DJI drone we have tested has required firmware updates. During this review alone we conducted three updates.

One of the pilots relatively new to flying had flown the Phantom 4 Pro +, and she noted that other than the drone looking different, the user experience was the same.

On a Friday afternoon, we invited anyone on our staff who would like to try flying a drone to do so. We set up in our parking lot and gave the necessary instructions, so that first-time pilots would understand what they should and should not be doing. We felt it necessary to test the Spark with novices because of its price point. One of the pilots relatively new to flying had flown the Phantom 4 Pro +, and she noted that other than the drone looking different, the user experience was the same. This is DJI’s best design throughout their drones. Regardless of what price you pay for your drone, they all feel similar and interface the same.

Flying can be intimidating, but because of the Spark’s size, it feels safer to be close to. That's good for one of the flying modes: gesture. With arm and hand movements, the pilot is able to fly the drone and capture both photo and video. Although this is a neat feature on paper, it’s very much a gimmick. It sounds fun to take a selfie with the control of your hands. In practice, it’s not very usable.

One of the few firmware updates did upgrade this feature for better control (and to include video) but it’s still better as marketing material than as a feature. With that said, it’s so easy to fly, why complicate it by having vague control through camera recognition of your gestures? It is a much better choice to use the controller. All of the new pilots had no problem taking off, flying and landing. If you are new to flying drones, the Spark is a great place to start.

The next flying situations we took the Spark into was while on vacation in Myrtle Beach, South Carolina. Because of the price and size, it lends itself to coming along with you, even if you don’t have a plan to fly. The beach can be a difficult place to fly. Outside of dawn and dusk, we had significant wind to compete with. During the day, when most windy, the beach was crowded with people. We didn't fly when there were too many people; it’s just not a good idea. We did fly on a windy evening, and although we were not able to move forward when flying into the wind, the Spark stayed upright and stable. For it’s size, DJI has made a very stable drone. It really sings in the sky.

We flew it low over the sand and ocean. Although it rattled our nerves, there were no issues. Flying over water increases the liability of total loss if something were to go wrong. Because of this, we limited our exposure to the water and kept caution not to crash when flying low.

Lastly, we flew it indoors back at Videomaker Headquarters in California. The Spark is so easy to fly, at no time, regardless of how many obstructions we had in our air space, did it feel dangerous. We didn’t hesitate to fly it indoors. Just know what there is to collide with and get to shooting. Because of the rotor blade design, it's likely you could have a slow speed crash and have no damage done to the aircraft.

We were impressed with the image quality. If you needed better resolution or more smart flight capabilities, buy the Mavic Pro. The dynamic range isn’t great, but for $500 bucks, it’s good enough. Even though Spark only has a two axis gimbal, movements along the third axis can be achieved through movement of the drone. All the footage was steady. The only micro vibrations we experienced were during takeoff and landing. We wouldn’t hesitate to use it for a shot or two of professional work. It’s not the choice for a full time drone pilot, but if you need a different vantage point, it will get the work done.

Starting with the battery, DJI’s assessment of 16 minutes per flight is about right. The biggest sway in battery life is the conditions and the type of flying you’re doing. Fly more aggressively and you’ll drain the battery faster. In the same vein, fly in windy conditions and you’ll get less from the battery. A consistent flight with no wind does at least 16 minutes per battery. Over all flights, regardless of the conditions or the type of flying–we saw at least a 14 and a half minutes flight time.

When it comes to firmware updates, DJI is the worst. Its great they want to keep updating the drones to make them better. However, we’d rather they have the strategy of testing issues before the products are released. We experienced three separate firmware updates during our month-long testing. Yes we had an early release, but three is excessive. It would be understandable if this was a one off issue that they caught at the wrong time, but we have experienced this with every single DJI drone we have evaluated. Phantom 4, Phantom 4+ Pro, Mavic Pro, Inspire 1 and Inspire 2 all required multiple firmware updates. We hope that DJI will hear us this time — please perfect the drones before you release them.

DJI looks to be creating a drone for every budget and need. This is the lowest price point across their current model line. To validate its overall value, let’s look at two other current and one not-so-current drone models and compare their features to the Spark.

First, let’s look at the Parrot BeBop 2. It has an MSRP of $550 dollars, $50 dollars more than the Spark. They both shoot full HD video but the BeBop 2 offers electronic image stabilization versus the two-axis stabilized gimbal on the Spark. The BeBop 2 only has a 984 feet control range versus 6,336 on the Spark. The Parrot also only offers eight gigabytes (GB) of on-board flash memory, whereas the Spark offers a microSD card slot up to a 64GB card. Both drones have sensors for obstacle detection. The BeBop 2 is just slightly faster with a top speed of 35.5 miles per hour (mph) compared to 31 mph with the Spark. Lastly, along with the increased speed, flight time is better with the BeBop 2 with 25 minutes over 16 on the Spark.

Next up is the AEE AP11 at $700 dollars. It is capable of a higher max frame rate of 60 frames per second in full HD compared to just 30 with the Spark. The AP11 also betters the Spark with an extra axis of gimbal stabilization, with a 3-axis gimbal. Plus, it has a max speed of 44 mph and it can fly up to 22 minutes but has a 1,640 feet control range. The AP11 has no obstacle detection but, like the Spark, it records to microSD.

Lastly, we look at a bit of old tech, the discontinued DJI Phantom 3 Standard. The drone is still widely available new; DJI just doesn’t manufacture them anymore. It has a humble cost of $500 dollars and has a 3-axis gimbal. It can shoot up to 2.7K, but has a limited control range of 2,236 feet and records to MicroSD. It offers no obstacle detection, but has an impressive 25 minute flight time. Lastly, it is just a bit faster than the Spark at 35 mph.

With every new drone, DJI hits great value and usability. The Spark is no different. It flies great, captures wonderful looking video and has a reasonable price. It’s a great fit for shooting on vacation or for some light paid work. We wish the included case also held the controller and that the drone didn’t need as many firmware updates. Be sure to buy extra batteries so you can stay in the sky longer. If you don’t own a drone, but want a solid entry-level aircraft with good video capabilities, Bob’s your uncle and the Spark is for you.

The Spark is affordable at 500 dollars. It offers full HD video and 16 minutes of flight time. The case it comes with could be better, and DJI needs to get its firmware updates under control, but beyond that, the Spark is a good value and the video looks great.