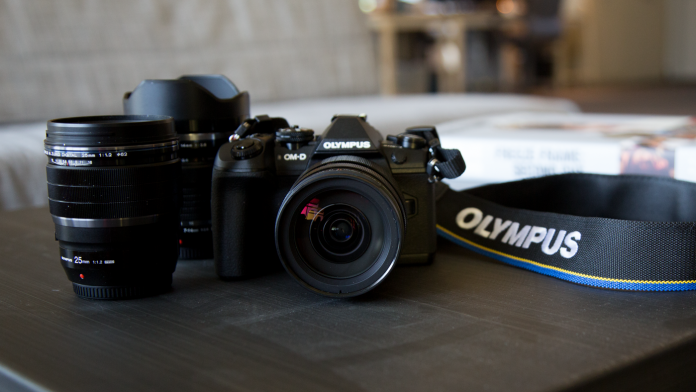 Olympus isn’t often mentioned in the video world. But with the OM-D E-M1 MKII Olympus came out swinging with a feature rich camera. At the time of its release in 2016, the E-M1 MKII boasted some forward-thinking features like 5-axis sensor-shift image stabilization, a fully articulable screen and face detect autofocus. If you are a hybrid shooter, needing both photo and video capabilities, you might be looking at this and similar cameras. In this review, we’re only going to address its video features — after all, we’re Videomaker.

The E-M1 MKII has a Micro Four Thirds (MFT) 20.4MP image sensor and a TruePic VIII Dual Quad Core Processor. The viewfinder is a 2.36m-dot LCD and it has a fully articulating 3-inch 1.04m-Dot touchscreen. It shoots up to DCI 4K at 24 frames per second (fps) and 30 fps in UHD 4K. Its 5-axis sensor-shift image stabilization lets you shoot video handheld without shake or support. It is also weather-sealed and offers a Dual F.A.S.T. 121-Point autofocus system.

The camera has a nice weight and fits easily into your hand. The grip is a bit deeper than the E-M1 MKI. The knobs, buttons and dials have a good feel and are robust enough to handle heavy use. The articulating screen is a great feature. It allows you to shoot from any angle and still see your shot. Along with that, the camera is vlog ready since you can see yourself and record at the same time.

The OM-D E-M1 MKII has incredibly fast continuous photo capabilities. It will shoot 20.4 megapixel stills at rate of 60 frames per second, and can continually autofocus at 18 frames per second. That kind of speed is unheard of. For shooters who consider themselves photographers first and videographers second, this feature may be enough to push them toward the E-M1 MKII, and for good reason.

Starting out with the M.Zuiko Digital ED 7-14mm f/2.8 PRO, it has a manufacturer's suggested retail price (MSRP) of 1,300 dollars. It is the 35mm equivalent of a 14-28mm — a great walking around lens. We gravitated to using this lens the most. It has an aperture range of f/2.8 to f/22 and has no lens coating. It is f/2.8 across the full length of the lens. It is compatible with both video and photo autofocus (AF) and has a weather-resistant construction. The lens is internal zooming and has a 7-blade iris. Lastly, our favorite feature that all the lenses share is push-pull AF engagement on the focus ring.

Lastly, we shot on the Olympus M.Zuiko Digital ED 25mm f/1.2 PRO with an MSRP of 1,200 dollars. It has a 35mm equivalent of 50mm and an aperture range of f/1.2 to f/16. This lens has nano Z coating and is internally focusing. Unlike the other two lenses, it has a 9-blade iris, but also shares a weather-resistant construction.

We shot with the E-M1 MKII in Reno, Nevada at the annual Hot August Nights car show. This was a great situation to get to experience the sensor stabilization because most of the shooting was handheld. Because the shooting conditions varied from indoors to outdoors and from sunlight to under the lights, we were constantly changing exposure. This gave us hours upon hours of using the exposure controls of the camera.

The first thing we noticed was our desire to have one more dial for exposure manipulation. You can either control ISO and aperture or ISO and shutter speed. If you need to change all three, you will need to use one of the directional buttons on the back to toggle between shutter and aperture control. Because of this, we had a few situations where what we wanted to shoot and the moment passed us by because we were making exposure decisions. This isn't a deal breaker, as muscle memory would set in after owning and using a camera for a good amount of time, but would make the camera faster to use if another dial were included.

The menu layout is not intuitive and many options are within submenus. We don't understand why it’s so hard to make an easy-to-use menu, but it seems most MILC and DSLR camera’s have a weak menu system.

We like the fully articulating screen. It makes getting low or high angle shots much easier, because you can see what you’re shooting. An additional benefit is being able to shoot selfies or a vlog. In bright sun, the glare on the screen wasn’t great, but you could still see the monitor, as it’s quite reflective.

Because there are so many parallels with this camera and the GH5, we hoped that Olympus, like Panasonic would find a way to eliminate the 29 minute record limit. However, they did not. This is only an issue if you shoot long clips, like for a wedding or a presentation.

Like with all of our reviews, we test key features to show what limitations the cameras have under controlled lighting and in studio conditions. We’re going to address two key features: its low light performance, or when is noise introduced into the picture, and rolling shutter.

For our low light test, we increased the ISO starting from ISO 200 and doubling it until we got to ISO 6400. At the same time at each stop of light, we also increased the shutter speed to keep the same exposure. This tells us at what ISO you can shoot with the camera before noise is introduced into the picture. All the way up to ISO 800, any noise experienced wasn’t a concern for us. At ISO 1600 noise reduction will be necessary and anything above that is too noisy to use. We would have liked to have seen no noticeable noise until at least ISO 1600, but 800 is usable if you have fast lenses. For video, we recommend a f/2.8 lens.

Unfortunately for the E-M1 MKII, the marketplace is littered with competitive cameras. In fact, Videomaker has reviewed the three we are going to look at within the past year. Let’s look at the Nikon D7500, the Sony a6500 and the Panasonic Lumix GH5.

The Nikon D7500 is 1,250 dollars. It’s the only DSLR we’ll look at, but it’s the most cost-effective option out of the three. It offers both headphone and microphone inputs. It has a largest sensor in the group as well, with a 20.9MP DX-Format CMOS sensor. Its screen tilts, but isn’t fully articulating. Both the E-M MKII and the D7500 shoot UHD 4K. The D7500 also lacks sensor stabilization, one of the highest valued options on the E-M1 MKII. Although the camera body is a better price, keep in mind that if you don’t already have Nikkor lenses, you’ll need some. However, the 750 dollar difference in price is a good place to start.

Next up is the Sony a6500 at 1,400 dollars. It’s the best buy of the bunch, with two big drawbacks: a combo headphone/mic jack and bad rolling shutter. It has a 24.2MP APS-C Exmor CMOS sensor and shoots up to UHD 4K 30 fps. Like the Nikon, it only has a flip out screen, meaning it can only tilt, not fully articulate. It also has sensor stabilization like the E-M1 MKII. Where the a6500 gets its value is it keeps up with the E-M1 MKII while it also offers S-Log3 Gamma, up to 120 fps recording in HD and excellent low light capabilities. In fact, it beats the Olympus by three stops with noise introduced at ISO 6400. With all that extra value and costing 600 dollars less, looking past the headphone/mic combo jack and rolling shutter performance could be possible.

The last option is the Panasonic Lumix GH5 at 2,000 dollars. Both the E-M1 MKII and GH5 are MFT with a two times crop factor and have two SD card slots. They have almost the same photo resolution with the GH5 having 20.3MP and the E-M1 MKII with 20.4MP. With the same exact price, you get everything that the E-M1 MKII has plus internal 4:2:2 10-Bit UHD 4k at 30 fps and anamorphic 6K. On top of that, you can upgrade to v-log for 100 dollars. If it wasn't for this camera, the E-M1 MKII would be top of its class, but because of it, it’s the dog of its category. The GH5 is as close to an apples to apples comparison as we can get, and it beats the E-M1 MKII in every category videographers care about.

The Olympus OM-D E-M1 MKII is a nice camera. The video it shoots looks good and its build quality is to be commended. We would have liked another exposure control dial, a better menu layout and better low light capabilities. For people who consider themselves video shooters first and photographers second, this camera is a hard sell. If it wasn’t for the GH5, this camera would be a hard one to ignore, but instead, it’s easy to look over. We liked the camera; it did everything it said it would and did it well. The 60 frames per second burst shooting was incredible. However, our reservations for video shooters are more on the overall value of the video-specific features compared to its competition, rather than whether or not it is a quality camera.

The Olympus OM-D E-M1 is a Micro Four Thirds camera that shoots UHD 4K and has 5-axis sensor stabilization. At 2,000 dollars, it offers lots of great features for the video shooter.

Chris Monlux’s drink of choice is an Americano with cream and sugar. He is also Videomaker’s Multimedia Editor.