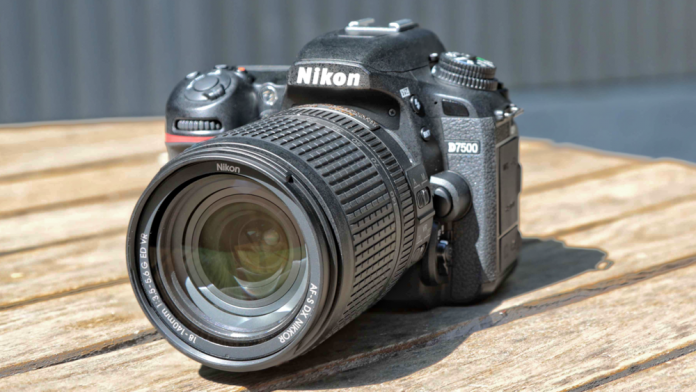 The D7500 has a DX sensor. For those who don’t speak Nikon yet, that means it is APS-C with a 1.5X crop factor. To find the actual effective focal length of a lens on this camera, multiply the focal on the lens by one and a half. Would we have liked it to be full frame? Sure, but the price does not warrant higher expectations. This is a larger sensor than Panasonic’s GH5 Micro Four Thirds (MFT) sensor which has a two-times crop factor. And it’s roughly the same size as the Sony a6500 with its Super 35 image sensor. The D7500 has an ISO range of 100-51,200 but is expandable to 1,640,000 — just like its big brother the D500. It also offers an external microphone and headphone jack.

If you’re in the market for a camera for both photo and video, the D7500 is a smart direction to look in.


If you’re in the market for a camera for both photo and video, the D7500 is a smart direction to look in. Nikon doesn't make a battery grip for it but you’ll get up to 950 shots or 80 minutes of video with each battery. For an additional cost of $60 dollars, you can buy an extra EN-EL15a battery.

The D7500 has only one SD card slot, but you can record to an external recording device. Recording externally let’s you capture uncompressed 4K via the HDMI output of the D7500 — a very cool option.

The Inside and Outside

Nikon upgraded the internals of the D7500 from its predecessor, the D7200. It shoots up to UHD 4K at 30fps, 60 fps in full HD and 8 frames per second when shooting burst photos. For all vloggers, the D7500 doesn't have a full articulating screen, so you will need a different solution for monitoring yourself with this camera.

The D7500 looks and feels tough. It's weather sealed, adding to the ruggedness of the camera. It allows you to shoot in pretty much any weather condition you’re willing to shoot in. It feels solid and well-built. It weighs a bit under one and a half pounds, which is light for a DSLR but is still feels hefty in the hand. It doesn’t feel like a toy, whereas some smaller mirrorless cameras sometimes do.

In Our Hands and In the Field

New Nikon users will experience some key differences in the D7500’s operation. Nikon cameras offer focus and shutter controls that move in the opposite direction as other brands. Given enough time, muscle memory will settle in. The initial discomfort will wear off. It shouldn’t deter you from this camera and all the options it offers. At first, it might be a bit frustrating, but keep calm and you’ll get used to it.

We are always looking to get to know a camera and discover its perks and its quirks. We took it out while we were testing the Sony FS7 II to shoot some b-roll for its review and stills for Instagram. This was our discovery shoot where, without knowing much about the camera, we took it for a spin. Later, we challenged all pain points we discovered and tried again. For this review we shot the kit lens — the NIKKOR 18-140mm f/3.5-5.6. It's acceptable as a kit lens, but wouldn’t have been our first choice. The changing aperture across the focal range is not conducive to shooting video. When using a changing aperture zoom lens, we shoot at the higher of the two maximum aperture settings — in this case f/5.6. This made it possible to change the focal length and not have to change the exposure.

We mentioned that Nikon, in some ways, operates differently than other brands. But even within Nikon brands, we have experienced the zoom and focus rings to be in a different order, depending on the lens. With the 18-140mm, the focus ring is closest to the lens mount point. If you have a tripod with a long plate, you'll have impaired control of the focus with the tripod plate. Luckily, if you have a shorter plate like we happened to have, it shouldn’t be an issue. At worst, you’ll need to buy a new tripod mount plate.

We love the convenient location of the digital zoom button. These are the dedicated buttons for zooming in and out while in live view. They allow for a quicker and easier focus. It’s key to create well-focused images, and their locations make that easy to do without any added hassle.

Generally, the camera’s menu was very straightforward and easy to explore. The menu is completely accessible via touch screen, which made navigation easy. The D7500 has both Wi-Fi and Bluetooth functionality. It requires the use of an external app downloaded to your smartphone for control. The app offers the ability to pull an image off the camera. It also offers hands-free shooting and shows you the remaining battery life in exact numbers.

We administered a series of studio tests to see how the camera performs in a controlled environment, starting with a low light test. We began at an ISO of 100 and doubled it until we reached the camera’s limit. We increased the shutter speed at the same time to keep the exposure consistent. Then, we pulled it into our computer to look for noise in the image. We applied a subjective assessment to tell us what would be the highest ISO level operators should use for professional results. In the case off the D7500, noise started to become noticeable at ISO 400, and by ISO 800 we felt the need to use some noise reduction. The D7500 isn't great in low light. In fact, it’s pretty poor when compared to the Sony a6500 or the Panasonic GH5 that are both usable up to ISO 6,400.

We next moved on to testing the color profiles or, as Nikon calls them, Picture Control. Picture Control consists of auto, standard, neutral, vivid, monochrome, portrait, landscape and flat. These color settings are what they sound like–there’s nothing too deep there. However, the D7500 also has color effects. Access those effects via the dial on the top of the camera. This is where you’ll find the mostly tasteless filters. Choose from low and high-key, miniature, night vision, photo illustration, pop, selective color, silhouette, super vivid and toy camera color profiles. High-key and low key are the only two profiles that do anything more than stylize the image. High-key ensures the image is properly exposed when there is a lot of bright light or white. A bright white image can cause trouble when trying to achieve proper exposure. High-key aims to reduce that struggle. Low-key is the exact opposite; use it for a dark image and it makes sure the image is not brightened too much. This would reduce the intentional drama of the shot. However, if you were looking to achieve anything else with any of the other eight styles, you're better off applying it in post. Images shot with an effect cannot return to their original state. We advise against shooting in the stylized effects since the effects cannot be undone.

Next, we wanted to test the frame rate options the D7500 has, to see how well it could produce slow motion. To achieve slow-mo we overcranked the camera to 60 frames per second for a playback of 24fps. This gives you roughly two and a half times slow-mo. 60 frames per second is enough to give a small amount of a surreal feel to your video. However, higher frame rates would have been nice and would have increased the usability of this camera for this kind of effect. A 60 frame per second overcrank is suitable for creating elegant drama.

The D7500 has a rolling shutter, which means that, rather than capturing the image all at once once, it scans the scene from top to bottom, collecting data as it goes. This creates jello looking lines when panning. Rolling shutter can cause some image distortion, but in the case of the D7500 it isn’t anything noteworthy. The only time we experienced issues with rolling shutter was in the case of a very fast whip pan. We weren’t concerned with The D7500's rolling shutter.

When reviewing a camera, we like to see how it stands up against other cameras in the marketplace. We like to see if the camera’s features match up to its price. We look for cameras with similar specs and compare, determining which camera gives you the biggest bang for your buck.

One similar camera is the Sony a6500, which costs a bit under $1,400 dollars. The D7500 is a traditional DSLR camera whereas the a6500 is a mirrorless camera, resulting in a smaller, more lightweight camera body. Both the a6500 and the D7500 feature 4K recording capabilities and a cropped sensor. However, the  D7500’s mirrorless brethren, the a6500, takes the cake when it comes to resolution, featuring 24.2 megapixels. But what the D7500 lacks in resolution it makes up for in battery life. The a6500’s battery will last about an hour; the D7500 has a bit more capacity being able to shoot for 80 minutes. Another pain point is that the D7500 doesn’t have (that the a6500 does) — the a6500 lacks independent mic and headphone jacks — an essential feature for video shooters.

Another option is the Panasonic Lumix GH5 which costs $2,000 dollars. Both the GH5 and the D7500 shoot in 4K, and each camera has both an external microphone and headphone jack. They both feature articulating screens, but the D7500 only allows the user to tilt the screen. Contrastly, the GH5 allows for complete articulation including selfie mode, which could influence your decision if you’re looking for a vlogging camera. The GH5 also has a two-times crop factor — higher than the D7500, which only has a one and a half times crop. When compared to the GH5, the biggest feature the D7500 lacks is 10-bit video. Whether the fully articulating screen and 10-bit video is worth the $ 700-dollar difference in cost is up to you.

The last camera option is the Canon EOS 80D which costs $1,200 dollars. What you get is a 24.2 megapixel sensor with a 1.6 times crop via its APS-C sensor. A big negative for the 80D is it doesn’t offer 4K recording. However, you’ll get more resolution with the 80D when shooting photos. The D7500 also has a leg up when it comes to ISO range, the max range of the 80D is 25,600 compared to the D7500’s 51200. But the 80D does have a fully articulating screen, including selfie mode which could make all the difference if you are looking for a vlogging camera.

The D7500 is truly a high-quality camera confined in a consumer-grade package. Its features are impressive, and its price tag is fair. It produces a good looking image and because it’s feature rich, it doesn’t leave us wanting much more. With all things considered, this camera’s perks definitely outnumber its quirks. It performed as expected, and its value for videographers in many ways exceeds that of its closest competition.

The Nikon D7500 is a small, robust and powerful camera. The image quality is great and it’s packed full of features. It will perform well in most video-making environments.