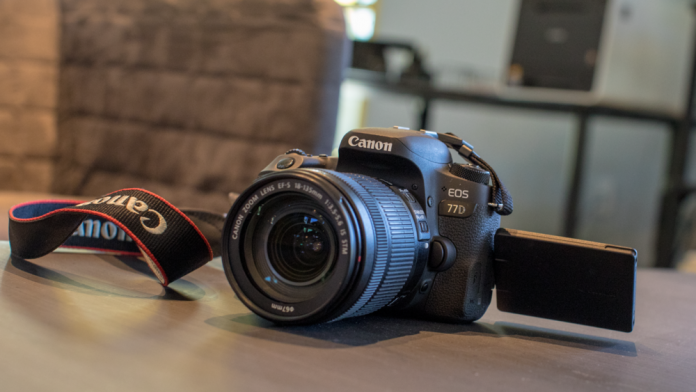 Say it with me: “Seventy-seven D” — not “seventy seventy.” By far, this is the silliest name for a camera on the market. Upon hearing the name, you might conjure up a 7D crossed with a 70D — you’d be wrong. Maybe it’s just like the 80D but with less features — you’re getting closer. The 77D is really a T7i with some additions.

The Canon EOS 77D has a 24.2MP APS-C CMOS Sensor and DIGIC 7 Image Processor. It shoots 1080p video up to 60 fps. If offers a flip out touchscreen and has built-in Wi-Fi with NFC and Bluetooth. It offers 45-point all cross-type phase-detect autofocus and dual pixel CMOS AF.

How different is it from the T7i?

The 77D is almost the same camera as the T7i. They share the same image sensor and the technical specs are all the same. Both cameras offer the same deep grip that feels nice in the hand. The T7i is lighter by 30 percent. The big gain with the 77D over the T7i is the top deck display. That top deck display in essence costs you 150 dollars, and in our opinion, it’s a good price to pay to be able to quickly access your settings. However, it’s a bigger gain for photographers than videographers, because the settings are displayed over the video in the monitor during shooting.

Just like with the T7i, the 77D is a great vlogging camera. It shoots just HD, but because of the flip out and articulating screen, it’s perfect for selfies. It has the controls you need to manually expose at your fingertips, so it’ll give you a better ability to control how you choose to show your story.

Taking it out on a discovery shoot, its size and grip got our attention first. The camera is light, but not too light. It doesn't feel cheap at all. The hand grip is deep and fits nicely in your hand, regardless of the size of your hand. Although the camera is smaller than the 80D, it doesn't feel as small as a mirrorless camera. If you like the heft of a DSLR, then the 77D doesn’t disappoint.

We shot in the bright afternoon sun. Because of that, we felt the flip out screen didn't get bright enough. It was difficult to see. This caused us to struggle with both focus and proper exposure. To work around this, had to shade the screen, make the required adjustments and continue shooting.

Right off the bat, we saw that the image quality of the 77D has the Canon look.

Our typical tests for Rolling Shutter, low light and battery life for the 77D scored the same as the T7i. We did experience some rolling shutter, but it’s not significant and isn’t a good reason to pass on this camera.  When it comes to low light, we started to see noise at ISO 400 and anything Over ISO 1600 is too noisy to use professionally. The battery in the 77D is the same as the T7i. The LP-E17 battery is 20 percent smaller than the LPE6N found in the 80D and up. But with it’s size, the battery performed quite well with an average life of two hours, forty minutes.

The 77D has performed quite well. However, the marketplace for video is much further along that Canon is, but average cost is a bit more. To understand the market, let’s look at the Sony a6300 and the Nikon D7200.

The 77D is just slightly different than its little brother the T7i. We like the added top deck display and find it worth the extra cost. It’s the most feature rich camera for its price point, though there are cameras with better options for just a few hundred dollars more. The camera isn’t a dynamic range monster, but does have the Canon look. We liked the camera, and its price makes it a great option.

The Canon EOS 77D has the same body as the T7i. For 150 dollars more than the T7i, you get a top deck display. We liked using the camera, though it doesn't have great dynamic range.

Chris Monlux loves the smell of the mountains. He is also Videomaker’s Multimedia Editor.