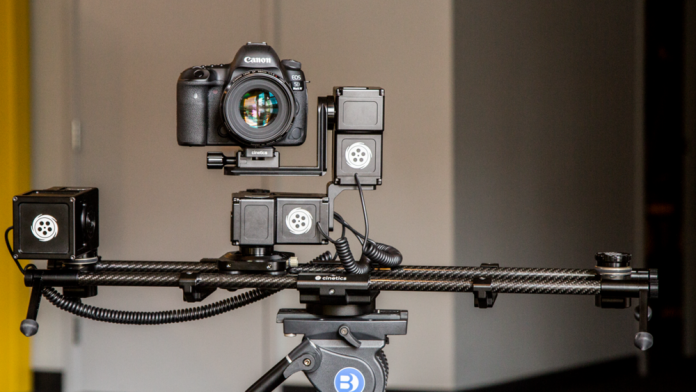 Fast forward from their first product in 2011 to today, and Cinetics has grown to seven products with the addition of Lynx; a camera slider and multi-axis motor control system.

Fitting with their history, the Cinetics Lynx is a kickstarter project, and we were lucky enough to get one in to review prior to the project launch — so our review is based on a pre-production sample. Lynx is available in three primary kits: Slider, Motorized Slider and Three Axis Slider. But it’s more than that; Lynx has a fun option with its capability of being controlled through bluetooth via their app on your phone. Control wirelessly via a touch joystick and you can even control it via your phone's accelerometers. During the funding phase on Kickstarter, Cinetics is discounting Lynx by $500 with it’s introductory price of $1,500. Later, it will be offered with a MSRP of $2,000.

Motion control reviews are lots of fun — the more movement the better. With 3 motorized movements, slide, pan and tilt, the camera can go up down and backwards. But let’s not get ahead of ourselves. Let’s start off with its arrival. It arrived in a much bigger box than we were expecting. But fear not, Lynx isn’t huge. However, every part has its own box. A little like Russian nesting dolls. four boxes emerged from within the bigger box containing the slider, slider motor, controler and lastly, pan and tilt motors. Opening the slider first and expecting many parts to roll out, we found it was just the slider, a storage bag and a few mounting parts. The next box we opened was the slider motor, and the pattern continues  with  very little to assemble. Needless to say, although the boxes were many, the parts were few.

Within minutes, we had it completely assembled and ready to use. Throughout the testing of Lynx, we shot on a Sony a7, Panasonic Lumix GH5, Canon 5D Mark IV and the largest camera we shot with, the C300 Mark II. We started off testing by going through the menus on the control unit. There are six buttons in total, four of which are navigation buttons, one button for select and one to return to menu. Within the menu, depending on the type of shooting you’re looking to do, there are presets for the more tricky shots like time-lapse of stars or a sunset as well as presets for shooting video, like one for an interview.

The next set of controls are for programed moves. Set up your in and out point, even adding keyframes in between, and then choose the duration. You can make a programed moved for video, time-lapse or animation. We found it easy to program, but once we moved to the app control, it was far easier. With the app you can control the Lynx through a better interface than with the controller by itself. Connected via bluetooth, the app will even allow you to control it with your device’s accelerometers. Over time you will need to get a feel for it, as initially it’s a bit awkward. The last control is manual control. This gives speed and movement control to the controller. We preferred to set up the shot and let it do the move rather than try to wing it. The shot turns out better with a plan.

Absolutely the time-lapse control of Lynx is stellar. Using the app or the controller, setup was fast.

While testing the motorized slide, pan and tilt during a time lapse shot, we ran into a flaw. The slider motors will allow you to power in to the end of the slider. In other powered sliders we have seen the option to calibrate for length, so that it will stop before it gets to the end. The flaw overtime will add to the wear and tear of the product that would be best to avoid. Continuing testing time-lapse, we set the slider to go vertical. Controlling the Sony a7, Lynx did a great job. We had it set up to take a shot, move then take another shot. Absolutely the time-lapse control of Lynx is stellar. Using the app or the controller, setup was fast.

Moving on to using Lynx for video motion, we created a 360-degree pan with a 90-degree tilt and a full slide across the full span of the slider. Although the shot we set up was very confusing, the motion was smooth as butter. We then set the GH5 to shoot some more conventional shots you would use for product shots or an interview setup. The move was smooth and looked great. When it comes to using Lynx with a mirrorless camera, the performance is flawless. Keeping a keen ear on the amount of sound coming from Lynx, we wouldn't hesitate to use it shooting video. The motors are very quiet. The motors change pitch when slowing or speeding up, but it’s not loud enough to worry about unless you’re going to use the on-camera mic. 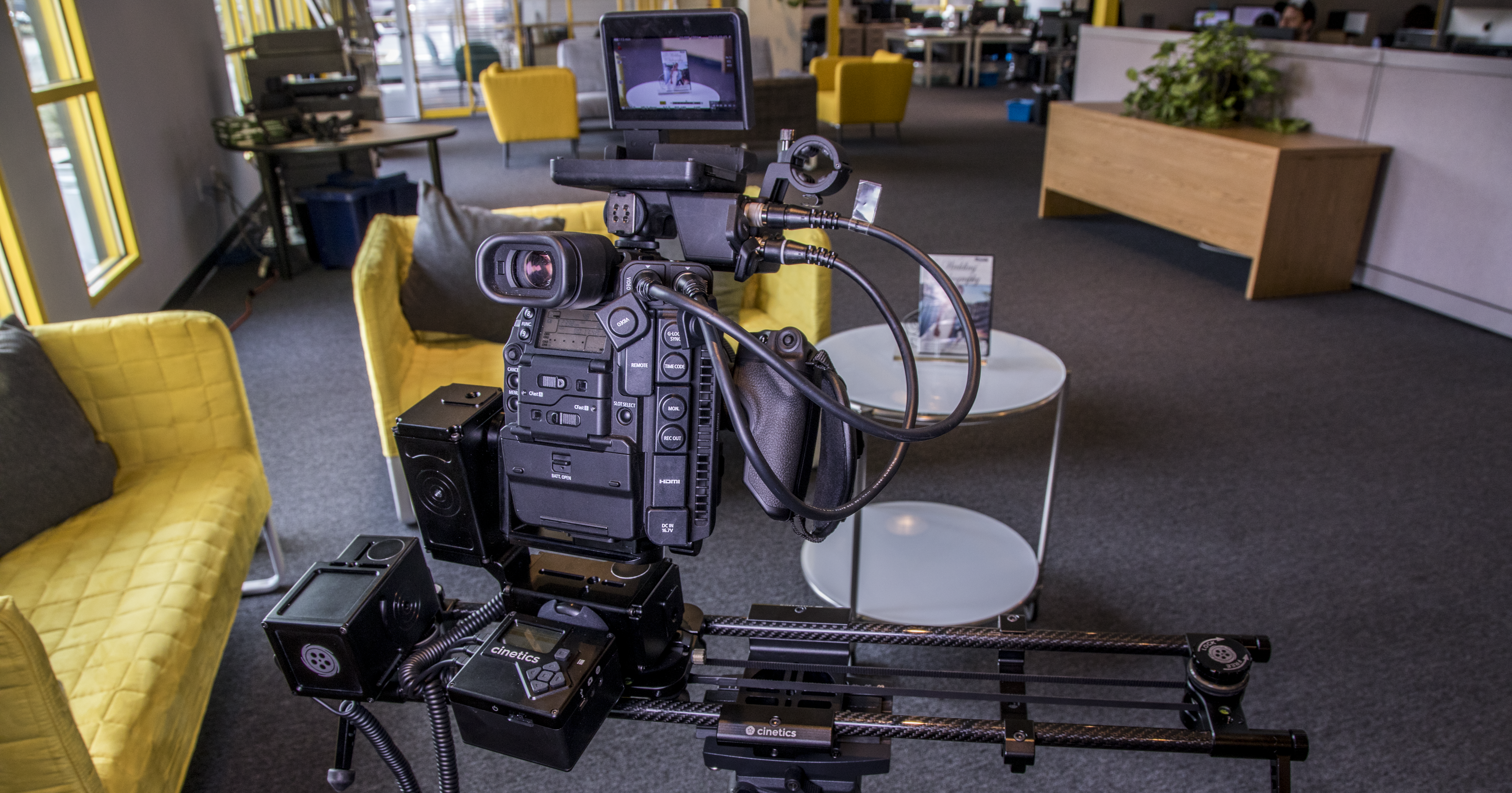 At no time during our assessment did any of the motors seem like they were struggling to execute a move. Even when we attached the Canon C300 MKII, a camera that is above recommended weight, the motors pan, tilted and slid with ease. What we did experience with both the C300 and the 5D is a wiggle at faster speeds. The cause for this is the center of gravity for each camera is far above the fulcrum point. These small vibrations could be seen in the video of the 5D and C300. Once in post-production, using Adobe Premiere Pro CC 17 we added warp stabilizer to steady the vibrations. None of the shaking was too much to correct and looked perfect after post stabilization. The only issue we did experience multiple times with the motors is that they are easily disconnected and should be checked often. The problem is easy to identify and easy to correct.

There are many motorized 3-axis sliders on the market, but let's focus on two that have similar function as the Lynx: the Kessler Second Shooter with the Pocket dolly and Syrp Genie 3-Axis Kit.

The Kessler Second Shooter with Pocket Dolly are a great combo. Unlike the Lynx, the second shooter set-up is not battery powered and is a beast to set up. It has many different configurations, so some the benefit will be in its flexibility. At $1,580 the Second Shooter kit doesn't come with a slider, so add in $500 for the Pocket Dolly slider for a total cost of $2,080. Thats $580 more when compared to the Lynx Kickstarter price, but only $80 once it hits the full retail MSRP.

Next let’s look at the Syrp Genie 3-Axis Kit — it’s just $1,694. The Syrp combines a few of their products to make up this kit, which combines two Genie mini’s and a full size Genie along with their floor slider. Far more mobile than the Kessler, the Genie 3-Axis kit is only controllable via their app and bluetooth. We do attest to the simplicity and easy use that the Syrp Genie App offers, however it requires the use of a phone, and one might not be available. With the Kickstarter savings, the Lynx is $194 cheaper than the Genie kit, but post sale Syrp’s offering is more affordable by $306.

We enjoyed using the Cinetics Lynx. It shoots beautiful timelapse and is easy to set up. If you have a heavier camera, you will need post-production stabilization to get pleasing results. We would have liked to have it know where the end of the slider is, but that is a minor issue. With the kickstarter price, Lynx is a bargain, but once it goes to its retail price, your needs for portability and flexibility will need to be assessed. We like the Cinetics Lynx and would recommend it.

Chris Monlux is a big fan of motorized camera movement. He is also Videomaker’s Multimedia Editor