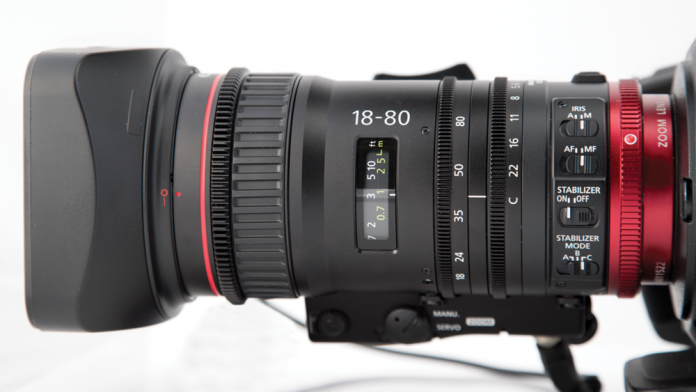 However, many of the lower cost options are nothing more than a photo lens in a cine housing. When you’re talking cine zoom lenses, the marketplace dries up quick. Add in the history of cine zooms being expensive, and we’re talking about an even smaller group of brands in the marketplace. Going further, add in servo control and it should seem fair that the cost is going to be sky high. That’s why this lens caught our eye. Canon shot for the moon with this one by adding function to value with the COMPACT-SERVO 18-80.

The Canon COMPACT-SERVO 18-80 T4.4 EF lens is parfocal. That means, it will hold its focus through the zoom of the lens. The zoom is servo controlled and has three stages of image stabilization. It’s relatively lightweight at only 2.65 pounds and offers auto focus support on the Canon cinema line cameras. At a cost of $5,225 it’s compatible with servo lens controllers. The lens uses the Canon EF mount and has an optional control grip for an extra $475.

Our introduction to the COMPACT-SERVO 18-80mm was at NAB 2016 when we got the exclusive opportunity to shoot with one of three prototypes out on the Vegas strip. Equipped with a C100 Mark II and C300 Mark II, we had an adventure. It was around midnight and we shot a good amount of footage on the strip. It was hardly a thorough review, so our conclusions were simple at best. Starting out on the C300, the size of the lens worked well with the size of the C300 body. The optional grip was attached while we shot — it’s a pity that’s not included in the price. With the grip off, the lens is a bit more awkward. More on that later. On top of the ergonomics benefit, the grip also offers touch-sensitive zoom control. The zoom control on the lens alone can have the speed set, but is not pressure sensitive. This lens isn’t overly heavy, and in combination with the C300, it had nice balance.

A more likely home for the COMPACT-SERVO is on the C100 Mark II. The combination is nice for a run and gun set up. The throw of the lens is nice, and the aperture is acceptable for most shooting situations. Because the monitor is on the back of the C100, we found that the grip was not as welcome. Holding the lens by the bottom where the zoom control is felt more natural. Outside of the ergonomics, we didn’t make any huge conclusions after our first encounter.

Fast forward to when the production model arrived at our door. We were super excited, because Canon was sending a C300 Mark II to test it with. There was no physical difference between what we used that night in Vegas and the production unit that arrived. The lens was brand new. We even got to remove the factory stickers — too fun. It comes with a hood, though we found this to be redundant. Through our testing, we observed that because of the lens’ coating, even getting an intentional lens flare was somewhat difficult.

Unlike our first use with the camera, we now have enough time to put it through our checklist of tests. Being a cine lens, we wanted to know what high-end performance features it offered.

We noticed that the lens suffered only modest focus breathing. We experienced the most breathing at 80mm and none at 24mm. At its fastest, it will zoom through the full 18-80mm throw in 2 seconds. At its slowest zoom, the same distance can take 80 seconds. We did like the pressure-sensitive zoom control the grip offers, but this isn’t completely necessary. Depending on how much control you have over your shooting situation, changing zoom speed might not be needed. The zoom is also super smooth. If you are used to photo zoom lenses, you’ll be happy that this lens is parfocal. Being able to zoom in, set your focus and zoom back out is super handy, especially in uncontrolled shoots.

Being able to zoom in, set your focus and zoom back out is super handy, especially in uncontrolled shoots.

One problem we see with the lens, is that the zoom does make a small amount of sound when operating. Using this lens for an interview could be an issue if you are using a camera mounted mic or if you are close to your subject. However, in most situations, it won’t even be noticed.

The focus control feels nice. It’s not touchy because it has 180 degrees of rotation, but it lacks a key cine feature — hard focus stops. Because of this, it seems unlikely to be the lens you’d choose if you have a second person running your focus.

The overall picture is sharp and offers nice bokeh. It has a constant T4.4 maximum aperture over its focal length. We would have liked to see T2 or better, but that would likely increase the price and the weight of the lens significantly. It has Image stabilization, typically not found on cine lenses, with three stages of stabilization: A, B and C with A having the least stabilization and C having the most. For run and gun shooters, you’ll love this feature.

We tested the lens on the Canon C300 Mark II, 5D Mark IV, 7D  Mark II and 1D X Mark II. On the 5D and 7D the lens worked fine with the exception of the autofocus, which did not work on those cameras. When mounted to the DSLRs, the ergonomics are a bit strange, but the image quality was very nice. When mounted on the 1DX Mark II, the image had significant vignetting because it didn’t bring in enough light for the whole lens. The lens will cover a sensor size up to Super 35. The 1DX Mark II is just slightly larger when shooting 4K.

If Canon were just offering this as a cine zoom, it would still be a good value. Since it’s servo controlled, this lens offers out of this world value. We’re glad it’s parfocal and although we would have liked the optional grip to be included, it’s not necessary for most users. Having image stabilization adds to its run and gun capabilities. We enjoyed using the lens and the image it offered was wonderful.

Although offered at a price of $5,225, the COMPACT-SERVO 18-80 lens is surprisingly affordable for what it does. The image quality is nice and it have a good overall function and feel. The zoom does make noise, but shouldn’t be an issue for most.

Chris Monlux has restored three classic cars with his Dad. He is also Videomaker’s Multimedia Editor.