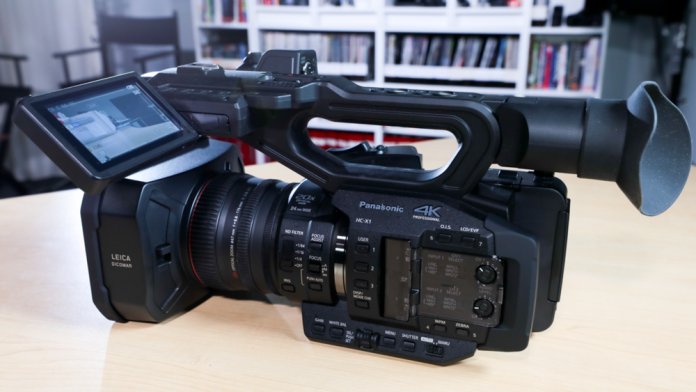 Those that depend on the traditional camcorder format haven’t seen huge advances year after year, but with the HC-X1, Panasonic has taken all of the strengths from the flashier DVX200 and simply left off the more high-end options.

Before we jump into the review, we wanted to touch on a few thoughts on the form factor of the HC-X1. It’s a camcorder. If you are used to the capabilities of an interchangeable-lens camera, then a camcorder might not offer the depth of field possibilities you want or require.

However, having the functionality of a camcorder can be refreshing — or even downright necessary for some. After all, who doesn’t like having buttons and knobs instead of scroll wheels and menu execution? The camcorder has a tried and true form factor that has worked well for a long time.

The HC-X1 doesn’t have a huge sensor, but it’s not tiny either. Its one-inch MOS sensor is very typical for a camcorder. It’s also a very common size for fixed-lens cameras in general. Looking outside of the HC-X1’s form factor, there are the Sony RX10 III and the Canon XC10 that also share the same sensor size along with many other cameras. After the 1/3-inch sensors of the CCD era, 1-inch sensors have fallen into the same status as a standard that three 1/3-inch CCD chips once held.

If you’re considering this camera, make sure you have either SDHC or SDXC memory cards.

Size aside, the picture and color reproduction is very nice. Shooting up to DCI 4K as well as UHD 4K at up to 60p, the camera records to dual SD card slots in MP4, MOV and AVCHD formats. If you’re considering this camera, make sure you have either SDHC or SDXC memory cards. One of the stand-out features in the HC-X1 is that it lacks expensive SDI outputs. If you need SDI, this camera isn’t for you, but if you don’t, it’s an affordable option.

We took the HC-X1 out with the idea that the best fit for this camera would be in news gathering. We wanted to see, if a news reporter took out this camera out, how their B-roll would look. How would their A-roll look? How easy is this camera to use if you have little time to consider where the buttons are? How does it function if you’re without everything except the luxury of capturing exactly what is in front of you?

The button layout is as typical as it gets, but it doesn’t lack anything. Turning on zebras is a quick button, setting and changing the white balance is simple, and if you are recording audio, you can have the same input come in to two different channels to give the option of two different gain amounts for when you just don’t know what you’re going to get from your sound source. There are seven assignable user buttons that are easy to access and simple to assign.

There are also multiple mount points for accessories like an external monitor or light. Connect to the cold shoe mount, 1/4-20 and 3/8-16 standard mounting points. There are two separate 1/4-20 and 3/8-16 threads on the handle. Although cold shoe mounts are handy, they are anything but 100 percent secure. We mounted a Rotolight NEO onto the cold shoe, and it worked fine. However, most things that have any weight to them should be mounted via the thread points rather than the cold shoe. One slip off a cold shoe mount, and depending on what was connected, you could have very expensive mistake to deal with.

Buying affordable media should be easier than with prior Panasonic camcorders. It might even be possible that you already own an acceptable SD card to shoot on.

The viewfinder is easy to use and can be adjusted for right or left eyed shooters. The monitor tucks away for easier storage. It’s easily operated and is bright enough for most shooting situations. We must note that, although the monitor looks just like the one on the DVX200, it has far fewer dots by about a million. This will affect detail because they both offer the same resolution.

The external control of this camera shouldn’t present any struggle to the user. If you have used a professional camcorder before, the consistency of the button layout should make this camera feel very familiar.

The large zoom range on the HC-X1 is a big bonus. The last Panasonic camera we reviewed was the DVX200, and the HC-X1 has double the optical zoom of that camera. For a shooter on the move, the long 24-480mm equivalent optical zoom reaches far while still offering a wide shot without having to move locations.

Overall, if anyone would reap the most benefits from the ease of use of this camera, it would be a field news gatherer or a documentary shooter.

We put the HC-X1 though our typical tests, starting with our low-light test, or noise level test, where we learn at what point noise will be introduced and at what point there is more noise than could be fixed with noise reduction software. We then move on to talking about its rolling shutter. Rolling shutter is an issue if you plan to shoot fast moving objects. We then move on to discover whether the HC-X1 suffers from moire, and if it does, why that should or shouldn’t make you pause. Closely related to moire, we’ll give you the results from our sharpness test and lastly we’ll talk about its dynamic range capabilities so you’ll know if the subjects and locations you shoot are suited to its performance.

When doing our low-light test, we test fixed-lens cameras a bit differently from interchangeable-lens cameras. The reason is that control of exposure is done differently, therefore changing our process. Our results should still tell you the same information regardless of what kind of camera you’re looking for.

We took the HC-X1 into our studio and shot our DSC Labs color chart and increased the gain by 3dB till noise was introduced, starting at 0dB. We didn’t get too far; from the start there is noise, but it’s not a problem till 6-9dB, and with Red Giant Denoiser, we were able to get up to 18dB before the final product was too soft for professional delivery. Small sensors aren’t known for being sensitive, and the HC-X1 isn’t a great fit for low-light shooting.
Next, we move on to rolling shutter. The camera does not have a global shutter, so it’s expected to suffer from some rolling shutter — and it does. We put it on a Sachtler FSB 10 tripod, and with very little drag, we started slow and ramped up to a fast pan. Depending on the frame rate you are shooting, this camera can handle some fast movement. If you’re shooting in 24p or even 30p, the framerate will cause more problems.

For our next two tests, we used our DSC Labs resolution chart. It has very fine lines that get closer and closer together. These show off both sharpness and moire very well. The HC-X1 has a sharp picture, but not so sharp that it suffers from any significant morie.

Lastly, let’s talk about its dynamic range. Just like with the sensitivity issues it has with low light, it isn’t a dynamic range monster. It requires a shooter to settle for an exposure. In a dynamically lit scene, you’ll need to make compromises on what is in correct exposure.

Because it’s a camcorder, the HC-X1 records longer than the typical 30 minute limit found on most DLSR and mirrorless cameras. It has XLR inputs and external controls. These are all strengths against non-cinema interchangeable-lens cameras. Focus can be easily achieved, and overall, the HC-X1 boasts a very usable form factor. If you’re looking to achieve a more cinematic look, however, the HC-X1 just doesn’t do the job. Although totally capable of capturing a narrative story, the cinematic look that a large-sensor interchangeable-lens camera offers easily out performs this camera.

On the other hand, if you’re on the go and need to quickly shoot and capture the moment, then this camera is a great option. If you don’t plan on having the best control over your shooting situation, the perceived weaknesses of this camera will become assets. Easy focus, simple exposure and easy function all equal a better product if the video look will work for you.

When the HC-X1 arrived, we noticed a striking resemblance to the DVX200 minus the retro red with carbon fiber paint job. They aren’t too different, but there are a few distinctions. Starting with the sensor, 1 inch is smaller than micro 4/3 and the footage shows it. However because of that, the optical zoom is double that of the DVX200. Since the HC-X1 only offers HDMI output, it wouldn’t work where SDI is needed, but this puts the camera at a better price point. HDMI only also will make accessories more affordable.

The bitrate for the HC-X1 is up to 100 megabits per second whereas the DVX200 is 150 megabits per second. That might not sound like a lot, and it might not even be an issue if you don’t intend to shoot with this camera from a moving car or in some other fast moving situation. The lower bitrate could be a benefit, too, because it creates less data for the same amount of footage, leaving you with less demand on storage. One place the HC-X1 trumps the DVX200 is that it can shoot DCI 4K instead of only the 200-line-smaller UHD 4K. DCI 4K would best fit a documentary shooter but could be an option that a news gather has little use for.

We believe, because of the larger sensor, higher bit rate and SDI output, the $500 more that the DVX200 costs is merited, but if you don’t need or want those options, you just saved $500 with the HC-X1. The current street price of the DVX200 is $3,700 and the HC-X1 is priced at $3,200. The DVX200 is a special camera, and because of that, it might be for a more focused group of owners. The HC-X1 looks to be a better deal for some. Although it lacks the ability to get shallow depth of field easily, the Panasonic HC-X1 shoots great looking video. We like the price and the value it offers when compared to its sibling Panasonic camcorders.

The Panasoni HC-X1 offers many standard options that make it a camera that will stay relevant for a long time. It was easy to use and will find a home at news stations around the globe. It’s also a viable option for documentarians. 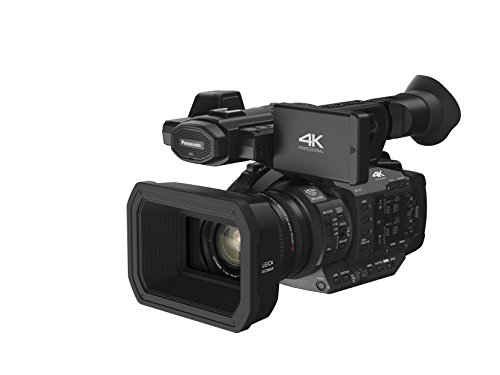