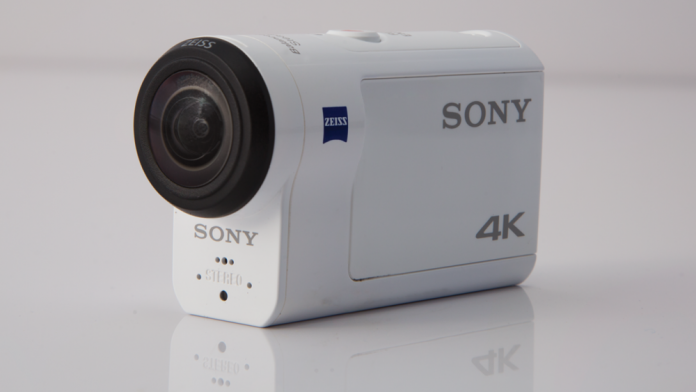 The two are very similar on paper and are direct competitors to each other. In this review, we’ll be covering how the FDR-X3000R performs and how it compares to the HERO5 Black.

We’ve had a lot of experience with the predecessor of the X3000R, the FDR-X1000V. Just like with the HERO5 Black, the X3000R keeps most of the same specs as its predecessor. There are no new frame rate options or bitrates, but both now have image stabilization and tout new optics.

We took the X3000R with us to Las Vegas, shooting on the strip. We designed a mount that would hold both the GoPro and Sony so that we could test them side by side at the same time. Many of the tests in this review were done on the fly during this trip. For more controlled tests, we used the studio here at Videomaker World Headquarters.

We put the X3000R though a slurry of tests to evaluate sharpness, bitrate, image stabilization, low-light capabilities, color settings, dynamic range, rolling shutter and shooting underwater. Then, we tested its audio recording abilities starting with how it sounds with and without its underwater housing. We also tested how it sounds with wind reduction on and off. We then moved on to testing its photo options, covering both time lapse and photo bursts. Lastly, we’ll show you our usability tests, including field of view options, battery life, housing and menu operation.

We started our studio testing by shooting our DSC Labs SineZone 4K v2 chart to test its sharpness. The chart offers up smaller and smaller gaps between lines, before the contrast between the lines becomes too fine for a camera to see. The Sony performed well, providing a nice sharp image. When compared to the GoPro, the Sony is much sharper.

With action cameras, the camera’s bitrate will affect how a moving background looks when passing quickly. Let's take snowboarding as an example: The higher the bitrate, the better the surrounding trees will look when zooming down the hill.

Because it's an Optical Image stabilization, it doesn't use its resolution to scale, rotate and crop and can therefore be used at every resolution.

The Sony and GoPro now both offer image stabilization. However, the type of IS they provide is different. The HERO5 Black has digital image stabilization, which means it achieves stabilization through rotation, scale and cropping. This is no different than if you stabilize your footage with your editing software in post. On top of that,  because it uses scale to achieve the stabilization, there is no IS offered when shooting in 4K on the GoPro. Sony is a different story; the image stabilization it offers is optical and works through attaching the sensor to the optics. Because it's an Optical Image stabilization, it doesn't use its resolution to scale, rotate and crop and can therefore be used at every resolution. This is a stand-out feature.

For testing low light performance, we had to test a bit differently than we typically do. In our normal low light test, we raise the ISO and adjust the aperture and shutter speed to keep the same exposure. Doing this shows at what point noise appears in the image. This in turn informs you of at what ISO can you push the camera in low light situations before noise is introduced. But the FDR-X3000R doesn't have enough manual control to test it this way. To get around this, we set it for auto exposure and dimmed the light source. Using the GoPro as a baseline, again, Sony bettered GoPro. The X3000R was able to handle 10% less light before noise was introduced.

When it comes to color, Sony offers only two options: natural and vivid. Natural will require some grading whereas vivid will not. The color is nice with the Sony, and it does a good job reproducing color overall. However, we should note that we feel that the HERO5 has better color than the Sony.

Action cameras in general are not known for having a huge amount of dynamic range, and the Sony is no different. If you are in full sun and have mid-day shadows, it's likely that depending on what you're exposing for, you will either have a blown out sky or no information in your shadows. Between Sony and GoPro, the HERO5 had better dynamic range, but only slightly better.

If you plan on shooting any fast action with an action cam, rolling shutters should be on your radar. The FDR-X3000R suffers from a significant rolling shutter. Expect to have an issue with it if you shoot from fast moving objects. The GoPro wasn't much better, it’s not a matter of being bad because both are bad — but the Sony is a bit worse.

With the FDR-X1000V shooting underwater and getting a good image required buying a different camera door for the housing. With the X3000R, the housing lens door is flat, allowing users to get better video. This was a huge improvement over the last Sony action cam. However, GoPro did it better and took it a bit further, now not needing a underwater housing at all. The GoPro’s underwater footage also looked a bit sharper than Sony’s.

Over multiple tests, the Sony had an average battery life of one hour and ten minutes while shooting 4K at 24 frames per second. For the size of the battery, that's pretty good. However, if you compare that to the HERO5 Black, the Sony has a 23 percent less battery life. At 20 dollars each, the batteries are cheap, so we’d recommend buying a few at the time of purchase. Having multiple batteries is a must.

The menu operation on the FDR-X3000R has been greatly improved since the FDR-X1000V. You access everything via icons and all options are no deeper than two menu options. It can be accessed from the camera by itself but can also be controlled via the Live Remote. The Live Remote made all shooting functions, including menu control easier.

The main player that Sony is going up against is GoPro. The HERO5 Black and the FDR-X3000R are the same price at 400 dollars. However, if you want to view what you are shooting as you shoot it with the Sony, you will need the Live Remote — an extra 100 dollars. The HERO5 Black has a built in touchscreen, making it a better value.

Sony made some big improvements with the X3000R. When it comes to sharpness, bitrate, low light performance and image stabilization, it’s a better camera than GoPro. However, if all other action camera options are considered — like underwater performance, menu, housing, rolling shutter, color and field of view options — the HERO5 Black is a better option. With that said, the Sony FDR-X3000R a great camera that would be a good choice for most.

The Sony FDR-X3000R is a powerful camera in a small form factor. It shoots 4K, has wind reduction and offers optical image stabilization. We would recommend it.