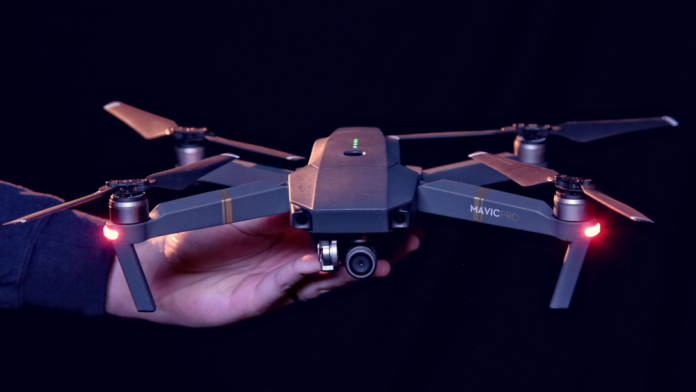 We wonder how much each brand knew about each other's products prior to launch — it seems they must have known a lot. Mavic Pro is $999, while Karma is $799 but doesn't come with a camera. With a HERO5 Session Karma is $999 and with a HERO5 Black, $1099. The stand-out differences between the two boil down to this: Karma has a detachable grip so the gimbal and camera can be used on the ground and Mavic is around half the size of Karma and is equipped with a built-in camera.

Mavic looks to be around half the size of Karma, although we don't have them both in our hands for comparison — yet. When collapsed, Mavic is much smaller than the Phantom 4. However, when the rotors are out and fully extended, tip to tip, the Phantom 4 and Mavic Pro are almost the same width. Because of the forward facing camera and smaller landing gear, the Mavic is only about a fourth as tall as the Phantom 4.

Because it’s smaller, we wanted to know if that would translate to a lighter build compared to past DJI products. They built it tough. The underbelly is metal and gets hot after flight. It appears to be a heat sync. The rotors fold out, but the front and the back stow away differently. The rear flips out like frog legs, while the front rotates out from the side. The way the rotors feel when collapsed or expanded feels durable. Although we do see them wearing out eventually since they move vs being stationary like the Phantom 4, it doesn't feel like that would happen quickly.

Next, we inspected the controller. Your monitor, aka your phone, is underslung to the controller. This makes it much easier to move around. Just like the drone itself, its small size doesn't mean it's light weight. It looks and feels tough. The way your phone attaches is handy, however we found that bigger phones like the iPhone 6 Plus we tested it with are a bit too large for great fit. The slightly smaller iPhone 6 fits like a glove. A cable plugs into the bottom of your phone to connect it to the controller. This is also where you charge the controller. The cable isn't the most elegant design feature, when plugging in, so keep care to make sure there is full contact.

We were excited to get a Mavic Pro before they were shipping — so much so, that when a little box arrived, we felt we wanted to share the excitement with you on Facebook Live. “Wow, this thing is tiny” was our first thought. Both Mavic and its controller could easily be stored in a small backpack. After unboxing we learned that the gimbal garde or bubble could be removed. Once the broadcast was completed, we quickly got to flying.

It was windy outside for the first flight: 15 mph with gusts up to 22 mph. At times, the wind was too much and Mavic gave us a warning. Because we wanted to see what it could do, we pushed past the warning. Given the wind, it flew great! We did find when we had a strong headwind that we needed to descend to be able to move forward at all. It was very windy and our forward flight speed wasn't enough to compete.

Because we wanted to see what it could do, we pushed past the warning. Given the wind, it flew great!

The battery life was great. Over six flights where we were monitoring battery life, we experienced a range of 23-26 minute flights, depending on how aggressive the flight was. We were impressed by how quick the battery charged also; we were ready to fly again in one hour. Because the batteries are only $89, we would recommend investing in three or four batteries. Charge while you fly and you will be able to keep Mavic in the air most of the day.

There were only a few problems that we experienced during our tests. The first is that the gimbal had found its way out of its keep and caused us to have some major vibration in our first flights video. Once we identified the problem, it has not returned and no other vibration was experienced. The second issue was the focus. It's important to tap on your point of interest to verify that the video is in focus. The third was that the gimbal wasn't always parallel with the horizon. Every time it was observed, we reset the gimbal. This fixed the problem, but it was something we experienced at least once a flight. Our recommendation is that you do this before you fly, every time. Lastly, we had to re-calibrate the GPS every other flight. Before the Phantom 4, it was normal to calibrate the GPS every flight, so isn’t a big problem, but it would be nice to not have to do it all the time — it will make you dizzy.

We also tested the Intelligent Flight modes. They were all pretty easy to set up and worked as they should. Because you use the DJI go app, if you have flown a DJI drone before, the experience feels interchangeable. Follow Me mode worked great. Waypoints functioned just as they do with the Phantom 4. However, we would like it to be updated so you could loop your flight or have it reverse and do the route backwards.

How does the video look?

Mavic shoots DCI 4K in 24p and in UHD 4K 24 and 30p. The bitrate is 60 Mbps and the Mavic uses the H.264 codec in a MOV container. When pixel peeping, the video looks a bit softer than the Phantom 4’s video. Compared with the GoPro HERO5 Black that would fly on GoPro’s Karma, the wide angle lens of when shooting in UHD 4K with the GoPro is significant and doesn't look as good as the Mavic’s camera.

Mavic is $999. GoPro Karma is $799-$1,099 depending on configuration. Mavic is smaller, but Karma has a detachable gimbal and camera and comes with a grip to operate on the ground. Mavic flew great and operates just like the Phantom 4. GoPro feels more beginner friendly, but because of this, it might be too simple for a pro to get everything they’d like out of it. When shooting 4K, the Karma shoots with a large amount of distortion whereas Mavic does not show any major distortion.

Mavic looks to be a good buy. DJI is known for making great drones, and they did some good work when they made this little guy. It’s small enough for you to just bring along in case you wanted to fly, and its price is very competitive in the marketplace. It’s not without its flaws. How often the gimbal and GPS need to be recalibrated is a bummer. If you keep an eye on it, the gimbal won't cause any vibration problems. The biggest flaw is how easy it is to get blurry footage if you aren’t vigilant about the focus. With all of those issues in mind, the Mavic is still a great product with a good price. We would recommend the DJI Mavic Pro.

The DJI Mavic Pro is great if you need a highly portable drone with solid image quality at a reasonable price. Though not without flaws, Mavic presents a good value.

Chris Monlux is a big nerd. Every time a new product comes in to Videomaker, it’s like christmas to him with less wrapping paper. He is also Videomaker’s Multimedia Editor.