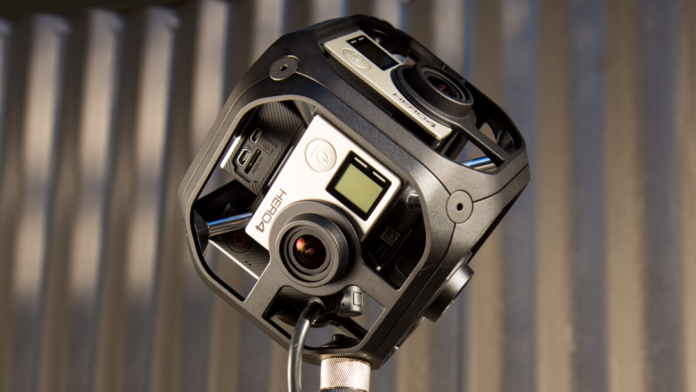 Omni is more than just one camera, it’s more than six cameras. It’s not just a rig, it also includes the stitching software. GoPro made a turnkey, multi-camera, spherical setup that gets some very surprising results.

We had been talking to GoPro about getting a review unit of Omni since we saw it and gave it a Best of NAB award at NAB 2016. During that process, the opportunity to produce a how-to video on spherical video came to us. A computer company was looking for a video to showcase the new computing power of their newest tower series. The editorial team did not produce the video, but did offer some support to those that did. The production of that video began with renting 10 GoPro HERO4 Blacks and using a 360RIZE Pro10 v2 360° rig. The rig is hard, blue plastic and locks in each camera. It arrived with a dog clicker to assist in slating each take, as stitching requires an audio sync.

During pre-production of that spherical video, we experienced a few problems. The first was that every individual camera’s settings had to be changed to get them all shooting the same video. This was very tedious and left a lot of room for human error. The second was that for any rental house, GoPros are definitely going to be the most abused cameras they offer. This means you probably will receive at least one that doesn’t work right when renting ten at a time. And for us, having just one extra wasn’t enough. On shoot day, the crew experienced more difficulties than could be overcome, with multiple errors on multiple cameras after only one of 10 planned shots. All production stopped and the shoot that day was scrapped due to equipment failure.

Little did we know, but the Omni review unit was on its way. The very next morning, the solution to the production problems had arrived. This is when a very complex shooting situation became simple. Omni worked every time without fail. All of the camera settings are slaved to one unit and, when you start recording, they all start synchronized. Another huge benefit of Omni over the other rig is that using the internal batteries for the HERO4 Blacks is optional. You can also use the included Cine-battery, giving much more production shoot time.The contrast between dealing with 10 different cameras and working with the Omni was drastic. Getting all six cameras to record every time with the same settings was a snap with the Omni, not to mention syncing them in post, but more on that later.

We did multiple tests to make sure we were experts on the Omni, as well as to remedy any problems prior to the re-shoot. The second shot only lasted a few hours — the Omni made it almost too easy. The contrast between the two experiences cannot be overstated. Every time we needed Omni to record, it did just that. It seems like a simple request for a product to work every time you use it, but multi-camera spherical video arrays are simple in concept only — until now.

Omni is a complete system that just about anyone could operate.

When we moved into post-production mode, there were even more benefits offered by Omni. When producing a multi-camera spherical video, even prior to stitching them, you must get the data off the cameras and into your computer. Omni comes with a USB hub and USB to micro SD card converters to easily plug in all of the cards at once. Worried about what card was in what camera? Omni formatted the cards and labeled the files with the camera in the file name. Combine that with the Kolor Software Bundle that includes Omni importer, Autopano Video Pro + and Autopano Giga, and the Omni system makes a complex thing like stitching simple — it could be done by anyone.

When we were stitching footage from the 10-camera 360RIZE rig, we used the same software that comes with the Omni (Autopano Video Pro + and Autopano Giga). They are very straightforward programs that make stitching and video manipulation possible. When used with the Omni, they worked like a charm. Sync was easy, and the majority of the stitching was great. With the other rig, the sync wasn’t always easy to achieve and the stitch always needed to be adjusted.

Lastly, the Switchtronix battery, battery mount and clamp made running the Omni for long periods of time possible. The 360RIZE rig just ran off the internal batteries of the HERO4 Black’s, and you could only expect an hour to an hour and a half versus over three hours with the Omni power source.

Street price for six GoPro HERO4 Blacks is $450 each or $2,700 dollars total. GoPro sells the Omni rig by itself for $1,500. Add in the battery for around $320 and the software for around $1,000 and you’d pay $5520 — and that’s not including the cost of the case, battery brackets or any of the other accessories. At $5000 for the complete Omni package, GoPro is giving you a pretty good value.

Next, let’s look at the Freedom360 F360. It has the same configuration as the Omni, costs $675 and requires six GoPros. Those GoPros would cost $2,700 giving a total of $3,350. With the $1,600 difference between it and the Omni, it could be a cheaper option. Add in the same stitching bundle the Omni comes with, and it ups the price to $4,350. Overall, we feel that the money savings will not equal the value of the ease of use that the Omni offers.

Omni is a complete system that just about anyone could operate to produce a successful and good looking spherical video. The price tag of $5000 seems expensive, but when you look at what it takes to compete with what the Omni offers, it’s priced right. Even though you can get a cheaper option, the hassle wouldn’t equal the savings. Because of this, we recommend the GoPro Omni to anyone serious about spherical video production.

The GoPro Omni is a full solution to shooting multi-camera spherical video. It’s easy to use and although not cheap, it’s priced right in the market. We would recommend it.

Chris Monlux thinks that spherical video will be huge one day. He is also Videomaker’s Multimedia Editor.