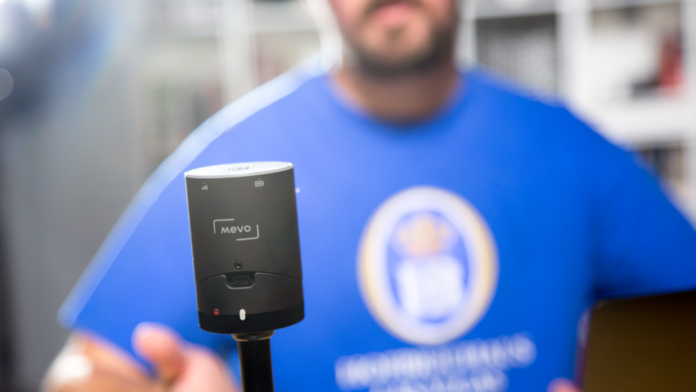 A few months later at NAB 2016,the name had changed to Mevo and they announced that it would be the first Facebook Live camera. This is when Mevo caught our attention. The announcement came just as Videomaker started using Facebook Live.

At the time of the announcement, Facebook Live could only be presented from your phone with the Facebook app. We wanted and needed a higher quality way to present our content to our audience. NAB 2016 allowed us to look and hunt for a proper solution industry wide. Needless to say, we were eager to see what this camera could do.

Mevo is a dedicated live streaming camera that shoots in 4K but streams 720p to allow for cropped shots, digital zooms and pans. Starting out with a 150-degree field of view, overshooting its final output gives the user the ability to punch into a tighter shot. The zoom or punch in won’t result in resolution loss either because the Mevo outputs 720p but captures at up to 4K. This way, the Mevo allows for many configurable shots from just one camera.

By the time the Mevo review unit arrived, Facebook had opened up its API to work with any streaming tool that uses RTMP protocol. That means that Mevo went from the only dedicated Facebook Live camera on the market to merely the first one. During our search we found three other tools that could stream to Facebook Live. The first was any DJI product that used their DJI Go app, the next was Telestream Wirecast 7 and lastly, what we now use regularly, a Newtek Tricaster Mini using RTMP protocol, which gives us the ability to switch between multiple cameras and sources.

Mevo was the simplest tool, and we liked that it could be packed easily when travelling. We took it to task quickly, using it for our next Facebook Live broadcast. At that time, the app didn’t have full functionality. We could use the face tracker but couldn’t save shots.

Our thoughts about it started upon first view. The wide lens requires a subject to be very close to the camera if you want fill the frame and have audio picked up by the on-camera microphone. This is a very unflattering shot. The camera shoots with a 150-degree field of view; that puts around 2.2 meters in the frame.

Because of the native FOV of 12 mm, we found it awkward to set up a two-shot and have it look good. We had to crop in to make it look right. On top of that, the mic was disappointing. Some more directional operation or the ability to plug in an external mic directly into Mevo would be nice. Using an external mic is possible, but it has to be plugged in to your iOS device, not the camera. The mic captured lots of the noise floor from the room, and our voices just didn’t stand out, so hearing the content we presented wasn’t easy.

After our first broadcast, knowing what we just experienced, we used it for only a single wide shot on our next broadcast. A single shot was much easier to use, and we were much happier with the results.

After Livestream released the fully functional Mevo app, we tested it again. Being able to set up shots and choose when to switch to them was nice. It expanded the usability of Mevo greatly. However, we found that we did not setup as many shots as were allowed because we couldn’t find enough ways to break out that many different shots from the native FOV.

The app is easy to use, and the camera is easy to operate. It is a bit cumbersome setting it up with a network depending on what your setup will allow or require.

Much of Mevo’s performance is dictated by the network speed as well as how fast your internet is from your ISP. The network at our office gave us some problems having and keeping a good stream, but we have a very busy network. When tested at home with a more simple network, Mevo worked flawlessly. Because it was so simple and easy at home, we suspect it was our busy office network that made it difficult to keep a good stream going.

Currently Mevo has no direct competition. They are first to market with a unique product. It had more value when it was the only camera to stream to Facebook Live, but it still has no rival in its core functionality. We have used Wirecast 7, but it’s $500 and isn’t a camera, just a software switcher that allows you to stream different inputs to Facebook Live. DJI has a more usable option with Osmo at $650, which allows for more expansion if you wanted an external mic, but this solution is more expensive and doesn’t allow you to switch between multiple angles.

Facebook Live is growing every day, and broadcasting quality video will be key to your success there. Mevo is a step in the right direction and better than using a phone camera. At $400, it feels pricey, but since there isn’t any direct competition, Livestream could get away with just about any price and sell a few. Overall, it’s a good tool.

Mevo was first to market to offer a exclusive camera for Facebook Live. It’s a unique product and would work great for some, and might not be everything it needs to be for others. It’s a good product and does what it is meant for well.

Chris Monlux opens a door and a conversation the same way: assertively. He learned that from his dad. He is also Videomaker’s Multimedia Editor.