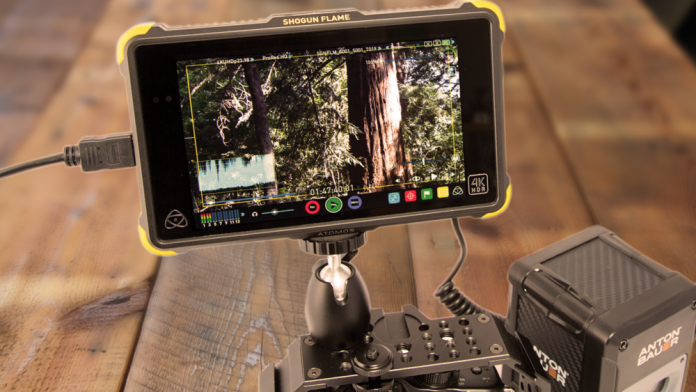 These monitor-recorders will capture 4K or HD ProRes video via an HDMI input or, with the Shogun Inferno and Shogun Flame, through SDI inputs. Plus, they offer a 7.1-inch screen with a 1500 nit brightness.

Built tough, all three new monitors in the Atomos lineup have a much stronger housing than previous models. They are now also equipped with two battery slots for longer operation time. When fully loaded with batteries and media, they weigh between 2.34lbs to 2.5lbs. They all have a max viewable resolution of 1920 x 1200 with 325 PPI. The screens look great, especially when displaying downscaled 4K.

What’s in the box? How do they feel?

Arriving in a bright yellow hard case, both Shogun models tout yellow as their color. The Ninja Flame is just as bold in red. It almost screams “steal me, I have valuable stuff inside!” The color aside, the cases are tough and robust and can easily be brought onto a plane. A strange side note: the interior of the box has a wretched smell, so if you keep it close to you, make sure it’s closed. Also included is a hood and a few other miscellaneous accessories, but be prepared to buy a few SSDs so your production doesn’t need to stop for media offload.


AtomHDR is a great tool for assisting with exposure choice when shooting Log.

AtomHDR is a great tool for assisting with exposure choice when shooting Log. With AtomHDR you can see how much latitude you have. Many times, it's hard to choose the right exposure because of how a Log footage looks when captured. Plus, if you have ever had a client looking over your shoulder who wouldn't understand why everything looks flat and washed out when shooting in Log, you could benefit from having the ability to preview your footage with a 3D LUT applied. You can also use this feature to see what your footage looks like in Rec. 709 while still capturing in Log — useful for seeing how your footage might grade given the situation you're shooting in.

We took out the Shogun Flame with our Canon XC10, Sony a7S II and the Panasonic GH4. All three cameras shoot an 8-bit internal recording, can shoot UHD 4K and the GH4 can output 10-bit. Shooting in our local park, we bounced around from camera to camera, either simultaneously recording internally and with the Shogun Flame in the case of the XC10 and GH4, or doing two separate takes, one into the Atomos and the other being recorded internally for the a7S II. With each camera we shot in their built-in Log profile: V-Log with the GH4, C-Log with the XC10 and lastly S-Log2 and S-Log3 with the a7S II.

There are two big things we noticed during our tests. The first was how much more detail we had in the footage of the GH4 versus what was captured internally. Of all the cameras we paired with the Flame, the GH4 had the best results from the coupling. This is due to the GH4 outputting 10-bit color versus internally capturing 8-bit. We especially noticed the difference in a shot with a tree with small leaves in the background. It had mixed light, some hard, some soft and some in full shade. In the 10-bit recording, there was much more detail and contrast between each lighting condition whereas with the internal recording, the leaves blended together and the nuance to the lighting was not noticeable at all.

Out of the three cameras, we experienced that the XC10 has the hardest Log to expose for. C-log is more difficult to grade, but having AtomHDR allowed us to verify the proper exposure and experience what a simple Rec.709 LUT would look like when applied. The image itself didn't benefit much if at all from the Shogun’s recording features. Because the XC10 both records internal 8-bit and only puts out 8-bit, the benefit from the Shogun Flame was seen only in the shot and exposure assist tools and the larger screen.

We experienced only two negatives with the Shogun Flame. The first is that it gets hot to the touch. Use it for even a little while, and it gets hotter than you’d think was good. However, the heat didn't affect its ability to function and did not cause any issues other than being a little unnerving. The second issue was that if you want to attach the monitor to your hot or cold shoe on your camera, the probability that it will fall off is very high. It's just too heavy to be attached that way. We put a cage on the GH4 and attached the Shogun Flame via ¼”- 20 threads on the bottom of the monitor and on the cage. This allowed us to safely use the monitor in a run and gun configuration. Overall, this isn't an issue of the Shogun Flame but just points out the weakness of connecting anything with weight to a hot or cold shoe of a camera.

Atomos has organized this line to include more options the more money you spend. Starting with the Ninja Flame at $1,300, this is the the lightest monitor and includes the fewest options. Different from the Shogun line, it comes in a red box and will not accept raw input. Let's compare it to the Shogun Flame. The Shogun Flame is $400 more, 1 ounce heavier, adds an SDI input, output and conversion and offers genlock.

The Ninja Flame, Shogun Flame or Shogun Inferno all offer different levels of functionality and your choice in model should be based on the features you’ll need during production. With a spread of $700 from most affordable to most expensive, a potential buyer can make sure to get every option they might need and nothing more.

Let's look at two other products that do what the Shogun Flame does. The first is the Convergent Design Odyssey 7Q+. It costs $1,800, offers a .6’’ larger screen but has a lower resolution. It will also record up to 60p in 4K. The Shogun Inferno might be a more fair comparison and is similarly priced at $2000.

The Shogun Inferno and Flame and the Ninja Flame are reasonably priced. They aren’t the cheapest, but they aren’t too far off from their competitors, and they offer some unique features. AtomHDR is a great exposure tool and being able to preview a 3D LUT feels like a necessity after you have used it for any length of time. We liked its performance, but would have liked it to not get so hot. Overall, we like all three products, and applaud Atomos for offering a range of options at fair prices.

The new line of monitors from Atomos are a good value. The Shogun Flame and Inferno and Ninja Flame offer great shot assists and have bright and nice looking motors.

Chris Monlux is excited to write his bio in each review. However this time, he couldn’t come up with anything clever. He’s also Videomaker’s Multimedia Editor.