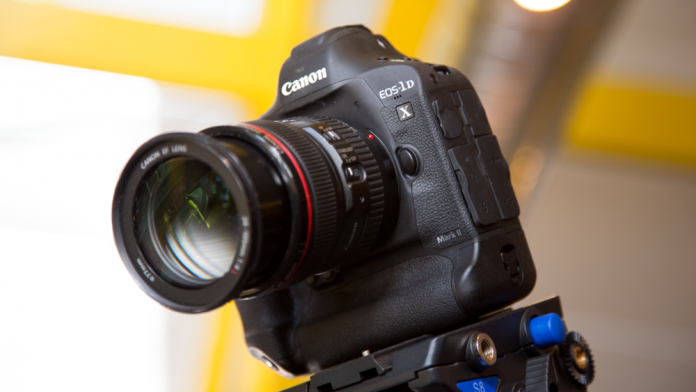 We already mentioned 4K, but there’s a lot more to this camera than that. With up to 60 fps in DCI 4K, the ability to shoot up to 16 continuous photos,  it’s an action shooters dream.

Canon was on top of it when they sent us the review unit, sending it out much quicker than the typical review product. We pulled it out of the box and were excited to use the 1D batteries we already had. Unfortunately, our older batteries are not compatible. That’s ok — the battery lasts a good amount of time, but more on that later.

To give you a little bit of history, here at Videomaker, our go-to camera for a long while was the Canon 5D  Mark III. However, in the past year, we decided to produce all our content in 4K. We have tried a few different cameras, and from time to time, we shoot with the 5D and upscale it 4K. We love the look that much and when presented on YouTube, it looks pretty good. However, we feel kind of deceptive doing this, so we typically upscale only when a Canon camera is needed for a video.

When we produce in 4K, we bounce between the Panasonic GH4 and the Blackmagic Design URSA Mini 4K. The URSA works well when are doing static shots, but most of our support tools aren’t rated for a camera that heavy. In times when it’s not possible to use the URSA, we shoot the GH4. It’s small and does the job, though the small sensor does make getting shallow depth of field more difficult because it’s not always possible to back the camera up as far as we need to.

Here’s where the 1D X mkII fits in as a real solution to our 4K needs with a form factor that is compatible with our production equipment. Although the sensor does have a 1.4x crop when shooting 4K, it’s far better than the 2.3x in the GH4. Because of this, we began to use it for all of our shooting needs. We used the camera to capture lots of our b-roll for our product reviews, our A-roll of our talent and for a bit of leisurely shooting.

The 1D X mark II is an Full-Frame EF camera shooting up to 20.2 effective Megapixel

Before we were able to take it out for a good run-around, we used it for product review A roll and B roll, including for our RED RAVEN review. This was a good opportunity to test how the footage looked when cut with a cinema camera; it held its own. We were really impressed, and so were some of our audience, who commented that the 1DX MKII looked better than the RAVEN. We don’t know if we’d go that far, but it does look great.

During our shooting experience, we noticed that the button layout is a little different than that of the 5D, but with a bit of usage, the muscle memory kicked in. The larger size, although great for photographers, makes it a bit awkward for some video shooting. Depending on the lens, it wanted to fall forward when set down — not a issue if you are aware of it, but it could cause an accidental drop off a table. As well, it has triggers for vertical photos or video, but we aren’t interested in shooting vertical video. The mode dial found on the top left of the 5D isn’t found on the 1D X mk II. Instead, it has a button to switch between modes.

We were really excited to see that it had a touch screen. But alas, our excitement dwindled when we realized it was only for the touch AF. That's not to say it doesn't work great, because it does; it’s very responsive. However, we had a bit of an issue using it because of our large fingers and the small 3.2-inch screen; we didn't always get the tap point we wanted wanted, but somewhere close instead. Depending on the amount of depth of field you’re dealing with, this could make a big or small difference. Overall, it worked great! It’s too bad you can't use the touch screen for changing any of the other controls of the camera.

There are three questions we’re always asked with every camera we review. How is its low light performance? How long does the battery last? And does it overheat?  These questions surely are a result of user experiences with Sony’s Alpha line. Everyday shooters are not always able to shoot in the the perfect lighting situation or have many batteries to use at their fingertips, so the answers to those questions are really important.

There are three questions we’re always asked with every camera we review. How is its low light performance? How long does the battery last? And does it overheat?

With low light, it’s more of a question of at what ISO is noise introduced into the picture and at what point does it get distracting to the viewer. With the 1D X Mark II, we started to see noise at ISO 800, with anything over ISO 3200 needing to be noise reduced. Past ISO 12800, we don't believe you can shoot and expect a professional looking product.

When it comes to battery life, the 1D X Mark II does great. We shot DCI 4K continuously with the screen on for three hours before the battery died. The camera was warm and the Cfast 2.0 card we used was hot, but everything operated as expected.

Although the camera slot says CFast, it really means CFast 2.0 for video shooters. Ether have the ability to off load your footage on site, or pony up the big bucks and get a few CFast 2.0 cards. We used the Lexar 3400x currently retailing for around $365. Need two hours worth of footage? That will set you back $2,190 for the 6 cards you’ll need. Wowzers!

Aside from the storage issues, it's great that the bitrate is so high. That allows for less compression, and the final quality of the video is superb. However, if you’re like us and come from shooting with the GH4, having files that are now eight times larger than you’re used to could be a problem. Luckily, we have lots of storage, so other than it taking a bit longer to unload a card, the high bitrate is a nice luxury to have.

We didn’t experience any overheating shooting indoors at 78°F, but we didn't stop there. Putting it in direct sun in the hot 95°F degree summer sun here in Northern California, it lasted 45 minutes before stopping and giving us a warning. Fewer than 5 minutes inside and it was ready to shoot again. We wouldn't recommend being in direct sun and expecting much shooting time. The body is black and is going to get hot. Bring an umbrella and shade the camera and yourself while you shoot in heat. Most cameras will overheat in a similar amount of time in those conditions.

With moire, there is nothing out of the ordinary. Because its a 1:1 pixel ratio, it shouldn’t suffer from moire. What moire we did see wasn’t a problem at all. The rolling shutter of the 1D C is quite significant: Jello City. So did Canon do better with the 1D X Mark II? Yes, the 1D X is significantly better. You’d expect to have some because it has a rolling shutter, but the effects aren’t bad at all.

To run the camera through its paces, we took a trip to the Lake Tahoe area. Starting in the early morning and catching the early daylight, we started with a stretch of the Truckee River. Large granite boulders littered the landscape in the first place we shot. From the most pleasing angle, the sun reflected off the whitewash of the rapids, creating some very bright areas. In contrast, the shore was dark with hard shadows from nearby pine trees. Getting correct exposure was not possible. If we left the detail in the whitewashed rapids, the shadows in the trees became completely black. Splitting the difference resulted in an OK final image, but showed that the dynamic range wasn't going to win awards. It wasn't anything to baulk at either, though.

The rest of our shooting in Tahoe was simple and easy. The camera looked like a 4K version of the 5D mark III that we are very accustomed to. Over the time we shot with it, we used three different lenses: a Canon 24-105mm L Series, the Canon 50mm f1.2 L Series and the Sigma 24-35mm f2 Art zoom.

We tried out the 60 fps in DCI 4k at a minor league baseball game. 60 fps is just enough to get a cinematic slow-mo when played back in 24p. The really nice feature of the 1D X Mark II is that you can shoot in up to 120 fps in 1080. At that frame rate, when slowed down, things start looking significantly different from the way they do to the human eye. To shoot 120 fps, you enable the camera’s high frame rate mode. When in this mode, the 1D X converts the 120 fps to 29.97, giving instant slowmo review. There is one caveat to 120 fps — audio is not recorded.

Because of the $6,000 price-tag, the 1D X MK II isn't for everyone. However, its frame rate options and nice picture quality gives it enough value for the money. If you do any type of professional photography, you’ll get the best Canon has to offer with the 1D X Mark II.

We really enjoyed using the 1D X MKII. It’s larger size is nice for getting more stable handheld shots, but some might be turned off by its size and weight. The autofocus is great, but we still wouldn't recommend AF over manual focus in most video situations. It shoots beautiful DCI 4K video, and if you love Canon, you’ve been waiting a bit too long for 4K in a DSLR.

It comes with a big price tag, but the picture quality is fantastic. Something to consider is that for about a grand more, you can have a RED RAVEN brain, though you’ll need $3-6,000 worth of accessories for a complete RED camera system. It’s double the cost of a Sony a7S II, but some complain that those mirrorless bodies are too light and small. To boot, they have a short battery life and can have overheating issues. Although it's not a perfect fit for everyone and is high dollar, we definitely recommend the Canon 1D X Mark II.

Canon made a great camera with the 1D X MKII. It’s not cheap, but has great image quality and is exactly what Canon says it is.

Chris Monlux is a big fan of the Ford Mustang. Infact, he owns a 1966 Ford Mustang GT Fastback. He is also Videomaker’s Multimedia Editor.