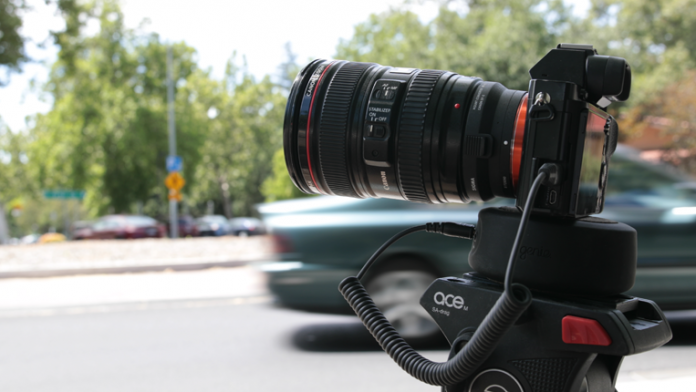 Consider this: You find yourself with only a camera and tripod, and you want to improve your production value, but have very little ability to carry around much more than you already have. What then? Not long ago, you’d have accepted it, and got the best pans and tilts your camera and tripod could offer. But with an assistant like the Syrp Genie Mini, you’re able to step up your game and only adding eight ounces to your rig.

The product is quite simple; It’s a bluetooth controlled time lapse controller that allows for automated panning. It’s controlled by an app, and will control your camera during timelapse control or pan over time shooting video in video shooting mode. It can last a long time too — over a day when in timelapse mode and upwards of five hours shooting video. When your battery is depleted, charging is done using a USB cable to a wall outlet or computer.

Available on both iOS and android, the app is just as simple as the Genie Mini. Connect your phone with the Mini via bluetooth and you’re ready to go. Choose time lapse mode and it gives you the option to either start a new time lapse or use a preset. The preloaded presets give you pre-made settings that should give pretty good success. We recommend that you try them, then change them to fit your need. You’ll find a preset for people, clouds, stars and night traffic. Plus, use the Mini with a GoPro and you can use a few more presets for people and clouds.

As a bonus, you can also save your own settings as pre-sets. The app is pretty rad in use. Say you found a setting that you love, you can take a picture of your setup and assign it to your newly made preset. We had an OK experience with the pre-sets, but we recommend tweaking them to fit what you are trying to communicate with your time manipulation. Next you’ll see Video mode. Just like with time lapse, there are presets like fast pan and slow pan.

Shooting time lapse is really fun. If you’re willing to accept a bit of trial and error, the results can be very compelling. Controlling time through exposure length and time interval gives a producer a very strong storytelling tool.

We started by going to a place where there would be lots of movement: a roundabout in the center of town. We opened the app and powered up the Genie Mini with the hope of shooting. However, we had one large problem: both the app and the Mini needed an update. We bring this up to point out the need to power up and test your equipment before you go out.

We had everything powered on and we made sure all of the media was ready, but because we didn’t verify proper function before hand, we had a slight delay in starting our shoot. After a 12 minute wait, we were now ready to shoot. Our pan was from one corner to the outside of the roundabout.

We set an interval and exposure length with the shutter and got to it. The app will tell you how long it will take to do the shot, as well it will tell you how long the resulting video would be. This is really nice, as sometimes this math can be difficult to do with a million other things on your mind. The one big fallback was that the lowest interval was one second. If we wanted pictures taken more often, we couldn't. This is mostly due to the time it takes to move, then take a picture, but sometimes a shot every one second just isn't enough.

The pan we did was from a lower angle, and caused us to tilt our tripod up. The camera was mounted directly to the Mini via its ¼ 20 screw and the bottom connected to our tripod. In this configuration the tilt of the tripod head creates an arc of the horizon during the duration of the pan. This can be corrected by using the Syrp Ballhead for Genie. The only drawback to that is you will need to shell out another $110. The other way to avoid an unwanted arc is to reduce the distance of the pan, so the arc is less noticeable. A little movement goes a long way and the Genie Mini is a great way to add some production value to a camera and a tripod.

After capturing moving cars, we moved on to people. Shooting a baseball game gave lots of compelling movement and action. With some time lapse and a pan, the very slow game of baseball is exciting and feels alive. Next we shot at the VidCon convention. We shot people lining up for to win something in a giveaway, allowing us to tell the story of that giveaway. We also shot hordes of people walking and milling around, and the added camera movement made the shots come alive, rather than just sit there static.

We then shot some video using the video mode. It made getting a great pan easy and consistent. There were no bumps in our pan, and no slow downs, allowing us to shoot faster with the confidence that they would look great. A big thing to pay attention to is the speed. If the speed is too fast, you can get rolling shutter and if the amount of pan is too much, you might get a shot that takes a long time to finish. The only hang up when shooting video is that the wine of the motors rotating the camera are a bit loud, meaning their sound could make on to your media.

Just about every type of video producer would benefit from the Syrp Genie Mini. It’s compact, affordable and easy to use. We wouldn't recommend it if you require precise control, because even though it's easy to use, it doesn't offer as much advanced control as you might need. For the money, however, it’s a great value. It can be easily packed along with you anywhere and will make a simple setup that much more flexible. We recommend the Syrp Genie Mini. It's easy to use and it does what it says it does.

The Genie Mini delivers smooth pan without the the need for nice fluid head. Get it done right every time with the Genie Mini. Its small, compact and simple to use. Costing only $250, most every producer could benefit from its features. Automated time lapse with a pan is a great tool for storytelling. We would recommend the Syrp Genie Mini.