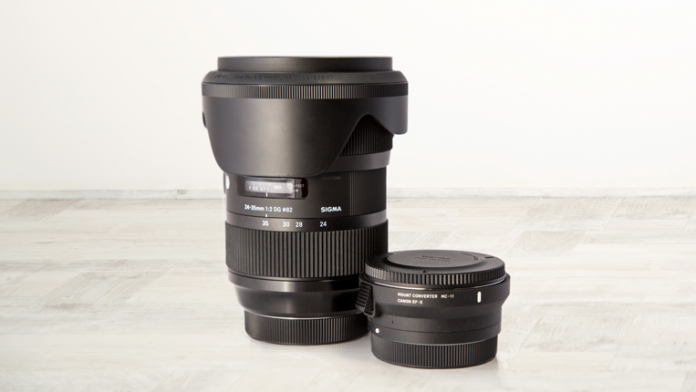 However, there might be a best fit option for you. Our goal with this review is to give you real world information to help you make a better purchasing decision.

We will cover both the Sigma 24-35mm F2 DG HSM Art Zoom and the MC-11 mount converter. With such a wide aperture of f/2 this Art Zoom fits video shooting very well. Plus, with a pricetag of $1,000, it doesn't break the bank. At f/2 you have a very shallow depth of field, so keep focus a priority when shooting at this aperture. You can open it up a whole stop more than other lenses with maximum apertures of f/2.8.

On a full-frame camera like the 5D mkIII we tested it with, this 24-35mm lens gives you an 84-63-degree field of view (FOV). With such a wide viewing area, it’d be a great fit for event videography or shooting in close quarters. The only drawback related to the throw of the lens is that 10mm between the two focal lengths isn't a huge difference. At 24mm you’d be able to get a few feet closer than with the field of view at 35mm.

As expected with a wide angle lens, there is some curvature to your picture when shooting at 24mm on a full frame camera. It’s especially noticeable the closer you are to your subject. At 35mm, you have a FOV similar to that of the human eye, great for a medium shot for an interview.

At 35mm, you have a FOV similar to that of the human eye, great for a medium shot for an interview.

The only notable thing about its bokeh is that the nine-bladed aperture allowed for a nice circular bokeh.

We used the EF mount version of the 24-35mm for this review, shooting it on a Canon 1DX Mark II, 7D Mark II and 5D Mark III. Across all three native mount cameras we used, the autofocus worked great. It was fast and did less hunting than the Canon 24-105mm f/4 L we tested it against. However, the Sigma did not get focus as fast as the Canon.

The focusing motors are more noisy than we’d like. If you need to use autofocus and the natural sound from the camera, expect some focus motor noise to be captured

The lens itself is solid. It doesn’t feel cheap and has a really nice look. It has an internal zoom, so its physical length doesn’t change with the focal length. Its matte black finish and hard rubber rings look up to the task and last through heavy use. The lens shade is heavy duty, however it takes a bit of effort to disengage. We suspect this is because everything is new and not yet broken in. We hope that over time it will become easier to remove.

During testing, we put the lens heads up against the the Canon 24-105 f/4 L, which we use on a daily basis. As an added bonus to using the Canon to compare, the two lenses are the same price.

Overall, at both 24mm and 35mm there wasn't a noticeable difference in the image quality between the two. We shot multiple different exposures with exactly the same compositions and settings. We liked that the Sigma was 2 stops faster, but having the longer zoom was a huge value with the Canon. If choosing between the two, the deciding factor should be if you need your lens to have a large aperture or a wide focal range. Based on our tests, there’s no indication that image quality is a factor.

When comparing the two lenses, we noticed something that is a bit strange. The Sigma will allow you to focus past the infinity focus mark. This instead of putting distant objects in focus, everything was out of focus. This was really nice when we wanted to make pretty bokeh, but outside of testing, we couldn’t find much use. The Sigma doesn’t have hard stops for the focus control. It’s a photo lens not a cinema lenses after all.

The second part of this review is for the MC-11 EF mount converter. The MC-11 is $249 and comes in a two different options: E mount to EF and E mount to Sigma. We choose the MC-11 for EF lenses to a Sony E mount camera. We tested it on a Sony a6300.

Just like with the tests with the native mount, the Canon 24-105mm and Sigma 24-35mm had little to no noticeable difference in the picture quality. The only noticeable difference when using the MC-11 with the Sigma and Canon Lens is that the AF was a bit slower than when mounted to camera with its native mount. It wasn't significant, and if we weren't able to contrast the performance with another camera, it wouldn't have been noticeable.

Is it for you?

Since the Sigma 24-35mm F2 has a constant aperture, this lens is like having a 24 prime and a 35 prime in one. Save your money and buy this one lens instead of two, and with an added bonus, you only have to carry around one lens. Its wide FOV is great for capturing the moment, and fitting into tight spaces.

The Sigma 24-35mm F2 DG HSM Art Zoom is nicely built, has a great image quality and is affordable. The ability to go past infinite focus to only have everything out of focus is a concern, but can easily be overcome by knowing its capability. It’s super fast but offers a short focal length range. Overall we enjoyed using the lens, and the image it creates is wonderful. We recommend the 24-35mm F2 DG HSM Art Zoom and the MC-11; they are just too nice to pass up.

The Sigma 24-35mm F2 DG HSM Art Zoom is affordable fast glass and are nicely built. The short distance of this zoom might be concerning to those needing more. The MC-11 is a nice mount converter but does slow down the AF. Overall, Sigma made some great products and we would recommend them.

Chris Monlux loves coffee in the morning, but never hot, always iced. He’s cool like that. He is also Videomaker’s Multimedia Editor.