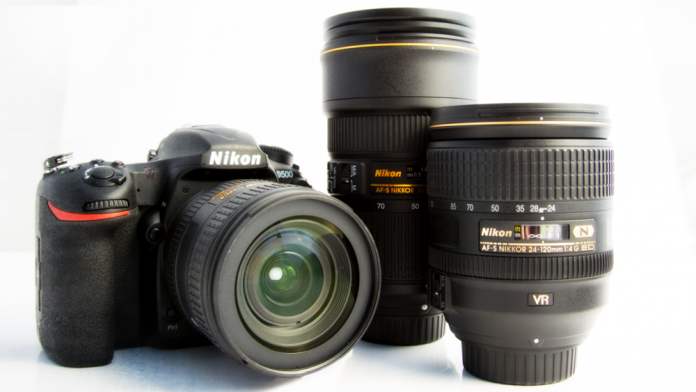 We were excited to see what the D500 could do. Upon its release, it looked to offer a better value than its big brother because it could record longer than 3 minutes in 4K. Since its release, the D5 has been updated to have the same record limit of the D500: 29 minutes 59 seconds.

We set out on a four day adventure to Reno, Nevada, for the annual city wide classic car show called Hot August Nights. We knew we would have lots of different lighting situations to shoot in, from the magical light of dawn to under the stars with only headlights and street lights for illumination.

With fresh batteries and freshly formatted SD cards, we were off to see all of the beautiful cars and test out what the D500 could do. Our first shooting situation was in the parking lot of the Atlantis casino just after dusk. Not only was the parking lot full of old cars, a slow cruise made its way through as well. We tried out the 24-70 f/2.8 first because of the larger aperture needed for low light shooting. We were really surprised how little noise we got. Choosing to up the ISO to gain proper exposure, we didn't shy away from pushing it past where most cameras would start to get noisey. We later tested this in the studio and found that we started seeing noise at ISO 800, but the noise felt less like digital noise and more like film grain. It didn't start to become unpleasant until we hit ISO 3200. The range between 800 and 3200 could use noise reduction and still look good. However, use any ISO above 3200 at your own risk; we can't see it looking professional, no matter how much noise reduction you add. We tested out the extended ISO range, but because the ISO is far greater than 3200, it looked bad. Not only is it not usable, but we wonder why it would even be offered. Unless it's being used stylistically, it's nothing but a noisy mess.

The next shooting situation was the next morning at dawn. Shooting in the downtown area of Reno, we even captured a few photos of our cars. This camera takes wonderful pictures. The photos showed us the wonderful color reproduction and sharp image the D500 can achieve. It was at this time we noticed an interesting design of the 24-70 F2.8. Its zoom and focus ring are reversed from the other two lenses. It was only when we changed lenses that the muscle memory we had built up using the 24-70 made the other lenses feel wrong.

The photos showed us the wonderful color reproduction and sharp image the D500 can achieve.

Now, that's a matter of perspective. As a whole, Nikon is different from other camera manufacturers. Here’s an analogy to help explain our experience: If Nikon was an island and you visited that island, you would notice that everything is a bit different than on the mainland. However, if you were born there or lived there for a long time, the outside world would seem strange. It’s a matter of perspective. A good example of this is which direction of the focus ring rotates. Nikon is the opposite of just about every other lense out there. This is also true regarding the direction you turn the lens to attach it to the body.

Overall, the 16-80mm had the best feel for shooting video. The focus ring was not as touchy as the other two lenses, its size fit the camera’s size, and the focal length worked well as a walking around lens. However, the changing aperture across the throw of the lens is not the best. Having to adjust the exposure because the field of view changed is a pain. It’s not the end of the world, but it does keep thoughts on the technical control instead of on being creative.

The D500’s tiltable screen was nice to have. We shot handheld most the time and being able to get the camera low and still see the screen without having to put our face to the ground was a big bonus. We would have liked Live View be on whenever video mode was selected. Instead, it needs to be turned on whenever needed. It’s just too awkward to use the viewfinder for video shooting. It can be done, but the monitor would most likely be our first choice.

Another odd feature is that the D500 has booth zoom-in and zoom-out buttons. Normally we would applaud more buttons. After all, better control should create a better pro-user experience. But in this case, we just don't see the need for the zoom out button. Like many other cameras, when you zoom-in past its deepest zoom-in, we’d expect it to go out to full view, thus negating the need for the zoom out button. With the D500, this is just not the case. You have to use two buttons to achieve the same control. It’s a small thing, but we would have rather had an assignable button there instead.

Although it’s a bit disappointing that 30 fps is the max frame rate offered by the D500 in 4K, having 60 fps in HD is a plus. We produce our video reviews in 4K, so it required us to upscale the 1080 60 fps shots to match the rest of our footage. Even when shot at night, the 1080 shots upscaled nicely, showing that even when zoomed in, the picture looks fantastic.

Overall, the Nikon D500 is easy to use. It has all of the buttons and knobs to quickly change your functions, exposure and menu options. No matter the lens chosen, the picture quality was wonderful. The video we shot looked great, and we would be very pleased to shoot with it along side any camera in its price range. Holding the camera, it has great ergonomics. It’s substantial without being heavy, and the grip you have when it’s in your hands is superior to most cameras. Would we change things? Yes, but we’d likely want to change things on any camera we use. There is always something that we’d want that fits our needs, but those same features might not be necessary or wanted by another user.

Value in the marketplace

The D500 is the only DSLR that shoots 4K for under $2500. However, if you’re open to getting an MILC, there are many, many options out there. The first one we would point you to is the new Fujifilm X-T2 for $1900. We haven’t been able to test it yet, but for the money, the specs look great. Another mirrorless camera to consider would be the Sony a6300. This is a camera we have used and tested, and overall, it’s a great value at $1000. You just need to be aware of its shorter battery life and possible overheating issues.

There is one thing to consider before choosing any camera: What lenses do you already own? It’s not as big of a problem as it once was because of the abundance of lens adapters, but needing an adapter will add more cost to your purchase. With that in mind, if you have Nikon lenses, it could be a benifit to stay with a Nikon body.

The quality of the images that come out of the Nikon D500 are wonderful. The pictures it takes are great as well. It produces a beautiful picture, and even when there is noise in your picture, it's more pleasing than most. If you’re switching from another brand to Nikon, the change in muscle memory might throw you off, but it's a temporary problem. It is on the high side of cost when compared to some MILCs, but it's the best price at the moment for a 4K DSLR. If you want a great looking video camera that also takes beautiful photos, we would recommend the Nikon D500.

If you are choosing a lens, it’s important to know how you will be using it. This will help you choose what field of view you need, your zoom length and your aperture speed. Let’s run down the three we tested with the D500.

With a great focal length for all around shooting, this lens costs $1,100 and has a 9-blade aperture and vibration reduction (VR) with two modes, normal and active. It’s an externally zooming lens, has a aperture range of f/4-f/22 and requires a filter size of 77mm. It was our least favorite of the three lenses we used because of two things. The first is the f/4 maximum aperture. Although constant across the throw of the lens, this could be an issue shooting inside without an abundance of light. We would have liked it a stop faster at f/2.8. The second is that the focus ring is quite touchy, giving less control than one might want when shooting video of anything moving at a larger aperture. Because it is an affordable price for what you get, we liked it, but would have liked better usability.

This was the best feeling lens of the three and has a very usable focal length. It costs $1,070 and has a 7-blade aperture and vibration reduction with normal and active modes. It’s externally zooming with an aperture range of f/2.8-4 – f/22-32. Like we said, it had the best feel, but we would have like it to be 2.8 across the throw of the lens. Having to adjust exposure to get a different FOV is a bit annoying. However, it had the most usable focus ring for shooting video.

Though it has a constant aperture across the throw of the lens and our favorite focal range, this lens a bit large and is the most expensive of the three lenses at $1,800. It has nine blades, is externally zooming, has an aperture range of f/2.8-f22 and includes vibration reduction in normal and active modes.

This lenses’ specs are the best of the three, but it offers some strange design options. Firstly, the focus ring is the outside ring instead of the inside one like on the other two lenses. Second, it’s large when compared to the body of the D500 and also heavier than the other two.

The Nikon D500 takes beautiful pictures and shoots great looking video. As of now, it’s the only DSLR that shoots 4K in its price range, however it’s much more expensive than mirrorless cameras with similar capabilities. Overall, we would recommend the D500.

It’s important to Chris Monlux that the reviews he gives are not bad or good, but rather fair and honest. He is also Videomaker’s Multimedia Editor.