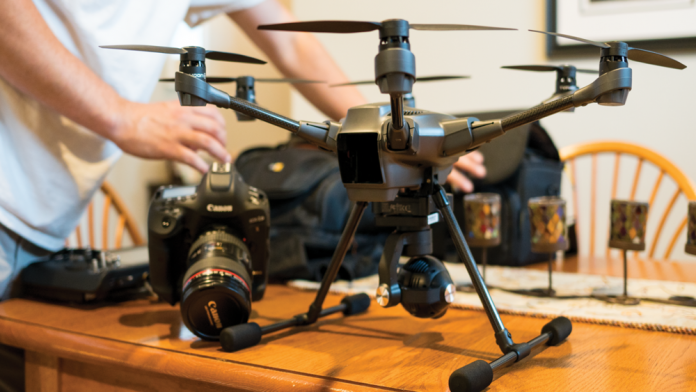 Yuneec announced the Typhoon H at CES 2016. It’s a hexacopter with retractable landing gear and a detachable camera that shoots UHD 4K. The specs and demos at CES impressed us enough that we gave it our Best Drone of CES 2016 award. On paper, it’s very cool. In fact, we started this review thinking that it could be the DJI Phantom 4 killer. We were rooting for any drone that could bring real competition to the drone market. However, we didn't have the experience we were hoping for.

Before we jump into the specs of the Typoon H, lets give a little back story for Yuneec, as they aren’t a brand everyone is aware of. Yuneec was founded back in 1999, but in 2014 they made the Typhoon Q500 quadcopter. In 2015, Intel invested $60 million into Yuneec, starting a partnership for further development.

Yuneec touts that their flight time with the H is up to 25 minutes. Although that wasn't our experience, it was pretty close, we had 4 flights with a range of 20-23 minutes. All of those flights were quite different. They ranged from demanding high performance flying  to light, mostly hovering flights.

The Typhoon H has a detachable 3-axis gimbal and UHD 4K camera. Again, that is an option only rivaled by the Inspire 1 in the DJI line up. We must point out that we had an issue with the rubber shock mounts for the gimbal right at its detaching point. One of the four mounts was not connected, and it came this way new from the manufacturer. It was a bit of a pain to get it connected again, but we were able to remedy it.

Let’s start off with our very first flight. We powered up what Yuneec calls the ground station, which is their name for the controller. We let it start up, then powered up the drone itself. Stepping back to a safe distance, we readied for flight. This is where another problem became apparent: Although we could take off, it seemed that the camera was not connecting with the ground station. The problem turned out to be the camera’s connection to the drone. After moving the camera ever so slightly, the connection was made, and we were ready to fly. We should note that for the next four flights, we experienced that same connection problem when first powering up.

The ground station has a built-in LCD screen, so no need for a phone or tablet to monitor the flight. It’s truly an all in one purchase. You don't need to buy anything other than the drone to fly. It’s nice that you don't have to buy a monitor, but it made the controller really big. Because of its size, getting a comfortable grip on it was hard. A lanyard is a necessity. When using the controller, the sticks and switches are odd to use. This is especially noticeable if you are an RC pilot, as its form factor is unique. Overall, we found the ergonomics of the design to be weak.

In the air, the H is very fast and responds well to your control. It didn't feel heavy in the sky, but it wasn't floating around too much either. We couldn't put our finger on why it felt different from other drones, so we decided to keep our eye on it during future flights.

It was our 5th flight. We were testing its stability hovering to see how much movement it had when trying to stay in one place. There was a slight breeze at 6 mph, but it didn't seem to be affecting the drone much while it was in the air. When hovering, it stayed within three feet of the central hover point in each direction. We also wanted to see how it felt when flying low, with the landing gear up and down. During these tests, we were shooting time-lapse of the flight for another review, and we landed briefly to turn off that second camera.

During the second part of flight number five, the Typhoon H went down. We were hovering around 30 feet in the air, slightly in front of our position. After about a minute in the air and when our hands were completely off the controller, it flew away fast — at what appeared to be full speed. We quickly looked down at the controller to see an error saying something to the effect of “rotor failure, please land safely.” We began to run after it, but it was quickly out of sight. We didn’t see it go down. When running in the general direction it flew off in, we thought that surely it had already hit the ground. Just then a man walking his dog came and indicated where it had crashed — on a construction site at least 400 yards away from where it went rogue.

The man said he saw it go down and “smash into a million pieces.” My heart sunk. We was hoping that it would have landed safely, but that wasn't the case. It ended up deep in a pile of dirt. Its lights were still blinking when we found it.

All the debris fell within five square feet of the crash site — except the camera. At the time of the fly-a-way, the landing gear was up, and it appeared to have landed belly down and camera first. We assume, because the camera is detachable and because the landing gear was up, it was projected far away. The camera was nowhere to be found. We searched for more than four hours but were unable to recover the camera. To add insult to injury, all of our footage had not yet to been removed from the microSD card that was in the camera. We lost all footage, including the crash, the camera was missing and the drone was all broken up — tragic.

Not many of the products we review here at Videomaker have an injury hazard like that of a drone. We feel we have have an ethical obligation to our audience that we tell them about the crash because someone could be maimed or horribly injured. This is a risk all drone pilots need to be aware of

After the crash it took me off my game. I have tons of drone flying experience, but the crash caused me to doubt my ability, even though I knew it wasn't my fault. After seeing the debris from how hard the drone crashed, my confidence to keep a drone from harming someone was severely affected. I have since regained it, but it gives me a new perspective on drone flying — there is real, unpredictable risk.

We notified Yuneec and postponed this review a month so we could test a new unit and either validate our experience or show that our crash was a fluke. However, as of today, Yuneec has offered no further contact or follow up on their promise to get us a replacement. We would have liked to be able to say that the crash was a unique experience, but without further testing, we have only our own disconcerting experience with Typhoon H to draw from.

Let’s Sum it Up

There are many video producers out there who would benefit from a drone with the specs of the Typhoon H. However, because of our experience, we cannot recommend it to anyone.

The Yuneec Typhoon H looks great on paper and in demos, but it had many problems, one of which could endanger those around you. There are several positive reviews of the Typhoon H, so we hope that our experience is an anomaly and that future Yuneec products don't suffer from the same issues.