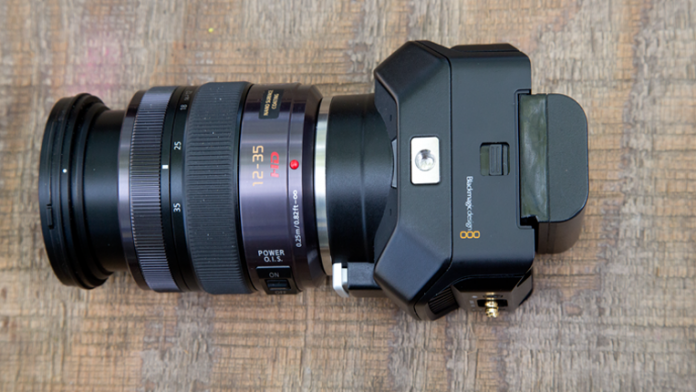 Blackmagic Design is known for their disruptive releases every year. NAB 2015 was no different, announcing the URSA Mini, the Micro Cinema Camera and the Micro Studio Camera 4K along with many other non-camera announcements. The Micro Studio Camera is unique because it doesn’t record internally and has no built-in way of previewing what’s being shot. In essence, it’s a sensor with a lens mount and some outputs. But that makes it uniquely qualified to do what the it’s named to do: shoot in the studio.

The Micro Studio camera has the same form-factor as the Micro Cinema Camera, with one large differentiating feature: the inability to record video. But because it lacks the ability to record, there are a few more options with the Micro Studio Camera. The biggest and most notable option contrasting it from its brother camera is that it shoots in UHD 4K and not just 1080 HD.

The Micro Studio is designed with installation in mind. A control room operator can control both focus and aperture control remotely using the expansion connector or with an ATEM Switcher via SDI when using compatible lenses. Because of that remote ability, news operations and other live broadcasts will be able to operate their camera without a camera operator on the floor of the show. That will allow for the reduction of production costs.

The Micro Studio has a Micro Four Thirds image sensor, shoots both UHD 4K and 1080 HD, has an integrated mic and even offers talk back through its mic input using iPhone earbuds. It has one ¼-20 mounting option on top of the camera and three on the bottom.

Let’s take it for a spin.

Lacking a broadcast studio to test in, we paired the Micro Studio Camera with Blackmagic Design’s Video Assist. The Video Assist allows us to record the output of the camera, so that we could edit and evaluate the quality of the footage. With this setup, there is one major drawback; the Video Assist only records in 1080 HD.

Like other Blackmagic Design products we’ve evaluated, the Video Assist needed a firmware update before it would function properly. In this case, it would not record at all. Once the firmware was updated, we set out shooting in ProRes in 1080HD. We wanted to take the camera out in the field to shoot and to get a feel for the camera.

As a side note, the first major strength of the Micro Studio Camera is that it’s a studio camera that can actually be used in the field.

It was apparent while putting this rig together that any hand held shooting would be impossible — it’s just too awkward — so we shot off a tripod, and that was that. While out shooting, we experienced the next issue that the Micro Studio Camera has; the menu is only viewable via its HDMI output, not the 6G SDI DIM output we were using to connect to the Video Assist. Thankfully we had an HDMI cable handy and we were able to access the menu and continue shooting.

Overall, the picture quality was nice. We didn’t find any major flaws in the picture quality at all. The colors were nice and true, plus it showed a nice dynamic range. When shooting, we shot at a local swimming hole, shooting scenes in full sun, partly shaded and full shade. In each instance, there were still details in the highlights and shadows. To operate the iris, you use the up and down buttons on the camera. Just like most interchangeable-lens cameras, the Micro Studio Camera didn’t come with ND filters built in, so having one handy when using this camera in the field is a must.

It’s very important when addressing this camera that it is judged based on what it was meant to do. It’s a camera that will be installed in a studio, made into an eye in the sky or for some remote shooting production where there is a control room with a switcher present.

Would we recommend this camera to someone looking for a stand alone camera? Most definitely no. It’s just not designed for that. Although it can be equipped to function that way, there are more cost effective ways to get those features through other camera options.

But, if you are looking for great value in a studio camera, then this camera is for you. Houses of worship, broadcast TV stations and live event production would all benefit from a bunch of these for the cost of just one camera from another brand. The picture quality is nice, and its flexibility for control room operators is stellar. It will give your production the edge it needs. The Micro Studio Camera 4K can help lower overhead because a camera operator isn’t needed and lastly, it puts out 10bit 4:2:2 via the 6G- SDI DIN output.

Chris Monlux is tall, has a beard and is Videomaker’s Multimedia Editor.