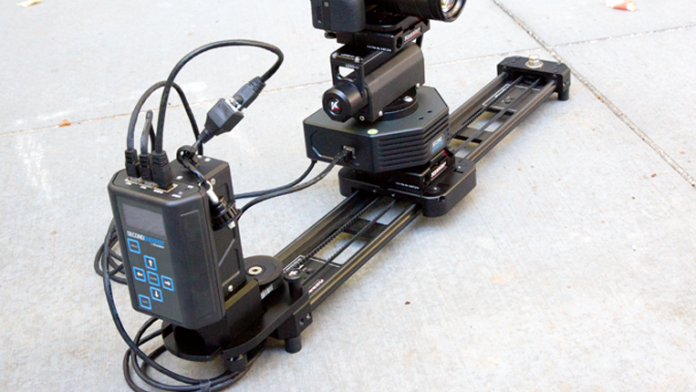 Dolly technology is changing fast. Just 10 years ago, capturing a quality dolly shot involved hiring multiple crew members to laboriously level sections of track, additional crew to push the heavy board that sat on it and a cinematographer with the hands of a surgeon to make the shot look tolerable enough to keep. Thankfully, companies like Kessler Crane have made certain that those days are long gone. By creating their Second Shooter motion control system, which allows shooters to automate the slide, pan, and tilt of any Kessler dolly, they’ve brought camera movement one step closer to repeatable perfection.

They say Rome wasn’t built in a day — and when you first look at the bevy of parts that the Second Shooter ships with, you may be tempted to think the same about this motion control system. Thankfully, we found that wasn’t the case. Though there are enough parts in the box to make you feel like a magician pulling rabbits out of a hat, assembling the Second Shooter was actually rather easy. This was mostly due to the fact that almost all of the parts Kessler included in the “Complete” bundle were familiar and intuitive to even the most casual of shooters. In fact, we didn’t even use the directions the first time we assembled it. Everything just seemed to make sense.

Though there are enough parts in the box to make you feel like a magician pulling rabbits out of a hat, assembling the Second Shooter was actually rather easy.


With so many parts, we started to assume that some were never going to see the light of day. Quite to the contrary, we found each and every part of the kit to be incredibly useful. Together, they combined to help us assemble the Second Shooter quickly while getting a panoply of shots. As an example, Kessler included three quick release plates in our kit — one for mounting the pan/tilt head to the dolly, one for mounting the camera to the pan/tilt head and one for mounting the camera to a tripod. Though that may not appear to be entirely noteworthy, you’d be surprised at just how much time can be be saved by not having to change plates for every piece of gear you own. In addition, each quick release plate was verifiably pock-marked with mounting points for cameras, sliders and motion control heads. There were threads on the front, rear and center of the plate for everything from a standard ¼-20 or ?-16 inch bolt, to proprietary sizes like 5/16 and 8/32. Much of the reason that Kessler was able to include so many mounting points was due to the plate’s inch-thick aluminum and stainless steel construction. This was some solid stuff meant to survive the kind of beating that outdoor shooting tends to deliver. Speaking of solid, we were impressed by how well the plate and safety latch gripped both our camera and the pan and tilt head. The safety latch gave a satisfying click when the plate was pressed firmly on top of the quick release plate and with the cam-lock latch engaged, we felt confident that we’d never find ourselves picking broken camera pieces off the ground. 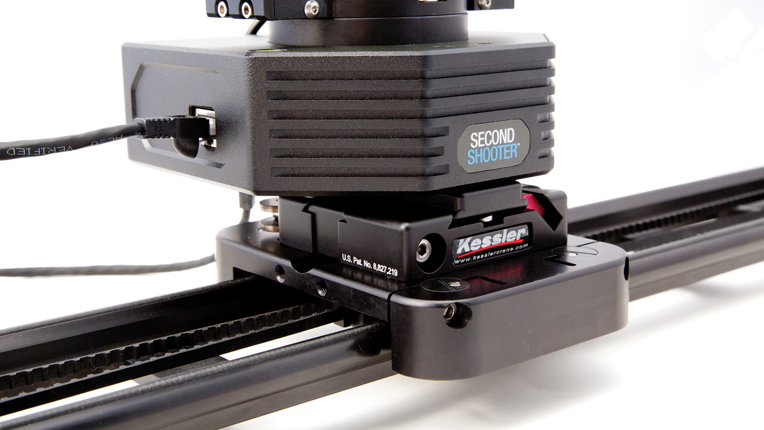 In addition, Kessler also included two interchangeable gears for the motor. These gears gave us the ability to either make our dolly movements slower for time-lapses or faster for real-time shots. Best of all, if you get confused about which gear to use to speed up or slow down your movements, Kessler was kind enough to include a cheat-sheet on the back of the controller for quick reference.

As part of the Complete Bundle package, Kessler also included a time-lapse cable for a camera of your choosing, a micro USB cable for connecting the controller to a computer for firmware updates, and an interchangeable power adapter that can fit the standard receptacles of any country in the world. There’s also three RJ-45 ethernet cables for communication between the controller and all of the motors.

While these components are great and are necessary to make a three-axis camera move possible, the real heart of the Second Shooter lies in the controller and the motors. At 4.5 pounds and more than five inches in diameter, the pan/tilt motor was by far the heftiest part of the Second Shooter. In fact, if it ever stopped working, the pan/tilt motor could probably double as a barbell. All levity aside, we were impressed by the build, accuracy and quietness of both the pan and tilt motors. As long as we set the speed of the motors at 50 percent or less, the noise level was more than acceptable for shooting video with sound. Just like every other part of the kit, the pan and tilt motor was built to last. It’s made out of solid aluminum in order to be both lightweight and strong.

The Second Shooter’s dolly motor was also similar in build quality and design. It comes with an interchangeable pulley system that mounts to the edge of any Kessler slider dolly via a thin aluminum plate. We liked how simple it was to attach the motor to the aluminum plate via the two supplied bolts. The whole motor system could be assembled in just a few minutes. That being said, the best part of the motor had to be the MagnaLink magnetic connection on the back. This system allowed us to mount the battery and the controller right to the motor without having to press a button or pull a latch.

Last but certainly not least, the Second Shooter comes with a lightweight controller. The controller’s interface is rather simple with directional arrows, an enter button, a menu button and a shift button for alternate commands. Though we loved the effort to minimize the amount of buttons needed to operate the controller, we weren’t big on the way the buttons felt. Simply put, they were a little cheap. However, the software interface was so intuitive that it largely made up for that little design shortfall.

In addition, the top of the controller had three Cat-5 ports for the slider, pan and tilt motors as well as an intervalometer. It even had a small LED flashlight to help us assemble the unit for early morning time-lapses. On the bottom of the controller, there were ports for power, data (via mini-USB) and an expansion slot for joysticks. While we really liked the durability and simplicity of the controller, we felt that Kessler could have fit everything into a much smaller design which could have saved us precious space in our shooting kit. Nonetheless, we were more than happy with the overall quality of each component of Kessler’s Second Shooter kit.

As the name suggests, the purpose of the Second Shooter motion control system is to be able to achieve perfect and repeatable time-lapse and real-time dolly shots. It’s a one-man-band’s dream since it’s possible to shoot two angles on an interview at once — a wide dolly shot and a close-up static shot — all while saving the money of hiring a second camera operator.

We decided to put this feature to the test while filming an interview. The controller for the Second Shooter allowed us to set up an automatic two keyframe move by simply changing the dolly, pan and tilt positions and pressing enter to set the keyframe. Once we had our start and ending keyframe set, the controller did all of the work for us. This is where things really got fun. Kessler’s controller has the ability to ease-in and ease-out of each keyframe, which allowed us to have the dolly move come to a natural stop and start. Even better, Kessler gives its users the ability to set how long the easing occurs. We used this feature to make the start and end of our moves almost imperceptible.

We also really came to like the looping feature for interviews. With this feature on, we could walk away from the Second Shooter while it continuously moved back and forth along the slider track. When it came to the last keyframe, the unit began the same move in reverse so that every moment of the dolly shot was usable in post – something your editor will thank you for. The only real complaint we had was how many cables we had to leave dangling from the Second Shooter in order to make the motion control system work. As any gaffer or shooter knows, bad cable management can lead to snags and even broken equipment so we were very wary of how the cables were faring throughout the dolly move. We would have liked to have seen an option for powering and controlling the three motors without using cables. Not only would it have made setup easier, it would have eased our minds significantly. Nonetheless, we were happy with how quiet the Second Shooter’s motor was and how perfectly it performed the moves that we programmed.

In our final test, we decided to try a three-axis time-lapse move. Setting up the motion control unit was entirely the same as setting it up for video. The only difference was that we needed to also attach a time-lapse cable between the controller and the Canon DSLR that we were shooting on. We weren’t too pleased about the location of the port for the time-lapse cable. By forcing us to connect the time lapse cable to the controller, we had yet another cable with the potential to get snagged during our dolly move. It seemed like a much better idea to have the port on the pan and tilt motor that the camera already sat on. That being said, we couldn’t have been happier with the way the time lapse turned out. The setup was easy, the motors worked flawlessly and the results were amazing.

Dan Bruns is an Emmy-award winning documentary filmmaker and editor.