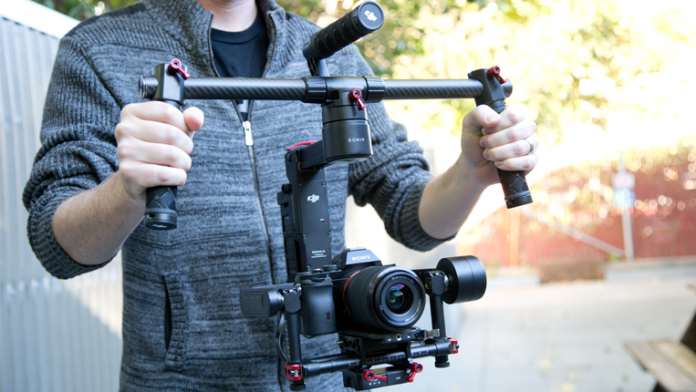 The Ronin-M is arguably the most gimbal for your money and a great investment for low budget filmmakers and event videographers. The freedom to move the camera in any way you can image smoothly without tracks, jibs or complex setups is liberating. This is especially true for those of use using DSLRs, which often suffer from serious rolling shutter issues, so any camera movement must be free from vibrations and jerks. When the first Gimbal hit the shelves a couple years ago, the DP community’s collective head exploded with ideas. Many, myself included, saw this as the most liberating technological advancement since the transition from film to video. The problem was that the MoVI started at around ten thousand bucks, easily in range of established production houses but out of reach for many independent filmmakers and videographers.Then something really exciting happened, DJI, the company that makes the famous Phantom drone, found a way to make a handheld stabilization system much cheaper than MoVI, this was the Ronin. Fast forward a couple years and we have the Ronin-M, a lighter and more refined and cheaper Ronin built for smaller cameras.

The Ronin-M can handle basically any DSLR as well as small cinema camera such as the Canon C series or even the Alexa Mini with a lighter lens.

The DJI Ronin is a lot of gimbal for your money. It has it’s issues but is a very exciting tool, and priced at $1,399, it is easily in the price range of filmmakers with even modest budgets. The Ronin-M has the capacity to carry and stabilize a camera rig up to eight pounds. The Ronin-M can handle basically any DSLR as well as small cinema camera such as the Canon C series or even the Alexa Mini with a lighter lens. We did all our testing with Sony a7S with Canon L series and Zeiss ZE glass.

The Ronin-M, like the original Ronin, does not look like much, certainly when compared to the original MoVI. DJI designed something very similar but much more basic. Like the MoVI, this design consists of a top bar from which the actual gimbal attaches in the center, a top handle and two vertical grips which can be fixed at any point on the top bar and rotate 360 degrees for optimum comfort and ease no matter the position. This simplicity has been duplicated dozens of times by various companies, and for good reason. The only easier way to manage a gimbal is the MoVI ring, but that increase the rig side dramatically. Where the Ronin-M differs from the MoVI is the gimbal itself, which is smaller and appears to be constructed more simply. This low profile design makes the Ronin-M very easy to put together. The first thing we did, way prior to reading the manual, was to put the unit together, which was very easy to do just using intuition. The total time took about five minutes, and after that only about two to three minutes to put it together. This does not include balance, more on that later. The gimbal very easily slides and locks into the top handle from which both sides of the top bar are attached by screwing them on. While they go on easily, they also go off easy, so keep an eye on it — ours tended to loosen after shooting for a while. The two handles slide onto the top bar and are tightened via a thumb screw. Much of the frame is built with carbon fiber and magnesium, making it super strong but very light, which is a huge plus when shooting all day.

The Ronin-M is powered by what DJI calls an intelligent battery, a 3400mAh LiPo that is listed as lasting up to six hours. There are two reasons why I suspect DJI calls their battery intelligent. The first is that the battery acts as an adjustable counter weight. The second is how long this battery lasts. While they list the battery as lasting up to six hours, we shot all day and it never dropped below 25 percent. The battery life is very impressive. On the many shoots we did with the Ronin-M, not once did I ever feel in danger of running out of juice. There is a handy four-bar indicator light on the top of the battery so you always know how much power you have left.

Balancing is a Beast

Gimbals are notorious for being difficult to balance and the Ronin-M is no exception. For gimbals to work best, they need to be near perfectly balanced. The Ronin-M is a bit forgiving; if you’re off a little it is usually fine, though the roll axis has a tendency to drift which is exacerbated by being off balance even a little. This can be fixed by just restarting the unit, which takes about 15 seconds total. The Ronin-M is balanced without the need for tools — which is nice — but it is still tedious. The first time we balanced the unit it took about ten minutes. Once we got the hang of it though, that time was reduced to somewhere between three and five depending on how frustrated we got in the process.

The Ronin-M comes with a RC controller for a second operator to adjust the pan, tilt and roll. You can also buy the thumb controller unit, which will do the same thing. In many circumstances these are necessary to get the shot because, depending on whether you have smooth track on or off, the camera will not turn with you, as is kinda the point. Smooth track is a feature accessed by the DJI Ronin app called DJI Assistant, which we loaded and used with an iPhone 5. This app allows you to calibrate the camera, automatically turn smooth track on and off and adjust how quick and responsive the camera tracking and motion is. The app is not bad; it could be a refined a little but we were able to navigate it without problem.

The Ronin-M, like all gimbals, has a bit of a learning curve, though once you get it shooting is a breeze. It is just as liberating and fun as you think. We walked, ran, stumbled up and down stairs and rode in a bumpy car ride, all of which looked smooth on playback. The Ronin-M feels very natural in your hands whether you're holding it above your head, in front of your face or by the top handle. The unit can be turned sideways for what they call brief case mode, though we never came up with an instance where that was more comfortable or convenient. The computer and motors in the Ronin-M will take out most of the handheld jitters and small movement. Footage from the Ronin-M, or any gimbal, looks slightly like warp stabilized footage in that the video appears to float — but not in a bad way. What would be otherwise very shaky footage is not just usable, but in fact pleasant. Our favorite thing to do with the Ronin-M was to pass the camera to another operator over or through barriers, shots that are near impossible without a handheld gimbal.

Do not expect to use the Ronin-M, or any other gimbal for that matter, without a field monitor. We tried; its near impossible. The rear facing screen of most camera is not visible due to the gimbal plus more times than not the camera is not where your eyes are. A field monitor clips very easily to the frame of the Ronin, along with any other gear such as audio equipment like receivers and mics.

The Ronin-M is a great deal, for the price of a decent lens you get liberation. Your DSLR or mirrorless camera can be taken anywhere with the Ronin M without worrying much about rolling shutter. The vast majority of the footage we shot was super smooth. The big downside to the Ronin-M is the “Roll Drift” we experienced. It was a real pain at times to have to reset the unit, but if you have someone operating the wireless controller it can be easily adjusted for. Overall, the Ronin-M is very comfortable and easy to use. In the near future, handheld gimbals will likely be standard, as they should be.