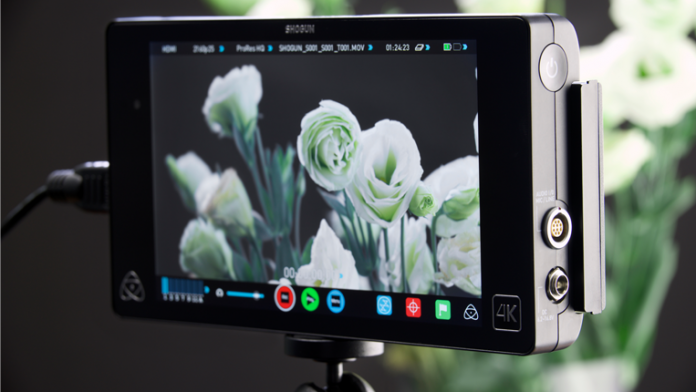 Today there are many superb cameras on the market that have the ability to shoot high quality 4K but do not have the internal resources to record anything above HD. If you want that glorious 4K you have to use an external 4K recorder and until recently there were few if any options for anyone who didn’t have buckets of money to spend. Over the past year, two popular solutions have arose, Convergent Design’s Odyssey7Q and the perfectly named Atomos Shogun. Atomos has been making splashes over the past few years with their external video recorders and monitor recorders, each named in an equally awesome manner: the Ninja, the Samurai and the Ronin, recorders that have been lifeboats for many DSLR shooters. What makes the Shogun so fantastic is that it is a beautiful on-camera HD monitor and 4K recorder for under two grand.

What makes the Shogun so fantastic is that it is a beautiful on-camera HD monitor and 4K recorder for under two grand.

The Shogun is is obviously geared toward Sony a7S users, who already have an amazing low light sensor that can shoot glorious 4K in SLog2 but no way of recording it. The Shogun essentially turns the a7S into the Sony FS7 with better low light minus the ergonomics and connections. It should be noted that the Shogun is also a great addition to the Sony FS700, which can also output 4K but not record it internally. We also tested the Shogun with the GH4 with 4K and a Blackmagic Design Pocket camera in HD for fun and all performed wonderfully.

There are two options when purchasing the Shogun. You can buy just the “barebones” unit currently listed at $1,695 and equipped with the monitor, AC power supply, soft case and caddy for an SSD. You also have the option of buying the “Full Version” for $1,995 which comes with a hardcase, AC power supply, five SSD caddies, PowerTap adapter, NP-770 Battery, Lemo type to XLR cable, SATA/USB3.0 docking station and a limited one year warranty. Either package you choose, you’re getting a lot for your money. The Shogun can record up to 10-bit 4:2:2 in Prores HQ/422/LT or Avid DNxHR HQ/SQ/LB, which if you’re using a Sony a7S is a significant improvement over the internal 4:2:0 color sampling. It records in a variety of resolutions including UHD 3840 x 2160, FHD 1080p and HD 720p. The shogun can also overcrank at 120 fps in HD.

The monitor itself feels small for being a 7-inch full HD display. It feels no larger or heavier than it needs to be. With the exception of the on button, the entire interface is touch screen, which is problematic with an already glossy display. The Shogun has one HDMI in and out, one 12G-SDI in as well as out, an audio mini jack and two XLR in and outs courtesy of a Lemo adapter that comes with the full bundle. Those XLR inputs are fantastic when using with a DSLR such as the a7S, which suffers from only having a single mini jack for audio input.
The screen on the Shogun is beautiful at full HD 1920 x 1080; it is sharp, has great color and great contrast. The big downside to the screen is that, due to its touch screen nature, it is highly reflective, a hood is a must have for almost all shooting environments.

While the Shogun is by no means light, it is not that durable and certainly not weather proof, it would be highly recommended to leave the unit behind when shooting in any precipitation. The unit is plastic and will not hold up to daily abuse like much of our production equipment has to endure. In fact, while shooting, the Shogun freed itself from its mount and fell about two feet to a hardwood floor, resulting in cracked screen. Treat the screen like an ipad, it's about as durable — do not drop!

Setting up the Shogun is very easy. We tested it both with a GH4 and Sony a7S in 4K and HD with a BlackMagic Pocket Cinema Camera, all we had to do was plug it in via HDMI and the Shogun automatically detected the signal. For 4K in the a7S you do have to go into the camera’s menu and turn 4K output on.

The Shogun’s interface is very clean and intuitive. Because the Shogun does not suffer from an extensive and cluttered menu, navigation is simple and the system is very easy to figure out. Turing on focus peaking or changing the color of it, adjusting zebra stripes, false color or the focus zoom is just a couple clicks away. Personally, it would be nice to have a couple customisable tactile buttons for such features but this lack is not the end of the world.

Keep in mind the image on the Shogun is only as good as the camera plugged into it, that being said the recorder did not disappoint. With the Sony a7S, there is much less noise when shooting in 4K then downscaling to HD. Not only is there less noise, but the image is much sharper and clearer. There is a lot more noise when recording 4K in APS-C mode because the Shogun actually has to upscale the image due to the loss of pixels. Try and avoid this if at all possible.

The Shogun records to standard solid state drives that are housed in custom Atomos caddies. The amount of record time varies dramatically depending on what format and resolution your shooting, but we got about 36 minutes in ProRes HQ with a 240GB drive. Offloading the footage is a breeze with the provided USB3 SSD Dock and once ingested into Premiere CC, it edited nicely.

The Shogun uses the standard NP Sony Battery but the life is not great. The provided battery will get around 30 minutes, so investing in batteries is a must. The Battery indicator is ludicrous, there are only four icons, full green, half green, red and blinking red, though it is not consistent and will go back and forth from green to blinking red, a real percentage indicator would be a nice addition. Atomos tried to amend this in the most recent firmware update, now it will give you a 25 percent and 10 percent warning.

The Atomos Shogun is a fantastic piece of gear, not only because it comes in at under two grand but because it have some very high-end features. The display is gorgeous and it is, for the most part, well conceived. Short of some minor issues, such as a highly reflective glossy screen and horrid battery life and indication, the Shogun is a real pleasure to use especially with the Sony a7S. This is a highly recommended addition to anyones A7s or FS700 kit.

This is a really fantastic monitor recorder, not just for the money but with tons of great features the Shogun to a great addition to any DSLR tool kit.