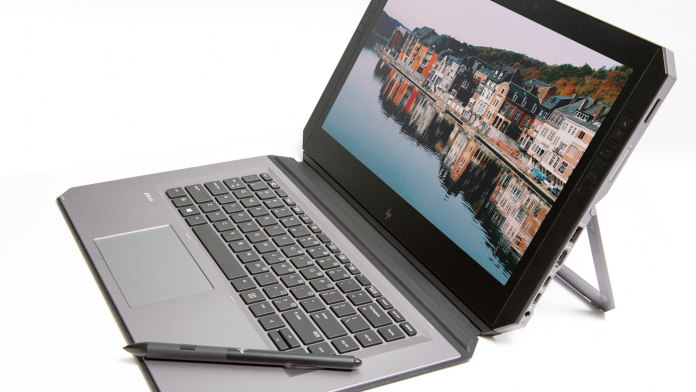 HP touts the ZBook x2 as the solution to the creative professional on the go. While the specs back up their claim, the introduction of a detachable tablet as a workstation is a very new idea. Though the ZBook x2 can easily handle video editing work, it has a few unique issues that could be a deal-breaker for some users.

Released at Adobe MAX in Las Vegas in 2017, we were there to see the response from the large creative community first-hand. For some, the ZBook x2’s detachable form factor is a welcome idea; for others, HP is going to need to win them over. Once we got our hands on the ZBook x2, we put it to the test to see how usable it is and how well it can handle the requirements of video creators.

For some, the ZBook x2’s detachable form factor is a welcome idea; for others, HP is going to need to win them over.


The review unit we tested has almost all resources maxed out. The internal drive is the only specification that isn’t the top option. It’s configured with a quad core 8th generation Intel i7 1.9 gigahertz (GHz) processor boostable to 4.2Ghz and 32 gigabytes (GB) of RAM. It also offers discrete graphics with an Nvidia Quadro M620. Operating on Windows 10, it has a UHD 4K DreamColor Touch display, a detachable backlit Bluetooth keyboard and a pen that offers 4,096 levels of pressure sensitivity.

HP designed the ZBook x2 for workflow and mobility. They wanted you to be able to take the ZBook x2 to a meeting, scratch down some ideas with the included pen, then go to the coffee shop and draw up an idea in Photoshop or Illustrator. Back at your desk, you can connect to dual 4K  external displays and animate your drawing in After Effects without needing more resources. Can the ZBook x2 perform all of this as promised? That’s a pretty tall order.

The first part of the ZBook x2 that we need to address is the form factor. It’s a tablet with a Bluetooth keyboard that magnetically connects. The keyboard feels great — nothing like the shallow keys of a MacBook Pro with Touchbar. However, if you want to use the  machine on your lap as a laptop, it’s not going to stay open on its own. The screen has a kickstand to give it the laptop form factor, but is very awkward sitting on an actual lap.

As a tablet, it’s quite amazing. The pen is powered by the screen, so it won’t need to be charged to use — it’s always ready. The ZBook x2 has programmable buttons called Quick Keys on each side of the screen that you can map to tools, keyboard shortcuts and other utilities. The screen is fantastic. It uses a glare-resistant coating, and because of its resolution, it can handle the fine detail required for drawing or designing. The biggest drawback of the ZBook x2 is that it’s heavier than we’d like, but then again, it is packed full of resources.

As a workstation, we were impressed with what it could do. We were quite skeptical that anyone would want to video edit with a tablet and pen. However, using the pen to edit video was no big deal. We found that the resolution of the screen made selecting some effect controls in Adobe Premiere Pro CC difficult. This isn’t enough to disqualify it as an editing system though. With time, we see users being able to get used to its sensitivity. You also don’t have to use the pen to edit. You can plug in a mouse, and it’s as good as gold. Getting past the interface, within Premiere Pro, we played back UHD 4K H.264, 60 Mbps MOV files from a DJI Phantom 4, and while there were dropped frames during playback, it was not more than with the other laptops we tested against the ZBook x2.

To test the abilities of the ZBook x2, we ran PCMARK10 for a standard benchmark. We also rendered from both Premiere Pro and After Effects and compared the performance to the last two generations of the MacBook Pro.

The PCMARK10 score for the ZBook x2 is 4023. To put that in to some context the HP ZBook 17 inch we reviewed in January 2018 more than doubled that with a score at 8772 — but also comes with double the price tag. A similarly priced laptop from Acer, the Predator 17x had a score between 4004 to 6789 depending on the overclocking of the CPU. We should note that both of these laptops are of significant size and weight. It’s unlikely you would compare the three to buy if size is an issue. A score of 4023, considering its size and price, is very good. Consider, too, that the ZBook x2 offers a unique form factor and pen functionality.

Throughout this review, we put the performance from the ZBook x2 against more standard machines. For the marketplace, we wanted to look at systems that offer similar functions and resources. Each machine in this marketplace will be compared to a similarly configured ZBook x2. To qualify, each machine must have an Intel i7 processor and a touchscreen.

First up, is the Lenovo ThinkPad T470 Ultrabook for 2,270 dollars. This is the fastest ThinkPad available but does not offer a quad core. Instead it has a 2.80 GHz Intel Core i7 dual-core processor and 32GB of DDR4 RAM. It doesn’t have a discrete graphics card like the ZBook x2, but it does have integrated graphics processing with the Intel HD Graphics 620. Although the screen is similar in size to that of the ZBook x2, it’s only in HD resolution at 1920 by 1080. A similarly equipped ZBook x2 runs around 3,700 dollars. However, it has a Nvidia Quadro M620 discrete graphics card and a UHD resolution screen.

Next up is the Microsoft Surface Pro for 2,200 dollars. Again, like the ThinkPad, the Surface Pro is not available with a quad core processor. Instead it has a 2.5 GHz Intel Core i7 dual-core processor and 16GB of RAM. The Surface Pro also offers integrated graphics with the Intel Iris Plus Graphics 640. The screen is smaller at 12.3 inches with a lower resolution of 2736 x 1824. A similarly equipped ZBook x2 costs 3,200 dollars. For the money, you get discrete graphics and a UHD resolution screen.

Last up is the most expensive: the Wacom 15.6 inch MobileStudio Pro 16 Graphics Tablet for 3,000 dollars. It isn’t offered with a quad core, but has a 3.3 GHz Intel Core i7 dual-core processor. It can only be equipped with up to 16GB or RAM, but has a discrete GPU — the Nvidia Quadro M1000M with 4GB of VRAM. That’s two more gigabytes than in the ZBook x2. The screen is larger at 15.6 inches but matches the ZBook x2 with UHD 4K resolution. A similarly built ZBook x2 would run around 3,370 dollars.

The HP ZBook x2 is a very unique product and will attract a unique user. Every aspect of the ZBook x2 is innovative and remarkably capable. Is the form factor for everyone? No. Some won’t take advantage of the form factor enough to pay the added cost for it. However, the ZBook x2 surprised us with how capable it is as a video editing system. Its PCMARK score was good, and it kept its own against more familiar form factors. If you need a great looking, high resolution pen-enabled workstation, there is only one place to look: the HP ZBook x2.

The HP ZBook x2 is a powerful tablet with some fun party tricks. If you are a content creator on the go in need of flexibility, you should consider the ZBook x2.