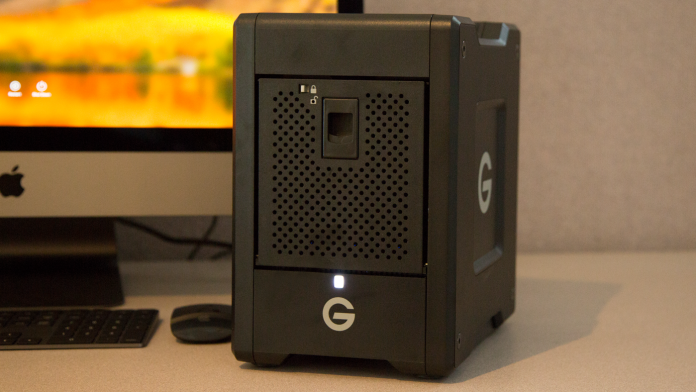 The G-Technology G-SPEED Shuttle with Thunderbolt 3 is fast, stout, and highly configurable, but it all comes at a price. The Shuttle is the little brother to the Shuttle XL, with the big difference being the number of drive bays. The Shuttle has four bays instead of eight. The Shuttle can be configured from 16 Terabytes (TB) all the way up to 48TB. It comes pre-configured in RAID 5 in HFS+ for MacOS 10.12+ systems and will require being formatted to exFAT or NTFS for use with a PC.

For this review, we’ll be looking at the 24TB version of the Shuttle, loaded with four enterprise class 6TB HGST Ultrastar 7K6000 7200rpm HDD drives. With two Thunderbolt 3 (T3) ports, it can be daisy chained to up to five additional T3 machines. It can be configured in RAID 0, 1, 5, 6 and 10. There is even an option for a two bay version with two EV bay adaptors. With those adapters, you’re able to offload, backup and save content using EV Series drives or readers like the Red mini mag reader, CFast 2.0 reader and Atomos SSD reader.

G-Technology says it has up to 1000 Megabytes per second (MB/s) transfer speeds and we saw that and some with an average of 1028MB/s in RAID 0 formatted in HFS+. See our tests below for speeds for every RAID and format configuration. The Shuttle has a hardware RAID controller and is capable being configured with 4TB, 6TB, 8TB and 12TB drives, or with two 10 or 12TB drives and two EV bays .

Connecting the drive for the first time was simple. After downloading the most up to date drivers and installing G-Technology’s Shuttle Utility from their website, we were off and running. We tested setting it up on two different systems, a 15-inch MacBook Pro with Touchbar and 27-inch iMac with Retina 5K Display. Neither system had any issues. If you come across any problems during the initial setup, one of the first places to look for any issues is antivirus software. Because they want to keep your system safe, they can block access to the drive.

We tested the Shuttle in every RAID configuration formatted in both exFAT and HFS+ using both AJA System Test Lite and Blackmagic Design Disk Speed Test. Since these tests can sway up to 50MB/s, depending on the size of the data sent to them and what program is testing their speed, we tested each set-up three times with each program and then averaged the numbers.

From the factory, the Shuttle comes pre-configured in RAID 5 formatted in HFS+. We started the tests as it came to us. For the rest of our tests, we configured them as needed. Factory formatted saw a read speed of 553 MB/s and a write speed of 765 MB/s. RAID 5 in HFS+ gets the best performance with redundancy from the Shuttle. If you have a PC, formatting in exFAT does not significantly hinder the performance with a read speed of 551 MB/s and write speed of 761 MB/s. If you want fast, but want to make sure you have a safety net under your data, RAID 5 is your best choice.

If you want fast, but want to make sure you have a safety net under your data, RAID 5 is your best choice.

Using the Shuttle Utility, it was easy to set up the array in the RAID configuration of our choice. Going further, we removed each drive to verify how easy it was to remove and replace. Removing the drives is simple, replacing them is a bit trickier, though not difficult. It just requires more finesse than removing them. To test if the drives are hot swappable, we removed one drive while on. Each drive has a blue light indicating everything is ok. Once removed and replaced, the indicator light for that drive went red. The array was then indicated as degraded. Following this test, we reached out to G-Technology and they confirmed that the Shuttle is not hot swappable.

To evaluate the value of the Shuttle, we’re going to look into the marketplace at two other options, the OWC Thunderbay 4 RAID T3 and the AkiTio Thunder3 Quad X 4-Bay Thunderbolt 3 RAID Array Enclosure. The OWC Thunderbay is a turn-key option, loaded with drives and is ready to use right out of the box. The AkiTio on the other hand is an enclosure where you will need to purchase drives separately.

Starting with the OWC ThunderBay 4 RAID T3. When configured as the unit we reviewed at 24TB, it costs less than the Shuttle by around 1,000 dollars at 1,250 bucks. There are a few key aspects of the OWC that make it a different animal than the G-Tech. First off, the ThunderBay 4 isn’t a portable option. Although you can move it around, its form factor is better off staying in one place. The Shuttle is enclosed in a rugged case and has handles for easy portability. The next noteworthy difference is that the OWC has a software RAID controller over the hardware RAID controller in the Shuttle. When looking at the pros and cons of software versus hardware RAID, there is only one major pro for software — it’s much cheaper. Outside of the cost, hardware RAID controllers are much more preferable. With a hardware controller, unless the hardware fails, the controller wont be the source of a failure. However with a software RAID, errors are more prevalent. Both systems have enterprise class 7200 rpm drives, however the OWC is loaded with Seagate drives and the G-Technology has HGST drives. Drives alone, there is a 40 dollar difference per drive, adding to the better cost of the OWC. Both are Thunderbolt 3 and support multiple RAID configurations.

The AkiTio Thunder3 Quad X 4-Bay Thunderbolt 3 RAID Array Enclosure costs 370 dollars. But, remember that it comes completely empty for that price. For a better apples to apples comparison, it can be loaded with the same HGST drives as the Shuttle for 1,320 dollars. That gives us a grand total of 1,690 dollars with drives. That’s a great value. Unlike the OWC, the AkiTio is designed with transport in mind. It has handles, but the housing isn’t as rugged as the Shuttle’s. The biggest value for the AkiTio comes from having a software RAID. Because you have to configure the AkiTio, you can use an open source software RAID, giving a bit more flexibility if any issues arise from the software. Still, it’s not as reliable as a hardware RAID. Both the Shuttle and the Thunder3 Quad X have four bays and dual Thunderbolt 3 ports.

The deciding factor when choosing between the OWC, AkiTio and the G-Technology will be whether you need the system to be portable and if you require the dependability a hardware RAID controller offers over a software RAID. It’s easy to get lost in the cost of each product, losing touch with what you need to achieve with your storage system.

The G-Technology G-SPEED Shuttle is a smaller and cuter version of the Shuttle XL. The cost of the Shuttle is high, but it offers a great product for the price. The benefit from a hardware RAID cannot be understated, but it will cost you. The transfer speeds were good enough to work off of regardless of the type of footage you are working with. If you need large storage with redundancy, want it portable, and need dependency, you should strongly consider the Shuttle.

The G-Technology G-SPEED Shuttle with Thunderbolt 3 is fast, stout, and highly configurable, but it all comes at a price. 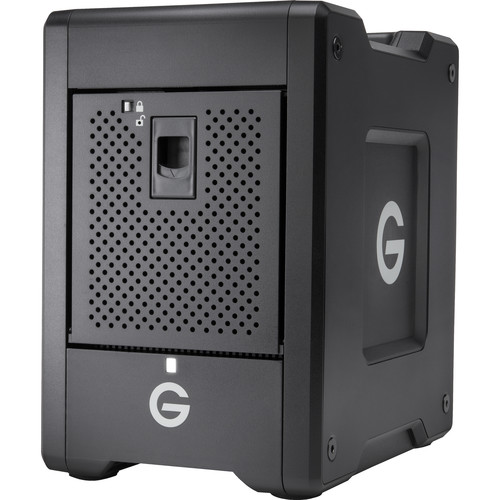 Chris Monlux wears a baseball hat most of the time, unless he’s going to be on camera. He is also Videomaker’s Multimedia Editor.