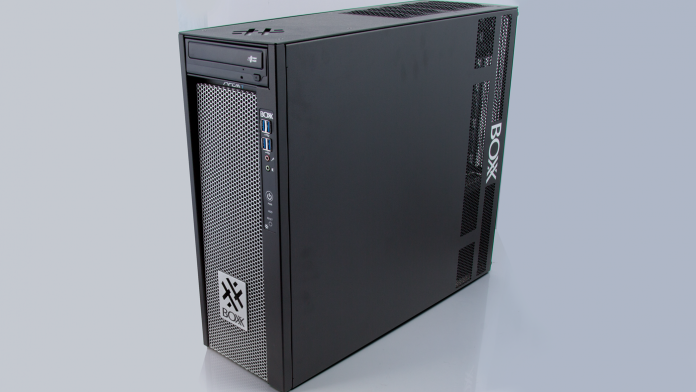 There are about a million ways to configure an editing system. On top of that, you have the option to build your own, have one custom made, or to buy one off the shelf. Building a system from parts can mean running into compatibility issues and buying a system off the shelf may put resources where you don’t need them. That leaves the option of getting a custom system built. In this situation, you should be able to address your personal use needs, but the system will likely come with the largest price tag.

You can expect every major manufacturer to offer a customizable system, so how do you choose? Many would start with budget, but custom systems can be built to fit just about any budget. This is where Boxx comes in, they consider themselves a different system builder. Starting with their in-house designed, American metal chassis designed to optimize the hardware inside them, they use only enterprise class components and customized BIOS. Their machines have even been factory overclocked; Boxx has been shipping overclocked systems since 2008. Lastly, they offer a three-year warranty that can even include next business day onsite repair.

Boxx offers five different series of desktop workstations, starting with the Apexx 1 and going up to the Apexx 5. At each subsequent level, the systems offer greater buildability and increased size. We reviewed the Apexx 4 6201. The 6201 is just one of six different base configurations in the Apexx 4 line-up.

So, we know what you’re saying: $7,766 dollars should buy you a very capable system, and it absolutely did. However, this system is pretty remarkable even beyond what would be expected for the price. Once you crack the case open, the purpose-built design becomes apparent. This puppy is liquid cooled, and the fans are large allowing for slower rotation and making it very quiet. If your work doesn't require high resources, the system as configured would be overkill. This way is overbuilt for cuts and basic editing; however, if you do any compositing, motion graphics or high bitrate video, it will leave a smile on your face.

To give a baseline for the ability of this system outside of subjective descriptive words, we used PCMark 10 to test its overall ability and to see how it does specifically for digital content creation, photo and video editing, rendering and lastly visualization. The overall PCMark 10 score is 5,173 — not overwhelmingly great. Another system we’ve reviewed recently is the Acer Predator 17 X, a workstation laptop that costs $3,000 dollars, which achieved an overall score of 6,789. We would have hoped for better from the Boxx. However, when we look a bit deeper into the specific scorecards the Boxx becomes much more interesting. The overall digital content creation score is 8,731 over 6,834 from the Acer. Peeling back that score some more, the most impressive subcategory, rendering and visualization, scored a 14,959, whereas the Acer scored only a 8,364. Next is the photo editing score with 9,180 for the Boxx and 7,809 for the Acer. Lastly, they are almost identical in the video editing score with only a 40 point difference between the two: 4887 for the Boxx vs 4847 on the Acer.

PCMark 10 scores can be a bit difficult to unpack, however the scores do show that although the resources of the Boxx are much greater, this doesn’t mean the best performance all around. Boxx systems are designed with their purpose in mind, so their numbers kill in some categories and are just basic in others.

With the cost of the computer built for this review, you should have high expectations. That’s well enough, because not one thing we threw at it could stop it. We started testing its real world use with how well it handled footage from a plethora of cameras. This isn’t something that we expected it to have any issue with, and it absolutely did not. No matter what we did, from grading to editing and everything in between, no type of footage gave it any grief.

No matter what we did, from grading to editing and everything in between, no type of footage gave it any grief.

We then moved on to testing its ability to render a project that was mixed with multiple types of footage with different bitrates, bit depths and formats. The project contained unrendered motion graphics with tracked motion, stabilized footage and heavy compositing. The project sprang open, was immediately available to scrub through, manipulate and edit. When rendering the project, we didn't see a large improvement over render times from the fully spec’d out 2015 Mac Pro we used for the project originally. With that said, every other aspect of the project functioned better and unlike the Mac Pro, there was no lag to do anything with in Premiere Pro CC17 or After Effects CC17. We didn't find anything that could slow this system down.

The marketplace for desktop workstations is quite extensive, but doing a build that is identical to the Boxx isn’t possible. There are no configurations are currently available with the same CPU and GPU, so we got as close as possible. We configured a Dell, HP and Apple to as close to the specs as we could to the Boxx Apexx 4 6201. Let’s take a look at how they stack up.

First, let’s look at the Dell Precision 7820 tower. Similarly configured, it costs around $8,464 dollars. The configuration would consist of Xeon E5-2640 v4 processor, 64GB of DDR4 ram, two 512 PCIe SSDs and two NVIDIA Quadro M4000 GPUs. The CPU only has six cores and the M4000’s are significantly underpowered to the Boxx’s GeForce GTX 1080 Tis, but step up to the M5000 and the price jumps even higher. HP always has an MSRP and a sale price on their website for their systems. Depending on the day, the $8,400 dollar system could cost you around $6,200 dollars.

Up next is the new HP Precision 7820 Tower for $8,464 dollars. Unlike the Boxx, the HP and Dell are configured exactly the same. Additionally, Dell also offers a sale price on their machine, also bringing the price to around $6,200 dollars.

Last up is the Apple Mac Pro for $7,000 dollars. Apple doesn't offer NVIDIA GPUs and configuration is more limited than HP, Dell and Boxx. This machine would also have 64GB of memory, but it would be DDR3. The CPU is a bit more beefy with 12 cores, but overall, the system (because it’s the oldest we are considering) is a bit outdated. At the highest price (because Apple is never on sale) this is the worst value.

Boxx sent us a machine that should conquer all that you throw at it. Its resources would be wasted however on those that don't have a resource heavy workload. This machine is impressive and every aspect of it has been optimized for its specific purpose of media creation. Its value when compared to others in the marketplace is similar, but we feel because it's more focused on media creation, it would be a better fit for most users.

The Boxx Apexx 4 can be configured ten different ways to Sunday. Boxx prides themselves in custom machines that are purpose-built for the jobs they do. We are impressed with its capabilities, but its performance could be more than some might need.

Chris Monlux is both a daily PC and Mac user. He is also Videomaker’s Multimedia Editor.