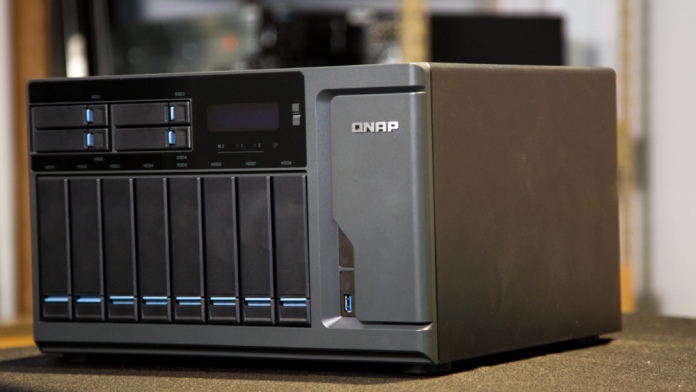 As content creators, every new project creates more data we must store, archive and manage. Depending on the value of that data, having a dependable and thought out data management system is a must. Consider how many resources you put into capturing even one minute of completed work. Outside the final product, all of the elements that make up that product took time to capture. Plus, add in the time you put in to earn the money you used to buy the equipment used to capture the elements in that completed video. All that time, money and resources are wasted if your data becomes lost or corrupt. That’s a lot to worry about isn’t it? Compound that with project after project and you have a high volume of valuable data.

Having a flexible, capable and large storage solution for your workflow is a must, however it’s not the easiest thing to throw money at. The QNAP TVS-1282T3 is feature-rich and relatively affordable. The TVS-1282T3 is network-attached storage, or NAS, with 12 bays you can fill with four SSDs and eight HHDs. The NAS is sold empty, but our review unit came loaded with four 500 gigabyte (GB) WD Blue SSDs and four 6 terabyte (TB) WD Red HDDs. It also has two M.2 SATA III slots and comes with an up to 3.6 gigahertz (GHz) Intel core i7-7700 quad-core processor. It comes with 64 gigabytes (GB) of 2133 MHz DDR4 RAM, two 10GbE and four gigabit ethernet ports. It supports RAID 0, 1, 5, 6, 10, + Hot Spare and JBOD, and it offers up to 1600 megabyte-per-second(MB/s) file transfer speeds. The drive trays are removable without a tool, and support SATA M.2 SSDs with 2242, 2260, 2280, and 22110 form factors. More exciting are the four Thunderbolt 3 ports with up to 40 gigabits per second bandwidth that can connect four iOS and Windows machines. Lastly, it has three HDMI ports and two built-in speakers that talk to you with verbal system warnings.

The great thing about a NAS is that once you’re set-up, you can just let it be. This is what we have to remind ourselves of as we set-up products like this. It’s not a quick plug and play situation. However, that’s not saying it’s difficult; it just has its steps. Plus, we’re setting it up intending to use all of the features, which may take longer than a typical setup. We configured the system plugged into an Apple MacBook Pro with touchbar. We also connected it to a Mac Pro with Thunderbolt 2 and an Apple T3 to T2 adapter. We installed the required Qfinder Pro app on both systems and began configuration.

Configuration is pretty straightforward, and we’d expect that most would be able to set it up with no problem. Once configured we were able to use the web interface for all other setup requirements.

Once we were ready to use the system, we noticed that the drive in HDD bay number three wasn’t showing up as having a drive in it, even though it did. To verify where the problem originated, we put the drive from number bay three into number five. The drive was recognized, pointing to bay three as the problem. With that identified, we attempted to install a drive into bay three again, and this time, we were able to get it to recognize, after a bit of finagling. In our experience, we discovered the drives can be inserted improperly fairly easy. When we spoke to QNAP about this issue, they stated that this was not a typical experience and that they would remedy the problem for any customer who experiences it.

The NAS is unique because it's capable of using both SSDs and HDDs.

The NAS is unique because it's capable of using both SSDs and HDDs. We formatted the drives into all the RAID configurations. Outside of waiting for the RAID to configure, the process was simple. When in each RAID, we tested their data transfer speeds using AJA System Test Lite. On top of that, we tested each RAID with Thunderbolt 3, 2 and gigabit ethernet connections. The obvious fastest way to pass data is Thunderbolt 3. We experienced speeds up to 1516 MB/s write and 1415 MB/s read. 10GbE offers transfer speeds to up to 1200 MB/s — that's nothing to scoff at, but if you have Thunderbolt 3, it’s faster and doesn't require a costly infrastructure improvement. The next fastest was when connected via both Thunderbolt 2 and gigabit where we saw speeds up to 898 MB/s write and 956 MB/s read. Lastly, the slowest performance came from Thunderbolt 2 alone with 292 MB/s write and 935 MB/s read speeds. The expectations for the RAID speeds follows standard convention for RAID speeds. RAID 0 was fastest read and write, then 5, then 6 and lastly 10.

Users will experience limited bandwidth when connected to multiple computers via Thunderbolt. We saw relative slowdowns the more connected systems we had drawing from the shared resources of the NAS. Having the ability to connect up to four systems, all accessing the same data at the same time is pretty incredible. This could be the hub of a small production crew. Keep in mind that Thunderbolt 3 lengths over 2 meters and has a much lower data transfer rate than those under.

This system offers a few fun, and possibly useful party tricks on top of being a typical NAS. It has the ability to set up a watch folder to create different resolution copies of a video. It can be an iTunes server and offers Netbak replicator. A Netbak replicator is a  real-time synchronization, scheduled and auto backup of data from multiple Windows PCs. Lastly, it has T2E connectivity that allows computers without ethernet ports to access 10GbE network resources over a Thunderbolt connection.

The QNAP TVS-1282T3 offers a ton of configurations, features and has some impressive data transfer rates. More than just a RAID, this NAS could be the cornerstone of your production workflow. We liked how many different ways you could connect to it, and it impressed us with some fun features that, to the right user, will be immensely useful.

The QNAP TVS-1282T3 has many connection capabilities. It can hold many drives and can be a safe place to store your data. It has some fun features and isn’t hard to set up, but the process does take some time.