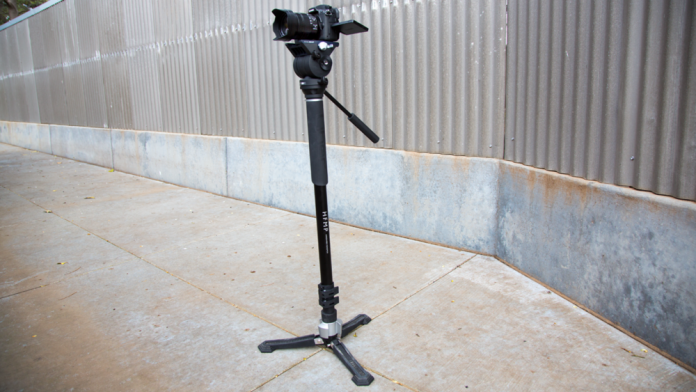 Worse yet, you actually use your heavy tripod, but once editing begins, you wish you had more dynamic shots than the locked down shots you got. There are many ways to get around the tripod blues. It’s easy; just get some other type of support.

You could get a rig, making your camera better equipped for steady handheld shots. You could get a slider to add in a bit more dynamics. But sometimes the best choice is the easiest one: a monopod. Monopods help you keep away the shakes from your handheld footage through stability of your Y-axis. They are easy to transport, and if you have a fluid head, you can even achieve jib-like shots.

Libec is onto something with the Hands-Free Monopod, or HFMP. It’s a lightweight, easy to operate monopod that can stand on its own. The HFMP has three feet that can lock a small lightweight camera up, without leaning or being propped up by anything. We’ve found that using monopods while on the go is the easiest way to get better footage. Plus, with the HFMP, you can get a rest from holding up the camera during a long day of shooting.

The HFMP has hands-free in the name, but to operate it, you’ll still need to use your hands. We get the spirit of the name, but we think it’s a bit funny that something labeled hands-free requires hands — at least sometimes. The HFMP has a maximum height of 69.3 inches. That’s almost 6 feet— add the TH-X pan and tilt video head and it towers over 6 feet. The hands-free name comes from two parts. The first is that it stands on its own. The idea is that you shouldn't need to keep one hand on it at all times. We feel it’s a bad idea to leave equipment without at least one hand on it, because it can get bumped over.

The second part of hands-free is that you can engage and disengage the swivel lock on the base with your foot. This lets the monopod pivot and allows for up to 20 degrees of tilt. It stays unlocked until the foot lock is reengaged. The feet can be folded up, as well. We were able to do that hands free, but it would be easier to use your hands. You’ll need your hands to extend the three sections via two section flip locks. The monopod is made from an aluminum-alloy and comes with a carrying bag. The HFMP alone has a load capacity of 17.6 pounds, however if the TH-X head is attached it is lowered to nine pounds.

The day that the HFMP arrived, so did another product we were excited to use: the Panasonic LUMIX GH5. We took them both out and discovered that the HFMP and TH-X head are a great combo and a good fit for the size of the GH5.

When a camera is left alone on the monopod, there is a little bit of rocking. If you were shooting an interview with the HFMP you might see that rocking, though it’s not distracting. That said, we didn’t feel the need to collapse the feet at any time. We think this is more of a storage and shipping feature — not too usable when shooting. When the swivel is unlocked, the monopod feels very nimble and is easy to shoot with. However, we did experience times when we would have liked more than just 20 degrees of pivot.

When we first extended the monopod to its fullest height, we were amazed how tall it was. When shooting at that high (depending on your height) it can be hard to compose a shot and achieve a sharp focus. Even at 6 foot 3 inches, I found myself on my tippy toes just to view the monitor to be able to compose and focus the shot. The height is perfect for run and gun shooting, however. You never know when it will be helpful to have a camera on the end of a 6 foot poll.

When we first extended the monopod to its fullest height, we were amazed how tall it was.

We decided that it would require multiple types of shoots to get the overall feel for the HFMP’s usefulness over other monopods. When conducting an interview, our assumptions that it would be stable enough proved well founded. Even when shooting with a larger camera like the Canon C300 Mark II, it felt good. With the GH5 mounted on it, the monopod was hardly any heavier than without.

If we have one gripe with the HFMP, it would be that it doesn't collapse into a small enough package. We would have liked to see one more stage, so that we could collapse it into something easier to attach to a backpack. Eac time we used it, we found ourselves in a situation where having the capability to shoot lower or collapse it more would have made our shoot better and easier to achieve.

There are many monopods in the marketplace, but only a few are free-standing like the Libec HFMP. The best apples to apples comparison is the Manfrotto XPRO Monopod, so let’s talk about each of them and how they compare to each other in both options and value.

The XPro Monopod has a few differences from the HFMP; the first is that it’s much taller, at 79.9 inches. However, it only collapses to a length that is 4 inches shorter than the fully collapsed HFMP. The Manfrotto has a larger load capacity by two pounds. The feet on the Libec are much larger and the locking mechanism is much more positive than the Manfrotto as it has an auto lock. Lastly, the HFMP is $40 less–coming in at $260 than the XPro (which is at $300).

The Libec HFMP is a great monopod with some really useful features. Although it's not really hands-free all of the time, it lives up to its name with useful capabilities. We love that it can stand on its own and the locking mechanism makes the user know its locked. It is certainly tall enough for most uses. Overall, we enjoyed using it and it's a good price. If you’re in the market for a flexible monopod, the HFMP from Libec is a good choice.

The Libec Hands-Free Monopod, or HFMP, can stand on its own. It has lockable feet that can either stand straight, or pivot up to 20 degrees. It costs $260 and is a bit cheaper than its competition. We would have liked to see it collapse into a smaller form, but overall, the Libec HFMP is a good monopod.