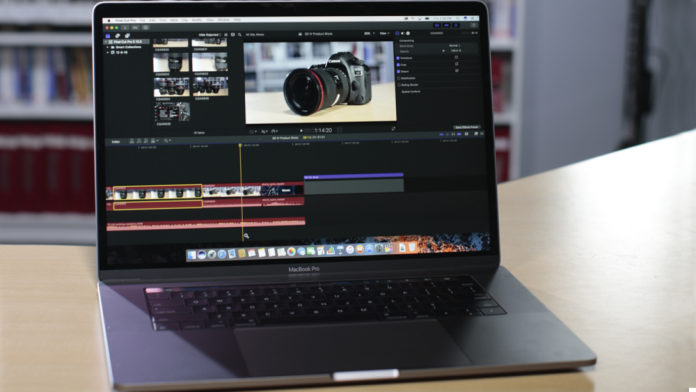 Apple has a lot to live up to. How will they fare when you compare any new product to their past successes? Enter the new MacBook Pro and the Touch Bar.

The Unit in Question

Apple set us up with a very beefy machine to review. The stats are just about topped out. Weighing just four pounds and at a tiny 15.5mm, it’s light and thin. Our first thought was that weight and size should equal shorter battery life, but Apple promises up to 10 hours of use per charge.

With a Radeon Pro discrete GPU and 4GB of embedded DRAM teamed up with a bright 500 nit monitor, it produces 25% more colors than standard RGB with P3 color. This Macbook Pro can also support up to two 5K displays. The trackpad is now much larger than its predecessor, but one of the biggest changes is the four Thunderbolt 3 USB-C ports that can charge and power from any port and offer a up to 40 Gbps data transfer. Last but not least is Apple’s newest feature, the Touch Bar.

The Touch Bar replaces the function keys on the top of the keyboard. What it controls changes based on what you’re doing and what application you’re in. It can do simple things like change the volume and brightness, add an emoji to a message or offer predictive text to select from. You can log-in, and buy things by using the Touch ID from Touch Bar. But it’s more than those novelties. Depending on the app you’re in, it can be customized to your needs. A bit more functional than just being virtual buttons, in Final Cut Pro X 10.3 it can be a touch representation of the timeline, allowing you to navigate through your project.

An Apple feature that can be customized — what gives? Well, the Touch Bar can really only be customized to a point; all customization is from a finite number of options, and you cannot stray from those choices. For instance, one option is to make the typical tools in FCPX available so you can just tap to change from the arrow tool to the blade. You choose which tools appear from a limited list of options, but some of the defaults can’t be changed.

There is only one question with the Touch Bar: Why do you need it? If Apple had added a touch screen, which is common in today’s laptop computers, it could do all of the functions of the Touch Bar and much more. We would love to see the power of this computer with the interactivity of an iPad while retaining the keyboard and trackpad. With that said, the Touch Bar is helpful and fun.

Normally when we do a heads up comparison we are putting two different products up against each other. In this case, however, we happened to have the 2015 MacBook Pro in-house, which, just like the new 2016 model, is fully spec'd out. We thought it would be interesting how the newest and last MacBook Pro would perform against each other. Keep in mind, these are high-end results. How it’s configured may change your results dramatically.

There are a lot of different functions we could test on each of these computers, but we thought we would see how they performed for editing. We tested two different editing programs for this evaluation. The first is the newest release of Final Cut Pro X 10.3, and the other is Adobe Premiere Pro CC 2017. Here’s what we found.

With both computers running simultaneously, we saw a 23% faster encode time on the 2016 model. That’s not overly significant on a small scale, but if you look at an encode  that normally would take you eight hours, it now takes just over six. That might not be a huge thing because FCPX will allow you to continue to work as it renders, but imagine what you could accomplish in two hours.

When we loaded a similar project into Premiere Pro CC 2017 exported using media encoder, we saw a 32% faster encode time over the 2015 Macbook Pro. That was mirrored by a direct render out of Premiere Pro CC. On a side note, when using Premiere Pro we were disappointed that we were not able to use Touch Bar. We anticipate Adobe will include Touch Bar features in a future update.

With the changes to this release of the MacBook Pro, none is more noticeable than the four Thunderbolt 3 ports, two on each side. This feature means that the computer can be charged from either side. The ports can also be used for DisplayPort, Thunderbolt and USB 3.1 Gen 2.

This was the biggest part of the computer that constantly challenged us. We moved data to the computer from our main editing system using a 2TB Samsung T3 SSD with a USB 3.1 Gen 1 connection. Up till now, we have used a cable with a USB 3 conversion to connect to our other systems. This was super handy and worked fine. However, every time we went back and forth to move other data to the new Macbook Pro, we needed to swap out cables. If this was part of our normal workflow, a lot of time would be wasted looking for the cable and replacing it. Outside of the T3, we don't have any USB 3.1 products and no USB-C or Thunderbolt 3 products. Because of that, this computer was a bit more forward thinking than we were ready for. You might need a dock solution if you aren’t ready to upgrade to using only USB 3.1 accessories.

One of those solutions is the OWC Thunderbolt 3 Dock for $280. It has two Thunderbolt 3 ports, one mini DisplayPort, four USB 3.1 Gen 1 Standard-A ports, one gigabit ethernet port, one S/PDIF digital audio port (output only), one SD 3.0 media card reader, one Hybrid 3.5 mm headphone / mic jack and one FireWire 800 port. It’s not yet available and we have not evaluated it. Keep in mind that if you need one of these, that you will need to add almost $300 to your budget.

There has been a bit of an outcry about the MacBook Pro’s price. The cheapest configuration you can buy that includes the Touch Bar is the 13-inch model for $1,800. The computer we reviewed is $3,500 and could be upgraded to cost as much as $4,300. There has always been a premium when buying Apple, but with this release, its top cost of $4,300 versus $3,450 for the last MacBook Pro released, Apple is gold plating that premium.

The big question is if Apple is overvaluing this new computer at $850 more than its predecessor. For our use, let's take the data we have accumulated for the purpose of working with video. The increase in price is almost 25% more. If you are a FCPX user, you get 23% faster render speeds, so you pay for what you get there. A Premier Pro CC user, there is even more value with a 32% increase in performance. But that's just judging the processing power during export or render. Regardless, we’ve come to expect performance improvements each year without price increases.

The Touch Bar is pretty sleek; it’s more useful than it seems but doesn't work with non-Apple applications.

This MacBook Pro is expensive, but it's also beautiful and fast. You will pay a premium for this computer. It worked great in FCPX and Premiere, and the Touch Bar is a welcomed addition. We’re still puzzled why they didn’t jump to a touch screen and forgo this step — but alas, that's just dreaming. Even if you’re used to buying Apple products, its price tag may surprise you, and if you’re used to PC prices, your jaw might drop. It has good improvements, and for at least 6 months, you’ll be the envy of your friends with the prettiest computer in Starbucks.

The new 2016 Macbook Pro with Touch Bar offers 23% faster rendering in FCPX 10.3 than the last MacBook Pro and brings useful Touch Bar functions to Apple applications. While the expense and limited connectivity may be a deterrent for some, the value is consistent with other Apple products and we we’re impressed with it’s performance.

Chris Monlux is lucky to do what he does, because he would be talking about gear anyways. He is also Videomaker’s Multimedia Editor.