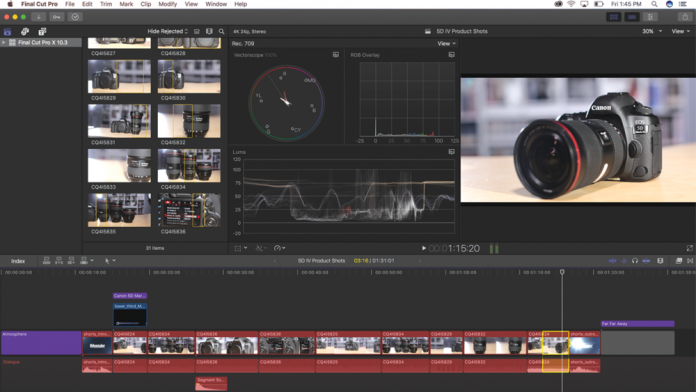 Apple, over the last five years, has slowly pulled itself out of the hole dug by the original release of FCPX. For many video professionals, it was too big a change, causing them to leave Final Cut Pro for another editor. However, those that stayed seem to be true believers of its original intent — to be a game changer. Now, maybe you disagree; that’s fine. But for some, when they left it behind, it wasn’t because the program was bad but because they chose not to learn a new way to edit.

Those still around have accepted that it’s a different kind of tool that has just as many strengths as other powerful editors but works in a different way. With that said, Final Cut Pro X has changed alot since its launch, and it isn’t as drastically different from other editors as it originally was. With the release of 10.3, Apple continues to improve FCPX while still keeping the contrast it has with its competition.

Launched on October 27, 2016, 10.3’s new features and updates were many but not very drastic. That should please those who already use FCPX and help those who are looking for an editing program. The other main editing programs competing with FCPX are Adobe Premiere Pro CC, Magix Vegas Pro and Avid Media Composer, and because of FCPX’s low price, it’s also in competition with more affordable options such as Pinnacle Studio.

The new update offers a new, redesigned interface with options to configure a custom workspace and fill a second display with the timeline or hide it completely. The magnetic timeline has also seen some modifications, like the ability to color code roles for organization, and within the Index, you can now drag and drop audio roles, highlight them and collapse others. Our favorite new timeline update is that you can now add audio effects and keyframe volume to an entire role within a compound clip.

Our favorite new timeline update is that you can now add audio effects and keyframe volume to an entire role within a compound clip.

The color has been updated to what they’re calling Wide Color, meaning that instead of the typical RGB color space, the program now offers P3 color touting 25% more color than RGB. FCPX is now able to import, edit and deliver video in standards Rec. 601 and Rec. 709 or in Rec. 2020. Plus, if you need to worry about broadcast safe video levels, there is now an effect to apply for those same color spaces.

Final Cut can also manipulate many camera’s LOG footage in real time, all while preserving their Wide Color. Our favorite color-related update is that the video scopes now display Wide Color in real time, allowing you to make color adjustments more quickly.

Lastly, let’s look at some more general changes included in Final Cut Pro X 10.3 update. First, instead of having to re-link each file one at a time, a batch re-link can now be made from RED .R3D files to QuickTime proxy files. Plus, keyboard shortcuts can be customized for adding audio fades.

The FCPX and the Touch Bar

We were excited to get to try out the Touch Bar on new MacBook Pro using FCPX. The Touch Bar replaces the function keys on the top of the keyboard with a touch bar that can be customized depending on what you are doing.
How the Touch Bar works with this update is both fun and helpful. It can do things like executing common functions such as volume control, fade in and out and media import, and it gives you easier access to advanced editing commands like trim to start or trim to end. The best looking option and a very useful tool is the ability to view your project at a glance and navigate in the timeline all using just the Touch Bar.

Is the Touch Bar function in FCPX worth buying a new computer? No, but if you need a new computer and you get the new MacBook Pro, you will benefit from its usefulness.

We had lots of time with the prior release of Final Cut Pro X, version 10.2, and although there are some good and needed updates in 10.3, they aren’t revolutionary. Still, they can be felt. It’s not going to change your workflow much, if at all, but the update does improve things that were weak before.

The first thing we noticed is the interface is now more contemporary and flat. Apple moved a few buttons around and put them near other tools for better access and workflow. A good example of this where they moved the titles and generators button. It has been moved up to the top left near the library sidebar, leaving the bottom left, where it once was, for effects and transitions. Another button they moved is the one to show the background tasks. It now has been relocated to the top, just above the new location for the titles and generators button. In 10.2 it was located in the middle of the screen near timecode.

If you have used FCPX before, it will quickly become apparent to you that the change in experience is subtle. The program should still feel familiar; the transition from 10.2 to 10.3 won’t be a harsh one. Our best advice is to look into where your most used buttons have been relocated, and you should be ready to fly.

The marketplace is full of a large selection of editors, plus, there are a few different pricing models you should be aware of, from leasing programs by paying a lower monthly cost to, like in the case of this product, buying it outright and getting the updates for free. Apple has made Final Cut Pro X very affordable at $300. Because of that low price, we feel it’s the best bang for your buck when it comes to professional editing programs.

Adobe Premiere Pro CC is leased for $20 a month. After 15 months, you will have paid what Final Cut costs and still have no ownership over the product. The argument for Premiere Pro CC is that because you are leasing it, you can come and go as you please. Pay one month, leave for a month, then pick it back up at a later date. However, that comes with a greater monthly cost of $30 a month. That gives you a limited 10 months of use before equaling Final Cut’s price. The best deal for Adobe’s Creative Cloud is when you get all of their applications for $600 a year, paid up-front. If you are going to use any other products in Adobe CC, the value scale tips toward Adobe’s offering.

Other programs, like Avid Media Composer, can be bought or leased, but each for more money than the offerings from Adobe or Apple. It costs $50 per month or $1,300 for Media Composer. Magix Vegas Pro 14 starts at $400. Pinnacle Studio is the most affordable at just $60 scaling up to $130. The price rage of $60-$130 is very appealing, and we feel it’s a fine program, but isn’t nearly the editor that Final Cut Pro X 10.3 is.

If you abandoned Final Cut Pro after version FPCX was launched, you might never come back to it. However, you may be overlooking the benefits it offers. From its affordability to its capability, Apple has given more value than they charge for with FCPX— and that’s rare for Apple. Is Final Cut Pro a perfect program? No, but it’s very good at what it does and works great. If you use an Apple computer, are looking for new video editing software and want to keep your costs down, we recommend Final Cut Pro X 10.3.