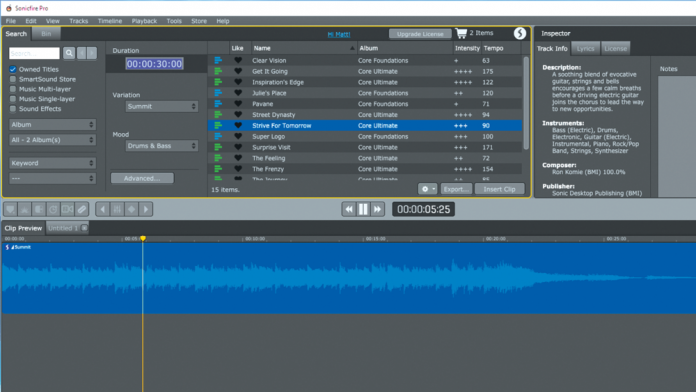 However, most of us are missing either the resources or ability to add customized scoring to our projects. In those cases, you’ll need to look at licensing music. Smartsound Sonicfire Pro 6 was designed to bridge the gap between buying music out of a box and having it specially produced for you.

Sonicfire 6 set out to be soundtrack creation for professional videographers and media creators. In version 6, Sonicfire has added a new interface, a new cut-video-to-music feature and has done a major update to its timing control capabilities.

Sonicfire 6 allows you to customize the duration of songs from its library. Gain track timing control while automated mixing gives you the ability to have alternate arrangements for each song. Sonicfire also offers, via its Smartsound Plug-ins, platform support for Adobe CC, Final Cut Pro X, Sony Vegas Pro & Avid Media Composer. Included with the software are 10 royalty-free songs from the album called Core Ultimate. The software is compatible with Windows 7, 8 and 10 as well as Apple OS X 9.5 and later.

We installed Sonicfire Pro 6 on a PC running Windows 10. Installation was easy and uneventful. Although Sonicfire 6  wasn't immediately intuitive, after a bit of poking around and trying out each feature we came across, we saw that it could be a time-saving tool.

Although Sonicfire 6  wasn't immediately intuitive, after a bit of poking around and trying out each feature we came across, we saw that it could be a time-saving tool.

We started by looking for a song for a sequence that had already been edited to test out the tap tempo feature. Sonicfire found all of the songs that were in our tempo range — around 94 bpm.

The first thing we wanted to play with was manipulating the duration of our selected track. We told Sonicfire how long the song should be and it worked to make it that length.

Depending on the length you choose, some songs will just get an extra few seconds added to meet your duration requirements. We choose 34 seconds as the length we needed. The song came out to 32 and had a note at the end that was held on then faded out slowly for those extra two seconds we needed. However, when changing it just one second more to 35 seconds, the cut didn't change. Sonicfire will add a longer fade or just add silence to the end, depending on the song.

To be fair, it actually makes complete sense that tracks can't always meet an exact duration. When considering tempo and time signature, some songs will not divide equally into the desired length. Another thing to pay attention to is that, because Sonicfire is editing the song for you, sometimes the edits will be rough if you choose the wrong mix. It’s not bad, but you might hear the edit. You can mix and match different mood types to either cover the edit or change the dynamics of the song created. This is a small issue that will be more or less noticeable based on the track.

After selecting and editing our song, we needed to choose the song variation — each track has a few different renditions of the song. Then we moved on to choosing the mood, which defines what instrumentation is used in the mix of the song it creates.

However, the usefulness of this software will depend on what you’re trying to achieve, how difficult it is and how simply it can be done with Sonicfire 6. If you want a good production, you need the music and the music edit to match the quality of your visuals. Make sure you’re not settling for what’s easy here. The fact that it does it for you doesn't mean it’s the best fit — just the easiest. Make sure Sonicfire fits your workflow and needs before making it your default tool .

Already have your own royalty free music for your productions? If so, Sonicfire 6 isn’t for you — it only works with songs from its library. Tracks from Sonicfire 6 can be had for as little as $60 each, after the purchase of Sonicfire 6 for $200. If you want their whole library, which consists of 345 albums, you’ll need to shell out a bit over $8,000.

Sonicfire 6 takes a unique approach, but a large portion of what it offers is readily available elsewhere. A quick search on the web for royalty free production music will give you a slew of options. One example is Premiumbeat. Premiumbeat works by selling you several versions of a single song packaged together for $49. In the $49 package, you get the full song, 15, 30, 60 second versions and a loops set. They don’t do the editing for you, so Sonicfire 6 has a leg up, but the price is a bit cheaper. If you frequently need music that falls outside the 15, 30, 60 second formats, Sonicfire is the better choice. Otherwise, the cheaper solutions are more appealing.

Another idea on production music is paying a monthly charge for a full library from a provider like Megatrax.com. Their price varies depending on the amount of music you need access to and what you might use it for. If your production will be on TV and on the internet, you will pay a different price than if it will only appear on TV.

Of course, perhaps the ultimate consideration is the quality of music. We feel uncomfortable making such a subjective assessment, so we advise listening to audio samples from your target providers before committing to a stock music library.

If you frequently need music outside the 15, 30 and 60-second formats, Sonicfire 6 could be the solution you’re looking for. However, it isn’t going to be for everyone. This is true about most audio libraries: They’ll fit your needs some of the time, but sometimes they won't. Regardless, Sonicfire Pro 6 offers a unique and compelling approach to royalty-free music.

Chris Monlux feels that knowing how to play, read and write music has made him a better video producer. He is also Videomaker’s Multimedia Editor.