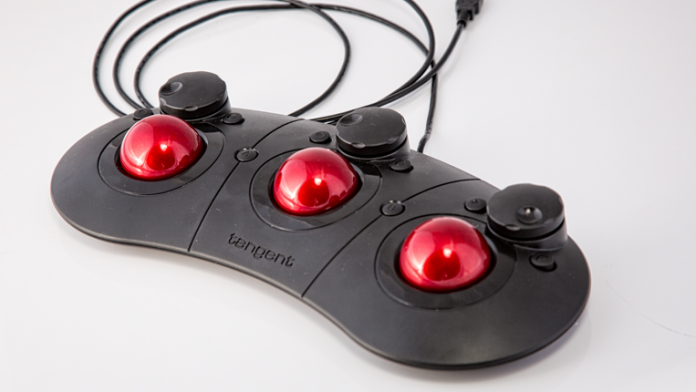 The Ripple is an input device for your computer made specifically for color correction. Each of the three trackballs controls one of your editing application’s three-way color wheels. The dials above them control each wheel’s corresponding luminance slider. The buttons do a number of other things, which we’ll get to shortly.

Like anything else, when doing repetitive work where time is money, professionals need every tool they can get their hands on to work faster. Using an input device like the Ripple allows you to manipulate multiple parameters simultaneously. For example, you could add blue to the shadows while you boost red in the highlights. If you can reduce the amount of time spent per shot by 10 seconds and you have 1,500 shots to correct — well, it adds up.

Tangent’s been making these types of input devices for years, but they’ve typically been strictly for pros. Aside from a tablet app, their next most affordable device is the Tangent Element, which retails for a bit over $1,100. With a $350 price tag, Ripple is the first input device for color grading from Tangent that’s truly accessible for enthusiasts and professionals alike.

Taking Ripple for a spin, it’s clear it’s not a $1,100 product. The body feels appropriately light-weight and plastic. It’s build has no effect on the usability, however. The grippy feet hold on to desk surfaces tightly. The dials turn with just the slightest bit of delightfully fluid resistance.

The layout of the control surface mirrors your editing application’s three-way color tool pretty closely. The three trackballs control the hue of the shadows, midtones and highlights, while the dials control the luminance of each. Next to each dial are reset ball and reset dial buttons. Between the trackballs are an A and B button, which serve different purposes, depending on your application.

The trackballs themselves are hefty. While at first we felt that the action wasn’t smooth enough, we soon came to appreciate the design. When we put our hands on them, we half-expected a near-frictionless metal ball bearing spin, but that’s not what we got. The Ripple uses plastic bearings, so the action of the trackballs feels like what it is: plastic on plastic. At least that’s what we thought.

It turns out, our initial feeling of mild disappointment was based primarily on the sound, not the feel. When we began color grading while listening to music, the plastic-on-plastic sound went away, along with the plastic feel. What we were left with was perfectly appropriate resistance. When making precise adjustments, the last thing we want is to lift our fingers and have the ball continue to spin. When working with Ripple, we never noticed that happening.

Speaking of color grading, we tested Ripple with DaVinci Resolve 12.5 and Premiere Pro CC 2015.3. Both software has benefits and drawbacks when working with Ripple. While these two applications are the only two natively supported by Ripple at the time of this writing, Tangent has supplied a work-around for other software, which you can read about on their support page.

Resolve has nice, big, high-resolution color wheels that worked great with Ripple. In Resolve, Ripple felt like an extension of our hands. However, the buttons cannot be remapped for Resolve using Ripple’s companion software, Tangent Mapper. Within Resolve itself, you can adjust the sensitivity, but that’s where customization ends. To make matters worse, one of Ripple’s eight buttons is completely unused in Resolve.

Premiere, on the other hand, features smaller, lower resolution color wheels which don’t feel nearly as precise, thus Ripple felt less precise. However, Premiere allows you to remap every button and dial using Tangent Mapper. Because of the nature of the color wheels, we felt it necessary to toggle between high and low sensitivity on the trackballs. Remapping the A button to toggle trackball sensitivity was extremely easy.

In the end, we felt that despite our dissatisfaction with Resolve’s handling of key-remapping, it was the software to use with Ripple. We acknowledge, however, that this assessment is subjective, so we can’t fully recommend one software over the other.

With both apps, we still had to use the keyboard and mouse while working. You can’t use Ripple to navigate the timeline or interface without giving up some of you precious few buttons. Frankly, we weren’t willing to sacrifice the bypass button, which allows for quick before/after comparisons, or any of the reset buttons to be able to jump forward on the timeline. What we were left with was a single button — not enough to handle timeline navigation

Tangent says Ripple is designed for “the occasional colourist, editor, and student.” It definitely fits that bill, though we suspect the real user-base will stretch beyond that. Ripple will certainly satisfy the frequent colorists on a tight budget and jack of all trades filmmakers who need the widest range of tools they can afford.

We see Ripple getting frequent use by event videographers, independent filmmakers, documentarians, and corporate and travel filmmakers. Others with less demanding color requirements may find the benefits Ripple provides to be unnecessary.

Ultimately, we were extremely happy with the results we achieved with Ripple. It’s true that we would have loved to have had a few more buttons, these are the kinds of sacrifices you make when purchasing an entry-level product. By the time we add up everything on our wish list, like a jog wheel, a knob for saturation, and maybe a few buttons to toggle between editing windows, we’re talking about getting the next product up in Tangent’s lineup. That said, if Ripple had just two more assignable buttons, we’d be happy campers. It’s really our only gripe.

The bottom line is this: If you love working with color, or if you don’t love it, but you do it anyway, the Tangent Ripple is easily worth its list price. It’s easy to setup and easy to use. It’ll speed up your color grading, and it’ll probably make working with color a more enjoyable process.

The Tangent Ripple is a competent, entry-level tool for anyone who takes color seriously, but who doesn’t want to spend over a thousand dollars on an input device.

Mike Wilhelm is not Chris Monlux, but he wishes he was. He’s also Videomaker’s Director of Content.