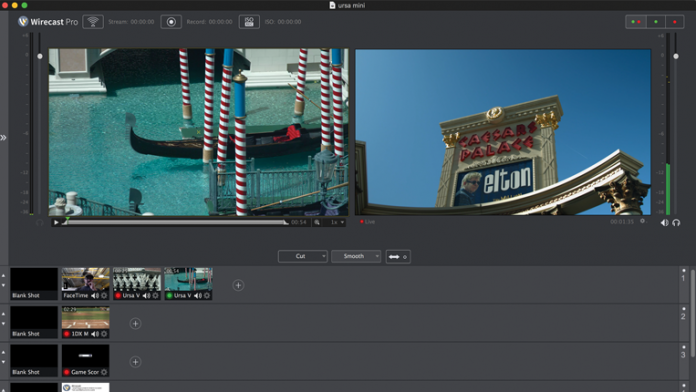 After meeting with Telestream, Wirecast showed itself to be a promising  solution as the only switching software compatible with Facebook Live.  We must note that not a month later Facebook opened up their API to run with any program with RTMP protocol. However, Wirecast 7 still holds a unique place in the market. Additionally, Wirecast is not limited to streaming over Facebook Live.

Installation was simple. In fact, we first started using Wirecast 6 before 7 was released. A fresh install of Wirecast 6 on our Macbook Pro was completely uneventful. Soon thereafter, when 7 was released, the upgrade was so painless, we weren't sure we had done it right — it was just that easy. Having used Wirecast 6 a few times for Facebook Live streams, we had selected our camera sources and were streaming live within five minutes. We were even able to do a simulcast to both Facebook and YouTube.

For our review of Wirecast 7, we wanted to get a better training than just jumping in and learning as we go. Luckily enough, Telestream offers some great learning resources and videos, and they even offered a webinar on the new features of version 7, which we found helpful.

What It Can Do

At its core, Wirecast 7 is a software input switching tool. It can switch between any captured sources in real time. You can even add transitions and fades when going between sources. While only using  your computer running Wirecast, you can switch between an unlimited number of input sources. Wirecast allows you to capture from a camera, microphone, webcam, IP camera, a capture card, your computer screen, pre-made videos, images and more.  You can use an iPhone 4S or newer as a wireless camera input source and it can even pull live Twitter feeds into the broadcast.

Wirecast allows you to capture from a camera, microphone, webcam, IP camera, a capture card, your computer screen, pre-made videos, images and more.

Wirecast 7 features dynamic editing of any and all sources, with the capability to resize, crop, position, flip or rotate. Need to do some keying live? Wirecast does that, too. And if you get the Pro version, you can even have a instant replay system to review and playback clips at the speed of your choice. Add that to the ability to bring in real-time data directly from a scoreboard to an overlaid scoreboard and you’re ready to live stream any sporting event.

Wirecast 7 does not limit where you can stream. Stream to one or more locations simultaneously, including Facebook Live, YouTube Live, Twitch, Church streaming.tv and many others. All you have to do to stream is enter your username and password to your streaming provider.

New in Wirecast 7, you’ll find many upgraded features, with added performance features like GPU-accelerated encoding for both Mac and PC and lower CPU usage. Additionally, there’s now a way to display your output frame rate, system CPU and system memory.

As mentioned, there’s now a dynamic editor for editing clips. Plus, you can stream picture-in-picture or layer up to 250 different sources on screen at the same time. If you have ever experienced any video sync issues, you know that it can be problematic during a live stream, but Wirecast 7 has the ability to delay video and/or audio for sync. Change your hotkeys for switching, replay or other repetitive tasks.

With Wirecast 7 Pro, you can now create high-resolution recordings of each camera or audio sources. You can also isolate clean shots with no tilting or lower thirds for later editing or live replay. Wirecast 7 allows you to stream and record video and audio using the newest codecs and compression

Other notable new features include the ability to place and use text from a variety of sources, like from a file or an RSS feed. The RSS feed can even be configured as a running ticker. You can now adjust brightness, contrast, gamma, hue and saturation of any input source.

Any available system audio device can be routed to all audio, and tools like mix minus, panning, source selection, muting and source control volume are all in one place.

Lastly, you can add a solid color as a source for any needed use.

Wirecast 7 Pro is $1,000 and that's no small amount to pay. However, it's a robust program and offers a simple solution that doesn't require any hardware to get started. Wirecast 7 Studio comes with fewer features, but will save you $500 over Wirecast 7 Pro.

Alternatives include Xsplit, which costs $449 for a lifetime lease or between$ 2.50 and around $8 per month, depending on lease term, is not as in-depth as Wirecast but has many of the same options.

The NewTek TriCaster series also offers hardware-based solutions but no standalone software. The hardware is required and starts at $5,000 for the Tricaster 40 and goes up to their full Live Sports 460 solution for $55K.

Wirecast 7 is an easy to use program that gives a lot of valuable flexibility while offering some very robust tools. It’s not cheap, but it’s not as expensive as some other options. Wirecast 7 holds a unique place in the market and would fit many different types of production. Event videographers, YouTubers, houses of worship, journalists and let’s players could all use Wirecast with some very high quality live streaming production tools.

Wirecast 7 is a software for LIVE video switching with the capability of live keying, titling and many other options. It’s easy to use and depending on what you use it for quite affordable. We would recommend it.

Chris Monlux is a troll. Let him troll the interwebs, and you might see a smile. He’s also Videomaker’s Multimedia Editor.