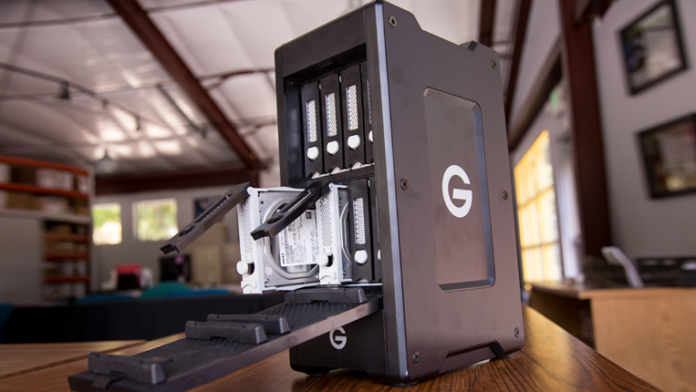 We met with G-Tech at CES 2016, where we got out first look at the Shuttle XL, G-Tech’s newest Thunderbolt 2 RAID storage solution. Equipped with dual thunderbolt ports, configurations from 24TB all the way to 80TB and the capability to be daisy chained for even larger solutions, the Shuttle XL is built with 7200 HGST (Western Digital) 3TB enterprise class hard drives. Enterprise drives mean you can expect better reliability and longer life, making them better suited to RAID arrays. The Shuttle XL is a hardware RAID capable of being setup in RAID 0, 1, 5, 6, 10 & 50.

On top of its maximum 80TB capacity, there is also the option to include two EV bay adapters to use with G-Tech’s Evolution Series drives. Plus, you can use an adapter to read RED MINI-MAGs, making it perfect for on location data storage.

The Shuttle XL can be formatted to work with a PC or a Mac. The case is very rugged, and looks like its home could be on the road. Its enclosure has a very sturdy handle on it, communicating portability in its design.

When you’re in the market for a RAID, you need to find out what you are going to be using it for. If you have a huge amount of internal storage on your computer and those drives are fast, it might be the best option to just get a RAID for archiving purposes. However, if you’re like us and are often bouncing around to multiple large projects, you should consider a storage option that is fast enough to edit off of.

The speed of a storage device is key when working with high bit rate footage. In our testing, using Blackmagic Design Speed test, we found that the Shuttle XL on our system could write 810 MB/s and read 955 MB/s. The dial within Speed Test doesn't even go that high; the needle was pegged, and it just kept counting up higher and higher.

To put that in perspective, let’s consider a 4,000 x 2,160 CinemaDNG raw file from a Blackmagic Design URSA Mini 4K. In this scenario, the camera shoots at 265 MB/s.  The Shuttle XL could play 3.5 clips from the URSA at that quality simultaneously and that’s pretty impressive. Pushing a bit under a gig a second will get the job done fast.

There are loads of RAIDs on the market that vary greatly in price. You can build your own or buy rackmount options. There are systems that are portable and others that are super redundant. No matter what your flavor, the Shuttle XL has great performance, but  when compared to other RAIDs on the market, here’s what we found.

The Promise 24TB Pegasus2 R6 is $3,425, has 24TBs of storage, two Thunderbolt 2 ports capable of being daisy chained, six hot-swappable drives and all of the same RAID configuration options as the Shuttle XL.

Next is the LaCie 20TB 5Big Thunderbolt 2 series 5-bay raid. It’s $2,000 and offers five hot-swappable drives and two Thunderbolt 2 ports capable of being daisy chained. This RAID can reach read and write speeds up to 920 MB/s and 880 MB/s respectively.

The best value of these is the 5Big from LaCie. However, its drives are not enterprise class. LaCie does offer a enterprise option but only at 40TB and at $4,000. Then, unfortunately, Promise does not advertise what kind of drives it uses.

Considering the enterprise drives and the bay adapters, we think the G-Tech compares favorably against both the LaCie and the Promise.

Should you buy it?

The exterior design and the enterprise class drives make the Shuttle XL appear to be an in-the-field workhorse. The ability to unload your RED MINI-MAGs on site make it perfect for documentarians and independent filmmakers. It would also work well for event videographers and corporate filmmakers as a large and fast storage solution. Jacks of all trades and post-production specialists in need of bigger and faster storage options would be a good fit, too. Its price makes it hard to justify for amateurs or enthusiasts.

The Shuttle XL is super fast, can be huge and you can even unload your RED MINI-MAG with it. We found it very simple to setup and use with a Mac, though we experienced a clunky set-up with a PC. You get a RAID for less money, but the Shuttle XL is ready for the field and offers some very unique and attractive options. If you’re in the market for a large storage solution with flexibility and reliability, we can recommend the G-Tech Shuttle XL.

Chris Monlux loves milk chocolate. If you trick him and give him dark chocolate, you might get slugged. He’s also Videomaker’s Multimedia Editor.