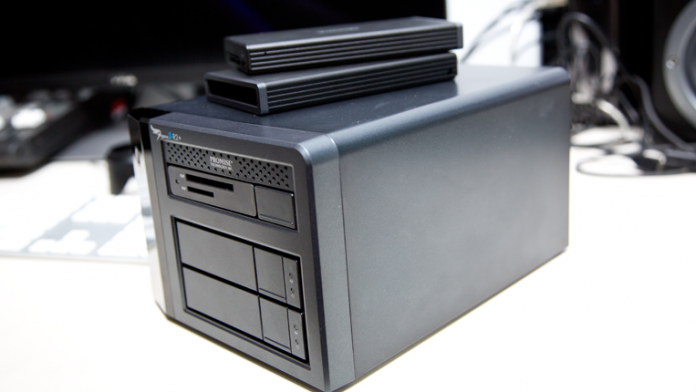 Affordable, high-bitrate cameras are becoming more and more prevalent in the marketplace. This means every time you shoot video, you are creating more and more data. That data can be a burden on systems with small amounts of storage or force an overwhelming choice between what to purge and what to keep. Many producers are weary of deleting any data, hoarding it for a rainy day when it might be needed again. When you find yourself in this situation, it’s time to deal with it by expanding your storage capabilities.

There are many ways to increase the volume of data you’re capable of collecting. There are products upon products that will help you do this, from single, standalone hard drives to data servers that require a rack space to store. The Pegasus2 R2+ is a standalone RAID storage array that will allow you to create redundancy through a mirrored RAID, also known as RAID 1, or create an abundance of storage by unifying two drives into one, known as RAID 0.

The Pegasus2 R2+ is made up of two Toshiba 3TB 7200RPM drives with an expandable pod slot. Included with the base model is the SD card and compact flash reader pod. Also available are a 1TB HDD pod, which costs an extra $170, and a SSD reader pod, which is just an open bay for an SSD drive for $50.

The array connects via thunderbolt and can be daisy chained with up to 6 other thunderbolt devices. When using thunderbolt, the RAID and pod slot are available and connect to your computer. However, the R2+ can also be operated using USB 3.0. When connected via USB, the pod will not connect to the computer, only the RAID. That could be a problem, but all of the pods can be directly connected via usb to your computer separate from the enclosure. Plus, the R2+ array comes with a thunderbolt cable and two different USB cables, so there is no need for extra connection cables. Additionally, the PROMISE Disk Utility function is inoperable when connected via USB. The disk utility allows for the user to change the type of RAID configuration, but only when connected via Thunderbolt.

When connected via Thunderbolt, changing the RAID type is easy and takes a few minutes. Simply choose what type of RAID configuration you desire, and after erasing everything on the drive, you’re ready to go.

The first test was an everyday task — writing a file and reading it from the drive. We tested this by dragging and dropping a file from the computer to the R2+ and then opening it from R2+ with our editing software. The transfer speeds seemed fast, and there was no issue playing and editing the video from the drive.

The transfer speeds seemed fast, and there was no issue playing and editing the video from the drive.

This is a fine test, but we needed to be more precise. To verify the transfer and read speeds, we set up a RAM disk. A RAM disk, also known as a RAM drive, is a block of RAM that a computer's software treats as if the memory were a disk drive. Because RAM is so much faster than internal HDDs and SSDs, doing this verifies that the transfer of data from the computer is not restricting the flow of that data. All of our data up to this point was validated with the RAM disk test.

To give exact read and write speeds, we used an application by Blackmagic Design called Disk Speed Test. It’s a free application for Mac only. Here are our findings:

To quantify these results, it’s best to understand what data rate your camera shoots in. Most cameras put this in terms of megabits per second, or Mbps, however our findings are in MB/s or megabytes per second. To decipher the results so that it is an apples to apples comparison, you must know that there are 8 bits in 1 byte. Let’s look at an example: The Panasonic GH4 shoots up to 200Mbps. To find out the MB/s just divide 200mbs by 8, getting 25MB/s. Putting this in terms of this product, when in RAID 0 at close to 350 MB/s, the R2+ can play back 13 videos from the GH4 shot at 200Mpbs at the same time without stuttering.

There aren’t any products at the moment that are exactly like the R2+, but that doesn't mean there aren’t products that are close. Glyph makes the SR6000, a 6TB RAID for $500, but it doesn’t have pods and doesn't connect via Thunderbolt — just USB 3, FireWire and eSATA. G-Tech makes the G-RAID in both 8TB and 4TB versions, which connect via Thunderbolt, for $800 and $400 respectively. Unless the USB and Thunderbolt connection and pods are things that your workflow needs, the R2+ is a bit on the expensive side. Then again, it’s the only one we found that offers all of these features together.

The PROMISE Pegasus2 R2+ is nicely built, offers usable features and functions exactly the way PROMISE says it would. So do we recommend it? Yes; It’s fast and offers customizable pods, which is a unique offering. On top of that, it’s a good product worth buying.