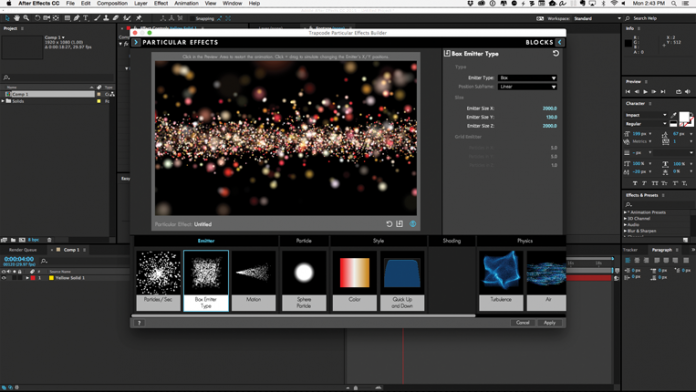 The incredibly talented developers at Trapcode have created some classic Adobe After Effects plug-ins over the years. You may not have known it, but when you see killer particle effects in broadcast and video motion graphics, the artists are most likely using Trapcode plug-ins. Particular and Form are at or near the top of most everybody’s must-have plug-ins list. The recent Trapcode Suite 13 update only cements that position as the go-to place for amazing particle effects. Along with some updates to iconic products, they’ve added an interesting new plug-in, Tao.

In Trapcode Suite 13, available from Red Giant Software, users get updates to every part of the package, all of which add new features or speed up rendering times.

Let’s talk about some of my favorite parts of this update.

This update includes some new features including 130 new presets, a sprites library, a very cool explode behavior and an expansion in the number of particles to 30 million. A huge new feature is a big step in improving the user experience. The new effects builder allows you to build custom effects based on visual building blocks.

You are presented with a wide variety of behaviors and styles for emitters, particles, physics and auxiliary particles. You can easily create custom particles based on your own images and you’ll see a real-time visual representation while you are building your custom particle effect.

Particular has been a staple for After Effects users for years and the interface was always quite hard to grasp, but with this new effects builder, users can easily tweak one of the many presets or create their own custom particle effect quickly and simply.

As before, users can create effects based on fire, smoke, fireworks, explosions, dust, muzzle flashes and many other real-world particles. There’s also presets for more abstract effects like magic and light. Particular has been a staple for After Effects users for years and the interface was always quite hard to grasp, but with this new effects builder, users can easily tweak one of the many presets or create their own custom particle effect quickly and simply. This feature is truly one of the highlights of this update.

When this plug-in was introduced many years ago, users finally had access to volumetric lighting effects that only the highest end graphics houses used, at a price even the hobbyists could afford. Unfortunately, the Shine effect hadn’t been updated for a very long time. Now, with this new 2.0 release, Trapcode has added some really useful and modern features that bring new life to this effect. Light rays generated from your layer can now exist in 3D space, respecting the angle and position of the camera, making this a true 3D volumetric lighting effect. Trapcode also added fractal noise to give light rays that realistic smokey look. Users can tweak the noise to provide a parallax effect to provide even more depth.

When Mir was introduced a few years ago, we found it interesting but wasn’t really sure how it would fit into our needs as motion graphic designers. Mir allows you to create 3D surfaces and terrains using procedural fractals. This new update adds some new fractal shapes and distortions like spirals. There’s also new options for wireframe rendering and seamless looping. Your GPU is used to accelerate much of the rendering and users have control over the rendering mode, allowing you to create the low-poly look that’s popular today. We’re still not sure how we can use this in most of our projects, but we do know that when creating Mir, Trapcode developed a system that became the basis for their newest product, Tao.

Before Tao came out, it’s creator, Peter Norrby, tweeted previews of his new plug-in on Twitter over the span of a few months. These stills and videos teased the release of a whole new type of effect, and based on what we we saw, we could not wait to jump into using this amazing new product. We have certainly not been let down. Tao creates procedural images and animations based on shapes, masks and position data of 3D lights. Think of it as a shape repeater and extruder. With GPU acceleration, your images can include incredible shadowing, reflectance, and even lighting based on an image of your choosing. You can animate every parameter including length, shape offsets, repetitions and much more. Tao creations can include photo-real texturing, image-based lighting and environment map reflections based on the included 14 HDRI maps or your own images.

Other customizable parameters include tapering, wireframe rendering and fractal distortions — all GPU accelerated.

Looping your animation is easily done using Tao’s offset and looping system.With this plug-in, you can create an unlimited variety of geometric shapes, extrusions and spheres, all animatable along a custom path. These shapes work in concert with the After Effects 3D camera and lights to create amazing motion graphics that, up to this point, have not been available to AE users. The lighting, texturing, reflectance and shadowing provide a high level of realism without sacrificing quick render times. We’ve spent hours playing with all the controls to create unique looks and movement that we are simply loving.

This update to a suite of much loved plug-ins shows that Trapcode can continue to innovate, but there are a couple of negatives that I must mention: the price may alienate beginners or enthusiasts. Fortunately buyers can pick and choose the tools they need and buy them a la carte. The upgrade price is quite reasonable considering the substantial upgrades to Particular and Mir and the inclusion of Tao, but we would have liked to have seen some kind of update to Form as well. Overall, however the upgrade is well worth the price.

With updates to the user experience, new unique features, enhanced realistic effects like reflectance and shadowing, and the introduction of Tao, After Effects users have more reason than ever to add or update this collection of awesome tools. Every serious motion graphics or visual effects artist must have particle generation capabilities and Trapcode Suite 13 provides the broadest set of powerful but easy to use creative effects.

Trapcode Suite is made up of several different tools that each have their own compatibility info which can be found at http://www.redgiant.com/products/trapcode-suite/compatibility/