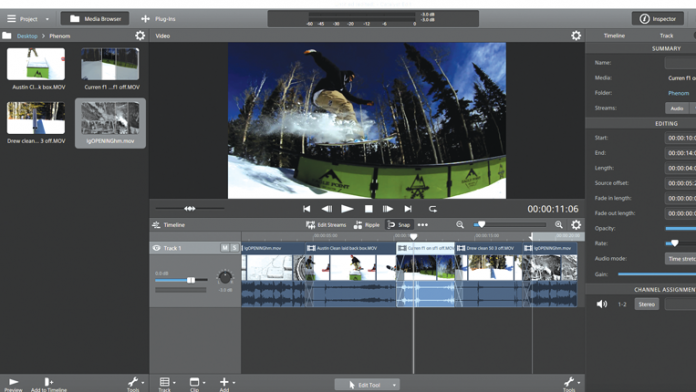 Whenever you hear about something new from Sony, you have to take notice. This time it's Catalyst Edit, part of the Catalyst Production Suite. Sony already has a good editing app in it's Vegas Pro software, so why this new addition?

Unlike Vegas Pro, Catalyst is both PC and Mac compatible and has several pieces that allow for unique collaborations between production and post-production teams. However, it won’t necessarily appeal to everyone.

The Suite is comprised of Catalyst Prepare and Catalyst Edit. Prepare is the first step in the process and allows you work with your video directly from the source. You can log and label your clips, import them into bins, apply color correction and even begin rough editing. This is a great tool for the director or producer in the field to begin the post-production process.

As it’s not designed to replace Vegas Pro, Catalyst doesn’t come preloaded with all of the bells and whistles you might expect.

As it’s not designed to replace Vegas Pro, Catalyst doesn’t come preloaded with all of the bells and whistles you might expect. However, does take advantage of OpenFX for additional transitions and effects and exports to other programs better suited to handle graphics and other post production tasks.

Sony has put a lot of thought into they way audio is handled. The suite makes it very easy to identify and label all of those audio tracks that higher-end cameras can record.

Putting It to the Test

The Suite does not have a tutorial, but if you're familiar with other editing programs, the interface is fairly simple. However, if you’re unfamiliar with other Sony video applications, we advise downloading the User's Manual when going through the installation process, as some of their conventions are unique to Sony software, and Adobe or Apple editors may experience a gradual, but noticeable learning curve.

After using Catalyst Prepare to import the video and saving it to bins, you launch Catalyst Edit and navigate to the bin. From this point the program is going to have a very familiar look and feel. The clips can be marked with in and out points by clicking and scrubbing or hitting "I" and "O" on the keyboard. You simply drag and drop the clips into the timeline and begin the process.

Transitions work exactly as they do in Vegas Pro. The way it’s handled is not a simple drag and drop between the clips like in most editing apps. In Catalyst Edit, you click on the clip and drag it to overlap the clip in front of it. This is nice because immediately you have a dissolve. At first this seems imprecise but the inspector window gives you more controls.

If you need another type of transition like a wipe or a additive dissolve, then it is more like other programs. The plug-ins from the Media Browser window get dragged into the transition.

Again, the Inspector window has lots of fine tuning, like frame accurate in and out points and transition length. This seems to be a little more intuitive than some programs.

It was a bit disappointing to find that Catalyst does not come with lower third or other text templates, but it does have a simple way to make basic titles. Clicking on the add button and title drops in a new clip in the timeline. Once again, the Inspector window is the key for easy adjustments for the font, size, positioning, shadow, outlining, transparency etc.

We imported clips from a variety of different lighting conditions to see how the program can balance the shots. In the same manner as transitions, you select a plug-in to drag and drop over the clip. Catalyst comes with the essential video effects like brightness and contrast and color balance. These are also fine tuned in the Inspector window. With a simple click on the video settings button, a waveform window opens to make the process more precise. Balancing shots was quick and easy.

Audio channels are handled simply and precisely by opening Media Browser window and navigating to the correct bin on your computer. Drag and drop the audio to the timeline and make the adjustments in the Inspector Window. All your adjustment are made in real time.

Once the project is finished, the entire project can be exported to another application like Final Cut Pro, Adobe Premier or Sony Vegas Pro for final post-production. You can also render the project into it's final form like MP4. Because this is from Sony, you will find formats not found in other programs, such as XDCAM and Sony W64

If you need the flexibility of multiple camera formats, especially if one of those cameras is a Sony, with an environment that is designed for collaboration and the option of OpenFX, then Catalyst Production Suite is a viable choice.

Jeff Chaves was trained in video production in the Army and has been involved in the industry for more than 27 years. He and his wife run Grace Pictures Inc.