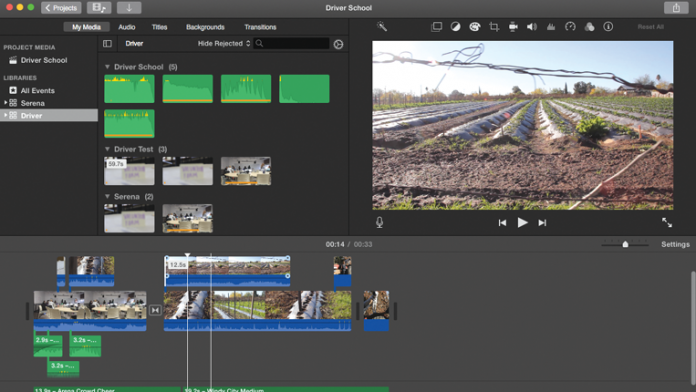 Apple’s latest version of iMovie follows in the footsteps of earlier versions of the series, in that it’s a fluctuating process of innovation meets frustrating compromise. This seems to be Apple’s modus operandi — give something new, take away something useful. We are given 4K content options, but we lose wrapping timeline, a key feature that speed up workflow productivity. We can all agree that change is never easy, but do the changes have to needlessly alienate the existing user-base? Then again, why should we be so critical of an entry-level, free app like iMovie? It is a blip on the nonlinear radar, but beginners can use it to create fantastic results.

Indeed, iMovie is a great place to start if you want to start simply and gradually move up to fully developed programs by working on your pacing, structure, etc., without burning a hole through your wallet. Still, do not expect to reinvent the wheel with this software. Keep in mind that iMovie is a starting point for novice and intermediate editors.

The Look, The Feel, The Features New and Past

The design of iMovie 10.1 is simple to navigate. We worked, without assistance, through most of the basic and advanced functions within an hour — importing/exporting, color correction, audio manipulation, titles, etc. For more detailed advice — mainly keyboard shortcuts — we referred to the manual. The novelty of iMovie revolves around its simplicity. You can mark in and out points on clips and quickly drop them into the timeline to edit or just drop the entire clip and trim it on the timeline. Adding transitions, music, and effects is just as simple.

Anyone remotely familiar with past versions of iMovie will have no problem creating a project to share with friends, family, and the YouTube community. The libraries are easily accessible thanks in part to an organizational system that allows you to hide the browser, which is dedicated to projects, leaving only the preview window and timeline. You can construct new libraries, and events within. Note: No matter what project you open, you still have open access to every library’s footage. Don’t make things too complicated for yourself. On a 2.8 GHz Intel Core i7 MacBook Pro, It took 31 minutes to import 40GB of footage. Depending on the power of your computer, your milage may vary.

The novelty of iMovie revolves around its simplicity.

There are quick buttons for transitions, titles, backgrounds, audio and media. Alternatively, you can make changes to media clips via color balance including white balance, match color and skin tone balance or color correction with controls for highlights, saturation, and temperature. Also available are cropping, stabilization, speed, clip filters and overlay settings including cutaway, blue/green screen, side by side and picture in picture.

Still, these choices limited in the sense that full manipulation of your footage, when compared to Final Cut Pro, is not attainable. For those of you who are looking for truly professional production values, we suggest you try something else as this is an entry level software.

You can export video directly to YouTube, Vimeo, Facebook, iTheater or do a custom export in File. Finally, you can export 1080p files at 60fps, which looks rather good when slow motion effects are applied.

The user interface has seen some unfortunate changes. Key features from previous versions — wrapping timeline and dual monitor mode — were removed in favor for an attempt at a standardized timeline. These subtractions, namely wrapping timeline, have become a point of contention with iMovie users, even prompting some to start Facebook petition pages. Quick Tip: you can scroll sideways by holding Shift + Scrollwheel, but we do see how this can be construed as a negative factor. Why not give people the option to choose a format that coincides with their needs? Fortunately, iMovie still has a b-roll video track — a notable differentiator from Windows Movie Maker.

When testing on a modern, 2015 5K iMac, 4K worked flawlessly. If you’re on an older machine, 4K may be more of a challenge. We tested this software on a late 2011 Macbook Pro with a 2.8 GHz Intel Core i7 and El Capitan. We could still import and export 4K footage perfectly, but playback within iMovie, and even the exported file, was a bit choppy due to the older graphics card. The introduction of 4K exportability is the biggest sales pitch within version 10.1.

While searching through message boards and product reviews, we came across a few common complaints from users, but often, the iMovie community was able to find solutions. Of the issues highlighted across the Web, we only encountered one —  periodic crashing — and it was minor. We worked with this software for a nice length of time and it crashed twice. Fortunately, iMovie is continuously auto-saving.

If you search through the Apple Support Communities you will more than likely find other complaints related to technical malfunctions and glitches. In our testing however, we did not run into any major issues in functionality.

iMovie is a fun and engaging experience, but carries with it the propensity to be a by-the-numbers program with 4K thrown on top. The reality of the situation suggests that the software is an interestingly constructed application that succeeds at appealing to beginners. Advanced editors may find it repetitive in some of the simplest tasks, but iMovie clearly isn’t made for the advanced editor. It provides a useful and affordable outlet for future artists to create content.

Operating System: OS X Mavericks
RAM: 2 GB of memory (4 GB recommended)
4K export requires a Mac from 2011 or later with at least 4GB RAM.
Full-resolution 4K playback is supported on iMac with Retina display and Mac Pro (2013 or later) when connected to a 4K display.

Quinn Winchell holds an MFA in Directing from the Academy of Art University in San Francisco and has lectured at California State University, Chico in narrative screenwriting, American cinema and world cinema.