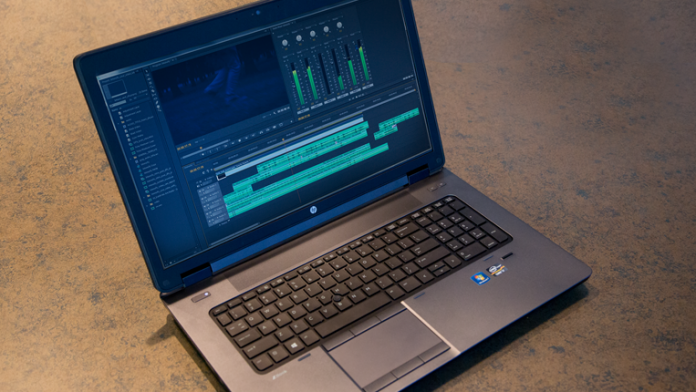 The HP ZBook line is a “no compromises” approach to delivering professional workstation-class performance in a portable size. For this review, we had the pleasure of testing the ZBook 17 G2, outfitted with many top-tier options. This is a product designed for the most demanding professional user in mind and would certainly deliver in video production, animation or engineering. The ZBook has USB 3.0, Thunderbolt and SD Card for input, so you'll never have trouble getting content onto it, and when you need more storage or memory, it has two extra SATA storage and memory slots easily accessible from the underside. Upgrading storage or memory is literally as easy as changing the battery pack. With the fastest WiFi at the time of this writing and the option for LTE wireless service, you can be guaranteed the fastest internet connection possible for uploading whatever content you produce at home, work, or on the go.

The model we reviewed was the ZBook 17 G2 which came equipped with an Intel i7 4940MX quad core CPU with hyperthreading for 8 processing threads at 3.1GHz all the way up to 4.0GHz, an Nvidia Quadro K5100M graphics, 16GB of 1600MHz RAM, a 512GB SSD connected directly on the PCIe bus for maximum throughput and an HP Dreamcolor display touted to provide the most accurate color rendition available. The back of the screen and the underside of the chassis are black metal and the rest of the laptop is a sturdy black plastic that feels surprisingly tough. There's nearly zero flex to the lid when you open it, but the hinge is tight and may require two hands to pry the screen off the keys without the whole thing lifting off your work surface — which may seem surprising given that the whole package weighs in at a hefty 8 pounds. The keyboard consists of flat, back-lit keys and features a number pad. There is a multi-touch track pad below the keys as well as a track-point in the center of the keys. There is a biometric security scanner and hardware toggles for mute and Wi-Fi for added convenience.

The most important features of this product are undoubtedly the massive processing power in both the CPU and the Nvidia Quadro graphics.

The most important features of this product are undoubtedly the massive processing power in both the CPU and the Nvidia Quadro graphics. Having a fast CPU has obvious benefits, but less understood are the benefits of a fast OpenCL and CUDA supporting GPU. For applications that support it, offloading rendering and other power intensive processes from the four cores on the CPU to the 1536 cores on the GPU can have massive gains in speed. Applications such as Adobe CS and CC, Sony Vegas, Final Cut Pro and many other popular editing suites support this functionality and will take full advantage of this power.

Because the review unit was running Windows via the 512 GB SSD, boot sequence was a quick 15 seconds from the time we pushed the power button until we heard the Windows start sound. The screen is bright and is easy to see in every setting short of direct sunlight. We did notice that the backlight driver made a faint high pitch squeal, noticeable only in dead silence, which varied with the brightness setting. This was a minor annoyance.

The next test we performed was data transfers and media transcoding. We copied the contents of a 6.84 GB DVD from my external hard drive via USB 3.0 to the SSD. This transfer took about 60 seconds at a rate of about 90 MB/sec. Using Handbrake, we transcoded the DVD into H.264 using the “high profile” preset, which took only 17 minutes. Copying the finished 1.21 GB file back to my external drive took only 16.6 seconds.

For the last series of tests, we wanted to see how battery life is during a range of usage scenarios, which was accomplished by running the battery empty from full charge. The low usage scenario consisted of browsing the web and catching up on social media, during which the battery held out for three hours and 25 minutes. Next, I wanted to see if I could stream, at the very least, a full movie from Netflix, so I started playing a season of “Friends”, which it continued to play for two hours and 40 minutes — in other words, probably, depending on the movie. Finally, I tested full utilization of both CPU and GPU with the screen on full brightness, in order to simulate the most intensive usage imaginable, which it handled for more than 50 minutes until the system shut down.

Given its weight, bulky size, and less-than-ideal battery life, the HP ZBook 17 G2 is hardly a laptop computer and much more a mobile workstation. It could comfortably replace a desktop workstation using the HP docking station, where one could connect a 4K monitor, quality speakers, and a conventional mouse and keyboard. There is also the option for an external 9-cell/100 WHr battery, which will more than double your available power while unplugged. Battery life aside, with its sturdy construction, top-of-the-line processor, unbeatable graphics and display, easy access for upgrades and drive swapping, plus a wide variety of super fast data connections, the HP ZBook 17 G2 doesn’t need to fight for a place at the top — this workstation stands at the pinnacle of mobile computing.

Brandon received a BS in Physics from Sac State and has over 15 years of computer science experience. He currently resides in Chico, CA.