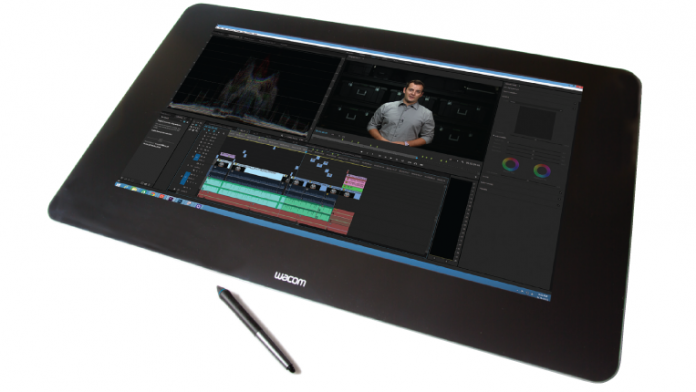 The Cintiq 27QHD creative touch surface from Wacom is really fun to work with, and a great surface for graphic design, but we thought we could customize it into a powerful video editing tool as well. Touch screen video editing isn’t brand new but this model’s sleek interface and additional tools made it an interesting candidate for applying to video post-production.

The Cintiq 27QHD itself is a 27-inch — 23.5 active area — edgeless touch-screen tablet with a Pro Pen stylus and ExpressKey remote. It was designed as a drawing surface for graphic designers needing pen/brush controls and a customizable handheld remote for ease of use. For our purposes, the Pro Pen’s tilt recognition and 2,048 levels of pressure sensitivity may be lost on almost everything other than digital animation, but the rest of the features proved to be quite useful for editing.

The tablet’s native resolution is a whooping 2560 x 1440 giving the user twice the resolution than a 1920 x 1080 high-definition television. With a contrast ratio of 970:1, a brightness level of 330 cd/m2, 97 percent RGB and optional external color manager the tablet, without even considering touch sensitivity, is a top tier HD monitor. If the price tag weren’t so high at $2,299.95, just as a display the monitor would be a great recommendation creative professionals. What makes the Cintiq interesting though, and possibly worth the price tag, is the chance to get truly hands on with video editing and compositing.

The pad was designed for illustrators and animators and made to simulate the feel of real pen on paper. The tablet’s Pro Pen is a top-of-the-line creative stylus designed for drawing, painting, image editing and 3d animation featuring tilt recognition and combined with the screen, 2,048 levels of pressure sensitivity. The pen comes with 10 additional tips to simulate different pen and paper feels and a base to keep tabs on the stylus. The ExpressKey remote features 17 customizable buttons and a jogwheel which really come in handy for video shortcuts and timeline scrubbing. The remote is rechargeable and can be magnetically attached to any part of the monitor’s border so it’s never far from hand.

The Cintiq 27QHD can be connected via either Display Port or HDMI and includes five USB 3.0 ports bordering the screen. The screen size is a little confusing as everywhere in the product description it’s depicted as a 27-inch monitor when in fact the tablet’s active area is only 23.5-inches. The remaining 3.5 inches act solely as a resting area for the user’s hands and the ExpressKey remote.

The edgeless design gives the CINTIQ a sleek looking finish and the tablet also comes with two small legs giving the monitor two standard viewing positions, flat and a 20 degree tilt. An optional stand can be purchased with the tablet for an additional $400 which, compared to the cost of the tablet, isn’t much more for the increased usability.

The features that stood out for video editing were the option to turn touchability on and off and those 17 customizable buttons. The ExpressKey’s ergonomic design made it easy to use shortcuts without having to look away from the screen and the jog wheel was an incredible feature, turning a keyboard-based editing station into something more reminiscent of an video mixing console.

The tablet was simple to connect and start using almost immediately. For some computers, the screen is meant to plug and play but with our setup, a simple driver installation was all we needed to get started. Looking through some footage it was easy to see the colors were in fact bright and looked accurate, as well as motion that was as smooth as the other 60hz monitor setup next to the tablet.

Using Adobe Premiere to test to the Cintiq 27QHD, it was quickly apparent how vital it is to be able to turn on and off touch sensitivity to skin after unwittingly rearranging clips up and down the timeline by accident. Using the stylus made for a lot more precise actions but being that clip edges are so small it can take some getting used to clicking on small edges and placing clips accurately. After some use, the ability to reach directly into the timeline became quite fun and liberating knowing the strain hours of mouse use can cause.

The expresskey remote added enormous functionality to the process allowing for up to 19 shortcuts and a very useful jogwheel. The shortcuts truly are customizable too, allowing for a list common shortcuts, mouse clicks and any other combination of keystrokes the user can input themselves. Having play, stop, reverse, undo, redo and a list of other shortcuts all within a small handheld remote was a great addition to process and freed the arms and hands up for a more unrestrained working positions. The jogwheel, like those in many video editing consoles was a huge time saver, allows for quick scrubbing through video at any speed and makes the remote even more useful.

Without the optional stand, the surface was difficult to see under the glare of ceiling lights, making the stand an almost required purchase along with the tablet for visual clarity.

When retouching some still photos for a video project the tablet really shined being its original purpose. For the editing aspects the tablet was nice to use for its tactile feel and liberating range of motion granted from the touch interface and 23-inch surface. For graphic applications often employed to supplement video, the Cintiq is undoubtedly state of the art.

Overall, the tablet is a sleek-looking piece of equipment that feels futuristic to use but comes with an appropriately large price tag. For advanced video editors and compositors with a range of extra-video material to produce, the tablet can fill many roles very well. For a video editor simply wishing to use a basic touchscreen surface however, there are several other, more cost effective options are out there. After some quick searching several comparable screens at the same resolution and comparable colors and brightness came up, at less than half of the cost. The other screens did not include a stylus or remote however but were several inches larger. If you have a budget and a strong need for animation along with straight video editing this tablet could be for you. Until editing softwares or Wacom start catering themselves towards each other and prices drop however, a cheaper touch screen with a few less features may be the ticket for budget-minded editors out there simply looking to start using their fingertips.

The Wacom Cintiq 27QHD although state of the art and a useful addition to any workflow is cost prohibitive for the average video editor.

Sky Scholfield has been producing videos for clients for 10 years including National Public Radio, The Smithsonian and small non-profits throughout Northern California including One Mobile Projector per Trainer. He now lives and works in Chico, CA for North State Public Radio and Runners of the Dawn.