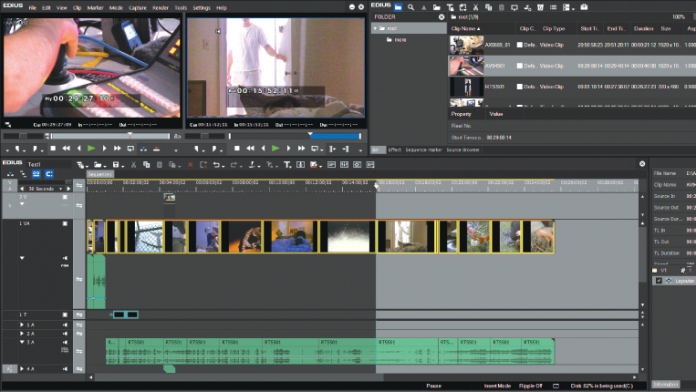 When we last visited EDIUS (v7, December 2013) we were incredibly impressed with its processing speed and the vast variety of codecs it supported. We’re happy to report that this hasn’t changed. The new version 8 release is snappy, stable and simply put, just plain enjoyable to use.

The first item of note is the reduced tier system, a move that’s always welcome. Gone are 7’s Neo and Elite editions. EDIUS Pro and Workgroup are the only options. Workgroup, available for $1000, is designed for multiple-seat, overlapping environments with added support watch folders, advanced import/export/media management features, loudness meters and captioning. For this article however, our testing was performed on a Windows 7 laptop with a Core i7-4600M and 16GB of RAM running a pre-release build of EDIUS 8.1 Pro.

Installation was relatively painless. New users are required to create an EDIUS account and then associate their registration key with it. The GV License manager will require you to check in about once every 60 days to verify this license. Those familiar with Adobe’s Creative cloud will be more than familiar with all of this and indeed may even find the Grass Valley implementation a little less intrusive.

Editors new to EDIUS 8 will find themselves comfortable with its newly-refreshed interface from the moment they enter it, even though it can be customized through the roof. We love the idea of switching between single and dual monitor edit layouts, and could identify virtually every icon’s function on first sight. Buttons are placed logically and conveniently. That said, we soon felt the urge to scale back and remove some of the bits we don’t use very often and make our own slightly cleaner layout, a process we could easily accomplish.

We love the idea of switching between single and dual monitor edit layouts, and could identify virtually every icon’s function on first sight.

What might be unfamiliar to newcomers is the timeline, which while not new to EDIUS itself is slightly different from the most popular edit systems. Users can add separate title tracks which are actually placed beneath V1, and also have the ability to add combined video/audio tracks to the video section. This may sound a little non-intuitive at first but becomes second nature rather fast and in a way makes sense from a philosophical standpoint. Users can opt not to use the combined tracks, but we often found it quite a pleasant option for holding our base footage — an interview for example, where you never want to have the audio go out of sync — leaving the lower audio for music and sound effects. You can always move the sound track into the dedicated audio section later, but it requires un-linking from the video track first, a step we wish weren’t necessary. Likewise if you drag the video to a V-only track, the audio will disappear off the timeline, and dragging back to the combo track will not make it reappear. This could become a headache if you are moving quickly and don’t immediately notice your mistake. Again though, the user has the option to use the combined tracks or not.

There were also a few other small timeline quirks. If you expand and enlarge an audio track to see the waveform, then collapse the view and re-expand, the waveform is once again small. It would be nice if it remained at the size you last left it. Also we miss the drag to zoom feature on the timeline that is available on other editors. Indeed there isn’t even a zoom in/out button on the default layout, which left us no initial way to zoom in on a laptop containing no number pad and no middle scroll wheel function. It seems there was a feature where one could control-two finger drag to zoom on the touchpad, but while an icon appeared to show us we could do it, it wasn’t actually working for us. We ultimately went into the key assignments and dedicated new keys for zooming.

Other new items include the GV browser for managing content, Quick Sync Video support and accelerated 4K h.264 and proxy mode, so both the latest workstations and older machines will benefit from version 8.

For keyframing and manipulation, we’re absolutely in love with the layouter. This is not a new feature, but it’s worth noting. Think of it as the standard effects tab in Premiere or Final Cut, but with more of an After Effects timeline feel. Ultimately it’s the same thing, but it just feels right in EDIUS where it comes off almost like its own separate sub-program rather than just an additional window.

EDIUS prides itself on its fast file importing, ability to handle an excessive amount of file formats natively and universal-format timeline. Import speed is blazingly fast and we were immediately able to throw clips of all kinds into the same timeline and make them play together happily. Naturally though, when someone claims you can “edit anything, anywhere,” you immediately want to put them to the test, and indeed we did find a few obscure codecs which did not import. Employing Sorenson Squeeze, we created a test clip in Webm (vp9), MKV (vp9), and HEVC 1800kbps, and DNxHD. Each of these gave an error message upon import. DNxHD support is available with an optional plugin on Pro (which we did not test) and comes standard on the Workgroup version. We admit it will be rare — though not inconceivable — that anyone is going to want to directly edit from WebM source footage, however we would hope that HEVC/x.265 support is on the horizon (we know it’s a little early) and MKV would be a nice bonus. None of these will probably be relevant for productions, but might be useful in the corporate world. For standard camera footage though, EDIUS more than has you covered and easily recognized footage that we could not import into other mainstream edit programs without third party support or pre-transcoding. This support includes Canon’s XF-AVC, Sony’s XAVC, and Panasonic’s AVC-Ultra/Intra.

With EDIUS 8, Grass Valley has stated they will be committing to “…continuous improvements, all provided at no extra cost to users.” We would love to see this include tweaks for convenience and edit speed. There was a search function for media for example, yet none for quickly finding something specific in the effects palette. We could also hope to see even basic caption support come to the pro version in the future. One extremely notable feature marked as being on the horizon is background rendering, making editing on EDIUS even faster. Clearly the future of 8 looks bright.

Overall EDIUS 8.1 seems incredibly stable and within our limited testing time, never once hiccupped in the slightest. Returning users will find plenty of performance and interface tweaks to justify an upgrade even if they have no need for extended format support. The EDIUS software is available as a complete software purchase. This is something we utterly applaud, though adding a monthly rental option as well could be a draw to part-time editors who can’t afford or commit to a full license, it might also help draw new users who might otherwise avoid demo versions to try out the program, and EDIUS 8 is an edit solution that is definitely worth trying.