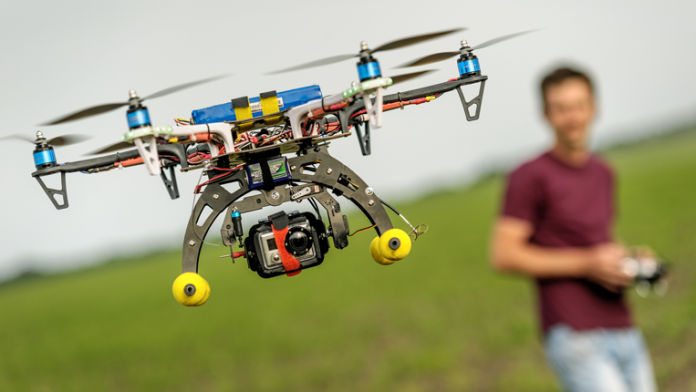 Technology has given filmmakers a wide assortment of tools with which to craft their stories.  One of the more recent advancements to gain prominence within the video making community is autonomous recording, where other devices are shooting footage, rather than you controlling the camera. There's been some debate about filmmaker rights and the use of autonomous video for commercial purposes.

Autonomous video refers to any footage captured with the aid of inanimate objects.  There are a few devices which could be considered for this, but the most common one people use now are drones. Drones themselves aren't new, but as they become cheaper for average consumers, and cameras continue to shrink in size and weight, they're being used more and more frequently.

Drones have presented amateur filmmakers some interesting opportunities, allowing them to record footage from angles and heights they could have never achieved before. There's a problem, however. Technically speaking, you're not legally allowed to use autonomous footage in your projects commercially, which even includes getting paid for wedding videography. While recent changes in the laws have paved the way for general commercial drone photography use, currently only a handful of major businesses are allowed to do so under strict regulations.

The legal reasoning behind it has more to do with fears over unwarranted surveillance, but the latest argument being made is over ownership. Some contend that footage shot autonomously cannot be owned and a person has no right to claim it. Since you technically don’t “own” it, you obviously can’t sell it as yours either.

Some contend that footage shot autonomously cannot be owned and a person has no right to claim it.

While there are legitimate concerns regarding drone photography use, ownership rights shouldn’t be among them. Autonomous filming is yet another tool in the box for filmmakers to help them achieve shots that wouldn’t otherwise be possible. The fact that you aren’t holding the camera isn’t a factor. After all, filmmakers now don't legally make that distinction for camera crews. Could you imagine Janusz Kami?ski, Steven Spielberg’s director of photography, suing for the rights to all of Spielberg’s footage simply because the director didn’t shoot it personally?

The notion itself is kind of ridiculous and so too are the arguments for not owning autonomous footage. If you’re lucky enough to have a crew on your set — or just a friend holding the camera — they’re recording scenes based on the ideas you crafted and mapped out. Simply because your friend is holding the camera and helping you execute those shots doesn’t mean it’s not your footage. Videos are a sum of many different parts, but it’s the overall idea and result which make it uniquely yours.

As with any project, every shot you record is planned out and captured in a specific way to help tell your story. Your ideas and execution are what makes the footage yours, not the manner in which it’s recorded. If that weren’t the case, some could argue using a gimbal or crane to record footage falls into the same autonomous category. Even stranger, there are aerial cameras that filmmakers have used legally for years, but drones don’t fall into that category for some reason.

Since the inception of filmmaking, people have crafted a multitude of ways to capture footage in more accessible ways; drones aren't the exception. The footage you plan out and implement in your storytelling is yours, regardless of how you capture it. Hopefully, future legislation will come around to this idea, and allow filmmakers the use of another handy tool.