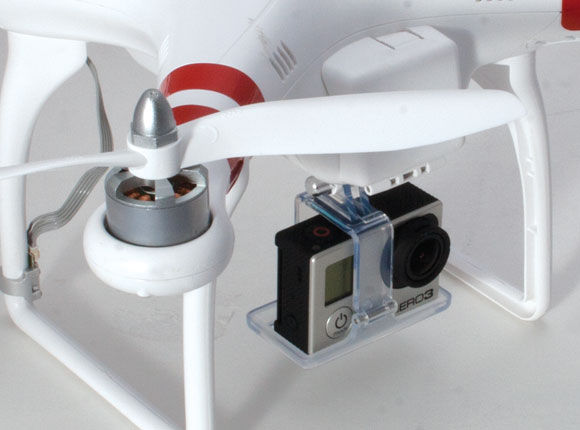 We have officially entered a new era that might be identified as the drone age, and in terms of the potential of this technology for media makers, the sky truly is the limit — at least for now.
Yet despite the growth of the drone industry, only DJI stands out as a major market leader. In recent history, we’ve another example of a single 800-pound gorilla dominating a market, leading to stagnant innovation: GoPro. As consumers, we should learn from this and support companies that provide DJI real competition.

Creating captivating video is all about showing the viewer unique and interesting perspectives, and there are few shots more exciting than aerials. Prior to the drone age, flyover shots were only attainable by big-budget productions with enough cash to send shooters up in actual airplanes or helicopters with paid pilots.

The low price point of video-equipped drones has made eye-in-the-sky camera perspectives hugely popular with professional and hobbyist video producers, and aerial shots are becoming increasingly common, even in low and mid-level productions. The ability to shoot dramatic aerials of a local client’s own business, neighborhood or event is a hot new novelty that instantly adds pizzaz to any production.


With video-equipped drones capable of capturing professional quality video at resolutions up to 4K, DJI is poised to become the Coca-Cola of prosumer UAV drone footage.

Like Coca-Cola and Kleenex, the name GoPro has become synonymous with the product category that it established. GoPro defines extreme POV video. With video-equipped drones capable of capturing professional quality video at resolutions up to 4K, DJI is poised to become the Coca-Cola of prosumer UAV drone footage. DJI’s Phantom line has set the standard for aerials in the drone age and continues to be the favorite choice of mass market video producers, professionals and hobbyists alike.

There’s no questioning that DJI produces quality products. The question to ask is: Who else will enter into this space in a seriously competitive way? Competition in the free market does several things that benefit customers. Competition drives innovation. As innovative as any company may be, technologies develop faster when multiple companies must compete for a sale.

Another benefit of competition is price. Companies seeking to gain a competitive advantage often lead to lower prices, which in turn drives even more cost-saving innovations and efficiencies. Corporate competition also often results in improvements in quality and performance. Camera companies innovate new imaging sensors, lighter lenses and superior optics, longer battery life and higher resolution images because they are in a competitive market. And companies that deliver pizzas or parcels compete to get their payload to their customers faster than their competition and may do so with drones. While DJI and GoPro both produce quality gear, let’s not let their dominance blind us to worthy competitors in the market.