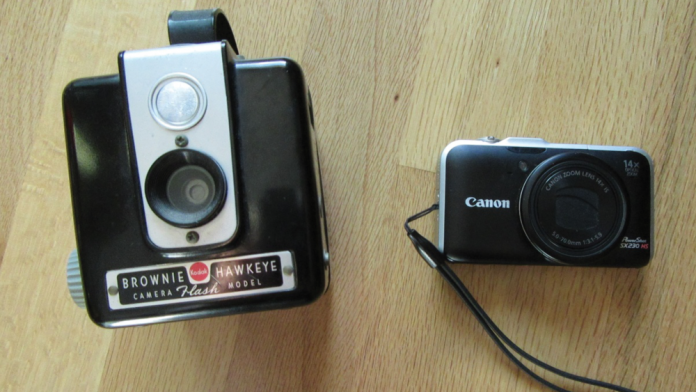 I still have my first still camera, a Kodak Brownie Hawkeye. It had two functions: to snap a photo and to advance the roll of film. Originally designed in 1949 by Arthur H. Crapsey, with its Bakelite body and cubist design, it was a step up from an original pinhole camera. It felt good in the hands and delivered no-frills, factual photos.

Today, I use a Canon Powershot SX610. It has lots of functions. It has a flash and many different filters. It can take video. It can take a black and white shot, or sienna, or vibrant. I can shoot from the top of a building and make all the traffic below look like toys. I can shoot photos in a dark place that come out amazing. The Canon is one quarter the size of the Kodak Brownie Hawkeye.

Having been involved in the video production industry since the 1980s, IÃ¢ÂÂve seen the evolution of video cameras as they have moved from clunky VHS Video camcorders through the Betacam SP standard-definition years, to digital HD cameras, XDCams and recently the memory-card based cameras like my husband MarkÃ¢ÂÂs shiny new toy, the Sony FS7.  We also sometimes work professionally with a DSLR but you have to add components like audio receivers and lights to get good results.  Mark refers to this as a Frankenstein set-up.

Years ago, Mark rigged up a helmet cam for use in the first mountain bike instructional video ever made, Ã¢ÂÂThe Great Mountain Biking Video.Ã¢ÂÂ The helmet cam,  POV cam or lipstick cam, as it is otherwise known, seems a great barometer of small camera technology. MarkÃ¢ÂÂs incarnation was smaller than others that had come before it; He stripped down a red motorcycle helmet and rigged a mounting for the first consumer color video-chip camera. He ran a cable from the camera to a padded backpack containing a Panasonic VHS portable video recorder and a DC-lead battery to power the system. It was heavy, unwieldy and the helmet was hot. It certainly made the collection of mountain-biking POV shots very dangerous. He wore it prior to the first-ever World Mountain Bike Championships in Durango, Colorado and followed ensuing cross-country winner, Ned Overend for a short time down some technical singletrack.

Today, we have GoPro and other cameras that make life so much easier when collecting sports media. They mount to a helmet or a surfboard, and police officers in many cities are mounting them to their chests as we speak.

TodayÃ¢ÂÂs cameras are small computers. Computer technology has been commingling with camera and voice technology throughout this century.

As technology is said to be exponential, we have no reason to believe that small camera technology will come to a halt now. Of computers, futurist Ray Kurzweil has said they Ã¢ÂÂare going to keep getting smaller and smaller. Ultimately, they will go inside our bodies and brains and make us healthier, make us smarter.Ã¢ÂÂ The same is true of our cameras. They will continue to shrink in size, become more portable and more durable Ã¢ÂÂ ready to capture our next adventure.