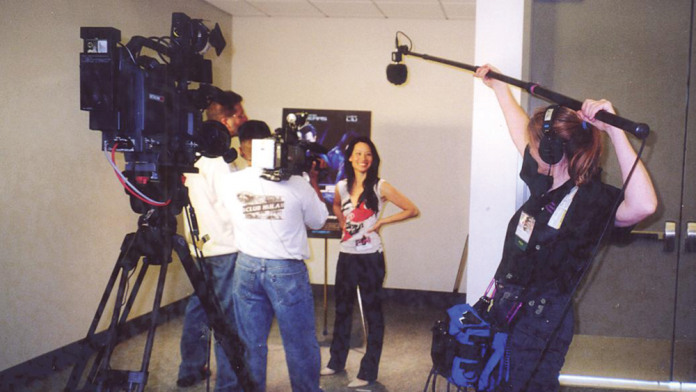 I balanced the boom pole over the head of Lucy Liu as she expounded on her role in “Ballistic” opposite Antonio Banderas. Realizing the sound was too low, I bent to raise the audio levels on my mixer. As I bent, the boom pole lowered and lightly tapped Ms. Liu on the head. I was mortified! It could have been the end of my career, just as it was getting started. But Lucy Liu, a kind soul with twinkling eyes, said, “Don’t worry about it.”

Realizing the sound was too low, I bent to raise the audio levels on my mixer. As I bent, the boom pole lowered and lightly tapped Ms. Liu on the head. I was mortified!

So I didn’t worry about it. But I did improve my boom pole operation skills over the next 15 years. This little mishap occurred in 2001, and I have been using the same Schoepps shotgun mic on hundreds of video productions ever since.

Here is my advice for the erstwhile beginning audio technician trying to decide whether to purchase a shotgun or a lavalier mic.

On a typical video shoot, the Modus Operandi is to use both a boom-mounted shotgun mic and a lav mic, but if you are just beginning to build your audio arsenal, then purchase the shotgun mic first. It can be either handheld or mounted to a boom pole.

In run-and-gun celebrity interviews such as the one with Lucy Liu, you won’t have time to pin a lav mic on the talent. It will be up to the producer whether they want you to use a stick mic or a boom pole. Unless the talent knows how to use a stick mic, talking into it and not waving it around and generating inconsistent sound—a nightmare for the editor — the shotgun on a boom pole will be a better bet. You, the human C-stand, will position it out of the camera frame and try not to cast any shadows on the face of the talent. If there is unavoidable lighting that would cast a boom shadow on the talent’s face, then come from underneath the talent with the boom.

In a recent shoot involving corporate interviews, the client asked for the boom only and no lav. He was concerned that the interviewee would touch or brush the lav with his hands, or that if the interviewee moved, you would hear the static sound of fabric. These are valid concerns, so I positioned the boom on a C-stand and sat at a conference table where I panned the levels so that channels one and two both received the audio feed.

I worked with a producer for Crime Watch Daily who said he wanted me to use both the boom and the lav for the interviews. His comment: “if you have the option of both, why wouldn’t you use both and have a backup?”

You will be able to get away with using only your shotgun mic on many shoots. Purchase the best one you can find, because it can serve you throughout your entire career. And when you can, get yourself a good lavalier mic system simply because it’s the professional thing to do.

A few years ago, I was tapped by a UK production company to join their team on the USS Stennis. I brought both my boom pole and my lav system—but it was the lav that brought home the sterling sound from the cockpit of the Grumman C2 Greyhound cargo aircraft, where it was impossible to wedge myself in there with a boom pole. The lav was also critical on the aircraft carrier deck when the talent strode 100 yards away from me and my boom pole.

Remember, a professional audio tech needs to be ready for any and all situations, but if you have to choose, choose a shotgun mic.