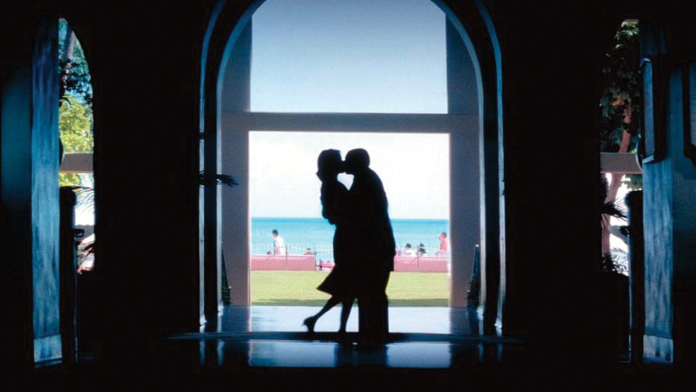 One scene in particular that always comes to mind when thinking about lighting in film is the beautiful silhouette scene from Paul Thomas Anderson’s “Punch-Drunk Love.” In it, the movie’s protagonist, Barry Egan, reunites with the love of his life, and they embrace each other in perfect silhouetted. I think the main reason I can’t instinctively think of memorable scenes with the standard three-point lighting setup is that the setup doesn’t excite me. Three-point setups feels utterly boring compared to more unique lighting like the silhouette scene in Punch-Drunk Love.

What is three-point lighting?

Remembering back to my first photography class in high school, three-point lighting was the only lighting setup we learned in the course; it’s considered the standard setup. In three-point lighting, there’s a key light, a fill light and a backlight. There are other variations, but that’s the typical arrangement. The key light is the most dominant of all the lights and is usually placed on the side or the front of your subject.

Next, there’s a fill light, a softer light that fills in the shadows that the key creates. Fill light can also be bounced from the key light using a reflector, which is tool that’s used to reflect light back onto your subject; I know this with a passion because my partner in my photography class would always get way too close to my face with a bounce reflector and shine light right into my eyes.

Lastly, there’s the backlight light, which is a light that’s placed behind your subject to separate your subject from the background.

This is the standard lighting arrangement mainly because it illuminates your subject with just the right balance between shadows and highlights while still keeping things three-dimensional.

Since three-point lighting is the go-to standard, it’s often believed to be the only right way to light subjects, leading to creators using it excessively. And due to its widespread presence in all sorts of projects, it doesn’t catch our attention; we’ve seen it thousands of times. I mean, are you mesmerized every time you see another iteration of Andy Warhol’s variously colored Marilyn Monroe series? Probably not, since the style has been exploited in dozens of different situations.

Three-point lighting also creates an image that, overall, feels pretty neutral. I personally like a lot of contrast and dramatic lighting in the films I watch, and in my own work, because it makes a very strong artistic statement about how you want your images to look and feel. Three-point lighting often nullifies that statement for balanced, pleasant lighting and fully illuminated subjects.

If you want to excite your audience and improve your skills, you’ll need to take risks with your lighting.

Now, in defense of three-point, you can make adjustments to your lights to make the setup less neutral and more moody, but you’re never going to achieve the same dramatic shadows if, for instance, you were only using a single key light.

The whole setup just seems too safe. It’s almost as if videographers are using it as a crutch because it’s been proven to work. But, if you want to excite your audience and improve your skills, you’ll need to take risks with your lighting.

But in narrative and even documentary production, it really is best to approach each scene’s lighting individually, without automatically defaulting to the standard three-point arrangement. Ask yourself: how should I light this scene to fit the mood I want? Would a three-light setup work best, or would the scene be more interesting with less or more light? I highly encourage you to experiment with your lights and to not restrict yourself to a three-point setup just because that’s supposedly the right way to light things.

Three-point light may be overused to the point of it being a cliché bore, but in truth, it’s a necessary bore. It’s the foundation of how we light our subjects, and it’s a universally acceptable setup to use. Without it, there wouldn’t be a guide for us to follow when trying to light subjects properly. Even Anderson’s “Punch-Drunk Love” still often uses three-point lighting when appropriate to the story. However, when it’s used excessively without break, three-point lighting will leave a project bare and forgettable. Three-point lighting needs to be used with other unique lighting setups to create a balance between the fundamental and the expressive.

Sean Berry is a professional writer and aspiring graphic novelist.