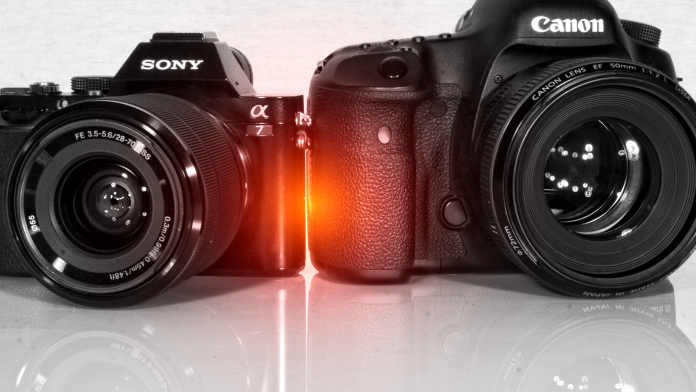 It's over. Young video shooters and filmmakers can no longer remember what life was like before large sensor, interchangeable-lens cameras. Deep depth of field doesn't have a negative stigma with them. They don't feel the need to take every shot with a wide aperture and an ND filter to get a filmic look; there are other ways to look cinematic. DSLRs are on their way out.

Look at Sony as an example: they discontinued every DSLR they make to focus on mirrorless cameras and are on their way to becoming a leader among professional photographers. Panasonic made a camera that looks a lot like it's built for stills, but it's video-first and it's mirrorless.

The death knell for DSLRs was Canon's recent statement that they are prepared to allow a new mirrorless line to cannibalize their DSLR business. Canon says they will “actively roll out products for a growth market even if there is some cannibalization.”  Even the venerable Canon, the last of the major camera manufacturers to bring 4K to their consumer cameras, has acknowledged that the future is mirrorless. They're also making prosumer interchangeable lens VIDEO cameras. It's a remarkable move, considering Canon is still the world's leader in DSLR cameras and lenses.


Even the venerable Canon, the last of the major camera manufacturers to bring 4K to their consumer cameras, has acknowledged that the future is mirrorless

Even so, video shooters need a few features that camera manufacturers are hesitant to put in their mirrorless cameras: adjustable grips, external audio controls and much bigger batteries, to name a few. These features appear in higher-end cinema cameras like the C200 or the FS5, but we’ve yet to see a successful interchangeable-lens camera under $2,000 dollars that offers these seemingly basic features. Why has there been no 4K successor to the Sony VG-30? Considering consumers generally liked that camera, we suspect it didn’t sell well. It’s possible people would rather have a mirrorless camera that also shoots stills.

What's next? An enthusiast-priced, video-first, interchangeable-lens camera? That'd be nice, but I don't think it'll happen. What is the incentive? Only a fraction of people who buy interchangeable-lens cameras do so primarily because they want to shoot video. And video shooters seem to be generally happy with shooting video on a camera whose form factor is designed for stills shooting.

DSLRs certainly still have a place in the video world. I shot with the D850 recently and loved it as a hybrid shooters' camera, so long as that person puts stills before video. But the DSLR craze that overtook the video industry back in 2008 is over. Despite the fact that the killer features video shooters love could be put into DSLRs, the fact that they happen to be in mirrorless cameras exclusively means there’s little reason to choose a DSLR over a mirrorless camera or camcorder.