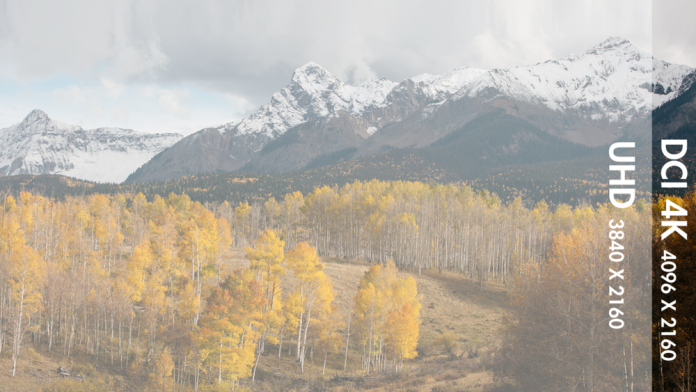 So you’ve decided it’s time to upgrade your camera. Being an astute and well-studied filmmaker, you’ve come to the decision that your new camera must have the ability to record 4K. Even though most content is still shown in HD,  4K is quickly becoming a new production standard. Big box stores are stocking more shelves with 4K displays, Youtube has had 4K for a while and many clients expect a 4K delivery.

After reading through spec sheets of every Canon, Sony, Panasonic and Blackmagic camera in your price range, you come to the realization that there are in fact two 4K standards: DCI 4K and UHD. Sitting perplexed in your barcalounger staring at your computer screen, you wonder, what's the difference? Does it matter?  Is one better than the other? Is In-N-Out still open? The biggest question is, “What should I get?” There isn’t a large quality difference between DCI 4K and UHD, so unless you have a specific need for DCI 4K, you might as well stick with the more common UHD standard.

Let's start by defining the differences. DCI stands for Digital Cinema Initiatives and is an agreed upon standard of the film industry for 4K movie production. It’s often referred to as C4K or Cinema 4K. UHD, or Ultra High Definition, is a consumer format designed for television and online content. The two resolutions are almost the same: DCI 4K is 4096 x 2160 while UHD is 3840 x 2160. You’ll notice that the vertical resolution for both is the same at 2160 pixels, but the horizontal resolution is different for each, meaning the two standards have different aspect ratios.

UHD is exactly four times the resolution of HD, so it keeps the consumer-standard 16:9 aspect ratio. DCI 4K, on the other hand, is a little wider with an aspect ratio of 19:10. This really only matters when it comes to your final delivery. If your final destination is YouTube or Television, then UHD is perfect because Youtube has a native 16:9 aspect ratio—but if you are shooting content that will be projected in theatres, DCI 4K is a better choice. The other big difference between the two are their frame rates, DCI 4K is true 24 frames per second while UHD runs at 23.98 frames per second.

If your final destination is YouTube or Television, then UHD is perfect because Youtube has a native 16:9 aspect ratio—but if you are shooting content that will be projected in theatres, DCI 4K is a better choice

While either format can be used for film production or television without a lot of extra work, something to consider is whether you will be cutting the footage with other cameras. If, for instance, this is a second camera in your toolbox and you already have a UHD 4K camera, it may be wise to match that. You don’t want to be mixing aspect ratios and frame rates on your timeline. I know what you are thinking, “but the DCI 4K has more pixels — MORE PIXELS!!” Yes it does have more horizontal pixels, but if you have to crop the sides or letter box the tops for television or Youtube those extra pixels won’t do you that much good.

Generally, you should consider that the question of DCI vs UHD is a secondary factor and concern yourself more with image quality, compression, camera ergonomics and how well it will perform in your workflow. The reality is, at these resolutions, no one is really going to notice if you do a little cropping to fit DCI 4K into UHD or UHD into DCI 4K on your final product. For that reason, I wouldn’t recommend you spend extra on a camera or choose a camera solely because it shoots DCI 4K — the minor differences aren’t going to be worth it, all else being equal.