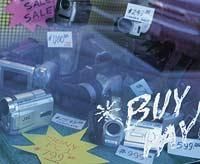 I recently found myself strolling the streets of Times Square in New York for several hours on a Saturday night. As an airline pilot based in New York, I have a small commuter apartment in Greenwich Village in Manhattan. But I spend most of my time at my home in Denver, which is the headquarters for my aviation video production company.

When I’m in the Village apartment, I rarely go uptown; it had been about six months since my last foray to Times Square. But that day my wife had phoned to tell me about a piece she had seen on television featuring a great deli uptown. So I went to Fifty-third Street and, after a great sandwich, strolled Seventh Avenue on the way to the D Train back home.

The prices in the windows of the video stores were outstanding. Since I’d been considering adding a Sony DCR-PC1 Mini DV camcorder to my equipment inventory, I thought I’d see if I could get a good deal. I had my eye on the PC1 for a number of reasons: its small size, DV format, i.Link port, and its protocol compatibility with my other Sony gear.

The first store I saw had the PC1 in the window with a sign that read, Sony PC1, $799 Camera Only. I went in to see what was missing in their "camera only" deal. The salesman said the price was for the camera alone, without any accessories. I asked to see what accessories would normally come with the camera, and he brought out a new camera in a box.

When he opened the box, there was the standard battery, battery charger, instruction book/warranty card and dubbing cables. I asked how much for the entire set. The salesman said, "$1,299" with a straight face.

"You can’t use the camera without the accessories," he said.

"Sure I can. I already have a battery charger and cables, and I can get a battery anywhere. I’m not going to pay $500 for the accessories."

"But you need the accessories. You can’t buy the camera without them."

"We don’t sell it by itself," he smiled.

I walked out onto Seventh Avenue, determined to see if this was an aberration. The next store had the PC1 in the window also. I asked this store’s salesman how much for the camcorder.

"Are you ready to buy right now, or are you just checking price?" he asked.

"Okay," he replied. "Come this way." We walked down to the end of the counter and he produced a very shopworn box with an obviously heavily-handled, display camera.

"Of course. I just wanted to show you the camera." He picked up the phone and spoke briefly in a language I didn’t recognize. "They are bringing the camera down from the storeroom upstairs."

While we were waiting for the camera, he tried to up-sell me on an infrared lens accessory. He put it on the camera and showed me the difference in low light situations. I’ll admit it was an impressive demonstration. But I didn’t really need this camera for low-light shooting.

I already have a TRV-9, which has outstanding low-lux capability. I wanted the PC1 so I could throw it in my flight case and have it with me while I fly, without having to lug around any additional gear.

Shortly after I told him I didn’t want the IR attachment, he went to make another call and then came back and told me the camera was out of stock.

"Maybe you come back next week," he said.

At the next store, I immediately asked if they had the PC1 in stock.

"Of course," the salesman replied, "we have it in the window."

"Do you have a new one in a box, with all of the accessories?"

"I’ll give you $800, and I’m ready to buy right now." The salesman picked up the phone and made a call. Could it have been to the same guy from the other store?

"We’re getting it from our storeroom. Be here in five minutes," he said.

While we were waiting, he tried to convince me to buy the JVC GR-DVM50U. It was a similar-sized Mini DV camcorder, and came bundled with software to load still photos.

"What kind of computer do you have?" he asked me.

"A Pentium III/500. But I’m not planning to load pictures from this camera to my computer. I already have a digital still camera."

"But," he pressed, "the JVC is a much better camera. The Sony only has 1.5-million pixels. The JVC has three million, twice as many." (I was already aware, from my own research, that both camcorders have 680,000 pixels. But I let him give me the pitch.) "The JVC has a glass lens, but the Sony has a cheap plastic lens." (Not true, the Sony has a Carl Zeiss lens.) "But, of course, the JVC costs a little more."

"How much more?" I played along.

"I think I’ll stick with the Sony," I replied. Not too surprisingly, the phone rang.

I went to every video/electronics store on Seventh Avenue between 53rd and 42nd, on both sides of the street. It was the same routine at practically every store. A few of the stores simply told me they didn’t have the PC1, even though they all had one on display in their windows. Virtually every other store mysteriously didn’t have it in their warehouse or storeroom after we had consummated a deal.

I finally got on the D Train convinced that the PC1 is the most ubiquitous piece of vaporware in all of New York. When it’s time to buy my PC1, I’ll stick to one of the better mail-order outlets that can guarantee delivery. I’d rather shell out slightly more money for a camcorder that’s really available.

There was an upside to the trip uptown, however. In addition to the great deli food, I found a peddler who sold me a real Rolex watch for only $15. He told me it would have been $3,000, but he didn’t have a box.