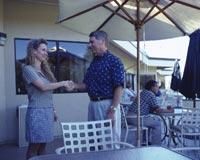 The idea of "leasing" cable channels has been around almost as long as the cable industry. Ever since the FCC introduced the concept in 1969, Congress, the cable industry and independent producers have been tweaking the regulations that govern leased access. The debate is ongoing, but many producers and cable channels have managed to work out deals that bring independent programming to local cable subscribers. This article explains how you could be part of this profitable industry.

Before you run down to your local cable office with your current demo tape, consider what producing a leased access program really means. It’s not always easy and without careful business management it can be expensive. But with the right planning and execution, leased access can be a satisfying enterprise–professionally and financially.

As broadcasters and cable channels cast wider nets for viewers, the need for local TV programming grows, creating a gap for independent producers to fill. By keeping your program idea simple, local and high quality, it will be easier to pitch to cable operators, sponsors and viewers.

In choosing a format for your show, look for events already happening in your area. Find what’s unique about your region and promote it. There are a number of subjects that have already proven successful for leased access producers (see sidebar).

Dozens of cable channels are conceived every year but many of them remain idle for a year or more. Rather than lose their window of opportunity for a fresh programming idea, some new networks are willing to use leased access to build viewer recognition.

By taking a hard look at your market and choosing carefully, you can probably connect with a network that’s producing something your viewers want to see. You’ll be offering the network an exciting outlet it doesn’t have now in exchange for some of the ad spots. You’ll have the remaining ad time to sell to your own sponsors.

Most networks will give you a limited number of hours of programming per day, and they’ll all want to ensure that other programs that run on the leased access channel are good "companions" for theirs.

The business components of television–namely, accounting, marketing and sales–are as important as the craft of video. Although you may have the hottest TV show in town, if you don’t have a practical sales vehicle and a marketing plan, no cable operator will take your idea seriously.

Before you approach the cable company with your program idea, it’s important to understand the basic rules of leased access. The cable company is responsible only for giving you a rate quote. It is not going to tell you how to hook up, where to get the programming or how to fund it.

Not understanding this concept can start you out on the wrong foot. Do your research before contacting the cable company. (Visit the Leased Access link located on the Club Vid home page for information on leased access regulations).

Even if your cable company has a leased access application form, put together a good written proposal, or better yet a business plan, that answers all the questions the operator will want to know. Spell out the program synopsis, viewer demographics, sponsorship and funding, equipment, biographies of the principal owners/employees, financial statement and certificate of insurance.

Find out about the cable system’s local ad sales before you lay out your own sponsorship program. Competition for local ads can become an objection to your proposed leased access program, so it’s well advised to be prepared to counter any operator reluctance up front.

Cable salespeople will vigorously defend their territories and their customers. Any hint that a new local programmer may be shopping for those same customers in their territory can work against a leased access producer. One way over this fence is to approach regional advertisers.

Regional advertisers are larger businesses and tougher to sell so the market may be more open for a new sales effort. Because most cable sales people stick to their local markets, especially if they’re already successful there, it may be possible to coordinate with the cable reps to target complimentary regional advertisers. By working out a plan with the sales rep, a new programmer can take advantage of a wider regional market and not step into the cable rep’s territory. Say the rep sells 30-second spots to Fred’s local tackle shop to run on the national Outdoor Channel. You might be able to sell spots on your leased access hunting show to the area distributor of Jim’s Excellent Reels. Fred and Jim get double viewer exposure and both you and the rep pocket profits.

Offer the cable operator barter ad time. This is a standard industry practice where the producer trades ad spots on his show for carriage. Although this leaves the producer with fewer ad spots of his own, reduced leased access fees can free up needed cash.

If you have your own production facility, and the cable company does not, you’re in an excellent position to produce those ads. If you’re offering barter ad time for your program, an easy sell to sponsors will be supported enthusiastically, while one perceived as a tough sell or competitive with other programs will be received coolly or even actively opposed.

Before you start pitching ad spots to local businesses, remember this: many business owners mistakenly believe TV time is too expensive. Part of your sales job will be to educate potential advertisers about the affordability of local TV spots.

"We went to a clothing store in town–a mom-and-pop organization–that was having competitive problems," remembers Dan Reynolds of Video Vision. "The local Wal-Mart cut into their business quite a bit."

He told the owners that if they didn’t get a response from ads on his show, they wouldn’t owe him anything for the first month. If they did, he wanted them to sign a six-month contract. His unique approach worked.

"We produced the spot, let it run for a month and went back a month later. The owners said they were afraid that if I found out what response they got, I’d raise the rates. That was three years ago and they’re still running ads with me today."

Commercial time is typically sold to advertisers in 30- or 60-second segments. How much revenue is generated depends primarily on the program’s ratings, which provides "proof" of viewership. The more viewers, the higher the ratings and the more you can charge your advertisers. A leased access producer must be creative and flexible with audience measurement methods.

For example, run an ad for a store offering a deal advertised only on your show. The store management can track the number of purchases made as a direct result of your ad. You might use an 800 number for special promotions, the calls are logged and can be used to estimate ratings for the show. This will give you valuable information to take back to your retail sponsors.

Sponsors are one type of customer, viewers are the other. You can’t have one without the other. When you promote your program to viewers you also publicize it for current and potential sponsors. Since the cable operator is not likely to invest much effort in telling viewers about your show, if you don’t tell cable subscribers about your program, they won’t know it exists.

A short, well-written press release is the most widely used promotional technique for any business. To make sure yours receives proper attention, write it so it answers the stock journalism questions (who, what, where, when, how and why) and also leave the reader wanting to know more.

Some proven options for promotion are:

And let’s not forget the programming itself. Production quality is the most important issue for most cable systems. All programming on the system, whatever its actual origins, reflects on the system operator.

Cable companies love being associated with high-quality programming. Regardless whether you produce a show that reviews local restaurants, follows your town’s high school football teams or covers city council meetings, there will be a more positive response–from the cable company and the audience–if your program is produced and presented in a professional manner. If you’ve always wanted your own TV show, now you know how to get it.